Depape, 42, is a prominent nudist activist and hemp jewelry maker from Berkeley, and a member of the Green Party, the San Francisco Chronicle reported. He allegedly entered the home through a sliding glass door.

On 10/28/22, at 2:27 am, SFPD responded to the 2600 block of Broadway for a home break-in. During the incident an 82 y/o male was attacked. The suspect was taken into custody. The victim was transported to a local hospital. SFPD Chief Scott will address the media at police HQ.

Although it’s not completely clear, both men appeared to be fighting over a single hammer when police arrived on the scene.

San Francisco Police Chief Bill Scott said during a news conference on Friday that at approximately 2:27 a.m. on October 28, 2022, officers were dispatched to the Pelosi residence for a “grade-A wellness check.” When they arrived, officers encountered an “adult male and Mrs. Pelosi’s husband, Paul” in the Pelosi home, both holding a hammer.

“The suspect pulled the hammer away from Paul Pelosi and violently assaulted him with it,” Scott said. Officers “immediately tackled” Depape and took him into custody, the chief continued, adding that both parties were transported to a local hospital for treatment.

The suspect was allegedly clothed only in his underwear when he was arrested.

MORE: “The suspect was arrested in his underwear” and authorities have found an anti-government manifesto pic.twitter.com/DjilWBP5NH

Scott said there is an active investigation into the incident, and the motive is still being determined.

Depape is being booked on attempted homicide, elderly abuse, burglary, and other charges, he said.

Rep. Pelosi’s (D-Calif.) office released a statement saying Pelosi, 82, was hospitalized but is expected to make a full recovery. The speaker and her family “requested privacy at this time,” according to the statement. 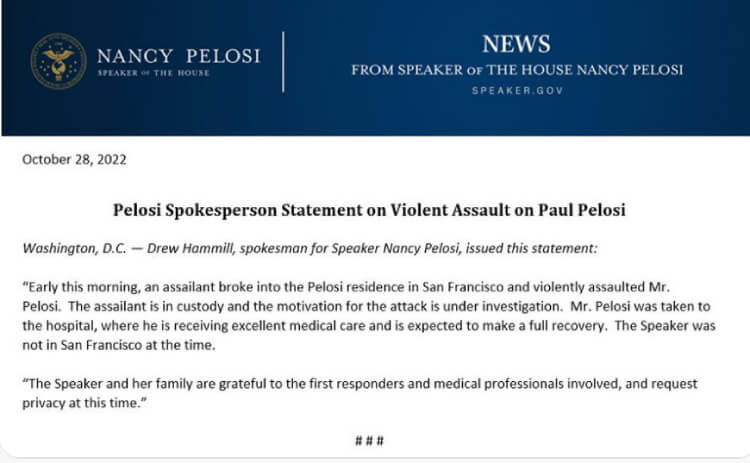 The White House put out a statement as well, saying that Joe Biden is “praying for Paul Pelosi and Speaker Pelosi’s whole family,” and is asking for the “family’s desire for privacy to be respected.”

The US Capitol Police also released a statement saying that they are assisting the FBI and the San Francisco Police “with a joint investigation” into the alleged break-in.

“Special Agents with the USCP’s California Field Office quickly arrived on scene, while a team of investigators from the Department’s Threat Assessment Section was simultaneously dispatched from the East Coast to assist the FBI and the San Francisco Police with a joint investigation,” the statement said.

Some conservatives on Twitter questioned how an assailant would be able to break into the Pelosi’s home given its high level of security.

“My firm served a lawsuit against Paul Pelosi one time in SF after attempting to serve at other residences,” tweeted civil rights attorney Harmeet Dhillon. “They weren’t home, but staff were, and multiple law enforcement officers were on the perimeter. Break-in is odd given this level of security.”

My firm served a lawsuit against Paul Pelosi one time in SF after attempting to serve at other residences—Napa, Georgetown. They weren’t home, but staff were, & multiple law enforcement officers were on the perimeter. Break-in is odd given this level of security.

Senator Rand Paul (R-Ky.) wished Mr. Pelosi a speedy recovery “unlike Nancy Pelosi’s daughter” who mocked the 2017 violent attack on the senator at his home that left him seriously injured. Part of Paul’s lung had to be surgically removed after a neighbor attacked him over his political views.

No one deserves to be assaulted. Unlike Nancy Pelosi’s daughter who celebrated my assault, I condemn this attack and wish Mr. Pelosi a speedy recovery. https://t.co/2LxIlbIYQP

Meanwhile, the left is stoking a narrative that the deranged nudist activist is a violent “right-wing extremist.”

According reports, the assailant’s actual target was Nancy Pelosi.

“The intruder confronted the speaker’s husband in their San Francisco home shouting ‘Where is Nancy, where is Nancy?'” according to a CNN source, who was allegedly briefed on the attack.

“This is nightmarish,” tweeted law professor and frequent CNN guest Laurence Tribe. “I wish Paul Pelosi a full and rapid recovery. The far right has normalized the use of violence even against the families of public officials with whom somebody might disagree. This absolutely must stop.”

This is nightmarish. I wish Paul Pelosi a full and rapid recovery. The far right has normalized the use of violence even against the families of public officials with whom somebody might disagree. This absolutely must stop. https://t.co/TZbcCCqyHn

According to Heavy, Depape  is a member of the Castro Nudist Protesters and a “hemp artist.”

On a WordPress blog, Depape ranted about censorship by the “elites” and “ruling class.” He also appears to have a website that reads “da Jews.” Sixteen hours ago, he posted the headline, “Why Colleges are becoming Cults.” He ranted about movies, writing, “The critics are f****** commie gate keepers. They love the sh******* movies ever as long as those movies are sh**** because they where…”

Some of his posts allegedly referred to QAnon and former President Donald Trump. “Either Q is Trump himself or Q is the deepstate moles within Trumps inner circle. So Q/Trump sabotaged their child trafficking operations. #2 self inflicted wound. Trumps covert id or a Deep state mole? Was Q refering to this? Did Q do this? another video,” he allegedly wrote.

Depape was chosen to be the best man in a 2013 nudist wedding at San Francisco City Hall, according to the SF Chronicle.

David DePape was known as a “father figure” in a three-bedroom Victorian flat in Berkeley, where famed nudist activist Gypsy Taub lived with her three children and fiance Jaymz Smith prior to the wedding she had planned to hold on the steps of City Hall.

Igor Volsky, vice president at the Center for American Progress, tried to blame the attack on Republican political ads. 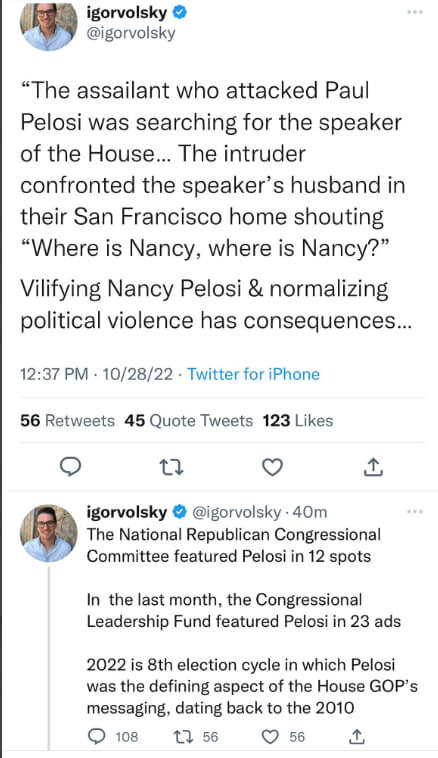 Dhillon pointed out on Twitter that “security cameras are everywhere” in the area so there should be plenty of evidence for law enforcement to use in their investigation.

“We have been to many social events in the immediate vicinity as well. There are security cameras everywhere, and many homes have private security,” she wrote. “Whatever happened, law enforcement should have plenty of evidence to get to the bottom of it and find the attacker(s).”

The attorney went on to note that even in wealthy San Francisco neighborhoods, break-ins have become common.

“The level of security for most people in SF is at an all-time low in the 20+ years I’ve lived here,” Dhillon tweeted. “Even in wealthy neighborhoods, hot prowl burglaries are common, almost routine, no one feels secure. If this can happen to the Pelosis (where was security?) what about rest of us?”

Paul Pelosi was arrested on May 28, 2022, and later charged with driving under the influence and causing injury “based upon an automobile collision,” and having a blood alcohol level above 0.08 percent, according to the Napa County District Attorney’s Office.

Pelosi also allegedly had a drug in his system, Fox News reported at the time. Pelosi allegedly injured the other driver “while under the influence of an alcoholic beverage and a drug and under their combined influence,” the first count in the two-charge complaint read. Pelosi’s attorney, Amanda Bevins, told Fox News: “I believe that the drug reference is part of the statutory boilerplate language in the complaint.”

According to CNN, Depape wanted to tie Paul Pelosi up until the Speaker got home, and Pelosi was able to dial 911 at the start of the altercation.

Pelosi managed to keep the line open and the dispatcher could hear a conversation in the background, according to the law enforcement source.

Pelosi was talking in code, said the law enforcement source, providing enough detail so that the operator overhearing it could understand that there was something wrong. At the same time, Pelosi seemed to be trying not to make it obvious to the intruder that he had an open line, the source described.

The source said the dispatcher could hear Pelosi speaking about what was going on and dispatched police to check on the house.

The struggle with Pelosi was captured on a police body-camera as police came through the door to intervene, according to one of the sources.

In an audio recording of the Pelosi’s 911 call, dispatcher told police that the reporting party (RP)—Pelosi—said there was a male in his home who wanted to wait for his wife, and that he didn’t know who he was, but he was a friend.  The dispatcher said that Pelosi (RP) sounded confused.

The FBI visited Depape’s Victorian home/commune, which is dubbed a “hippie collective” by neighbors. It does not look like anything most people would consider “MAGA country.”

According to Politico, a third “unknown” person opened the door for the police.

* How someone broke into the home of one of the richest and most powerful families without setting off an alarm.

* Who is the "unknown" person who opened the door for the police?

* Where is the video? pic.twitter.com/eaQCjiqycP

In its criminal complaint released Monday (eight days before the midterm elections), the Biden Department of Justice detailed the nudist’s alleged kidnapping plot against Nancy Pelosi.

A California man was charged today with assault and attempted kidnapping in violation of federal law in connection with the break-in at the residence of Nancy and Paul Pelosi in San Francisco on Friday.

According to the complaint, David Wayne DePape, 42, of Richmond, was arrested on Friday inside the Pelosi residence by San Francisco Police Department (SFPD) police officers responding to a 911 call from Paul Pelosi, husband of U.S. House of Representatives Speaker Nancy Pelosi. Paul Pelosi later described to police that he had been asleep when DePape, whom he had never seen before, entered his bedroom looking for Nancy Pelosi.

According to the complaint, minutes after the 911 call, two police officers responded to the Pelosi residence where they encountered Paul Pelosi and DePape struggling over a hammer. Officers told the men to drop the hammer, and DePape allegedly gained control of the hammer and swung it, striking Pelosi in the head. Officers immediately restrained DePape, while Pelosi appeared to be unconscious on the ground. As set forth in the complaint, once DePape was restrained, officers secured a roll of tape, white rope, a second hammer, a pair of rubber and cloth gloves, and zip ties from the crime scene, where officers also observed a broken glass door to the back porch.

The Special Prosecutions Section of the U.S. Attorney’s Office for the Northern District of California is prosecuting the case.