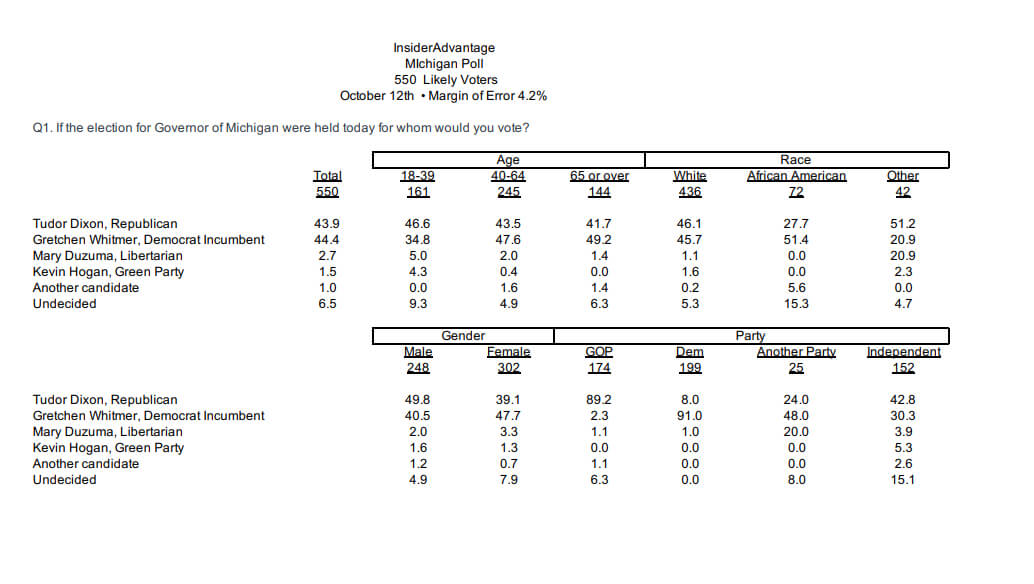 Whitmer’s lead over the Trump-backed first-time candidate has a RealClearPolitics average of +10.3, but her lead has been softening in recent days.

According to Insider Advantage, Joe Biden’s approval rating has cratered to 37 percent since last month when he enjoyed 45 percent approval. The poll showed that 55.6 percent of likely voters disapprove of the job Joe Biden is doing. Another 7.4 percent of respondents had no opinion. Surprisingly, the poll showed Biden to be more unpopular with black and “other” (mainly Hispanic) voters than white voters, with only 27.8 of black voters and 11.6 “other” voters having a favorable opinion of him. Among white likely voters, Biden has 41.3 percent approval, and he continues to poll worse among men (27.8 percent) than among women (44.7 percent).

Biden’s term in office has been marked by a series of self-inflicted disasters and failures, including his botched withdrawal from Afghanistan, the ongoing COVID pandemic that he promised to end, out of control inflation, high gas prices, the border crisis, executive overreach, his increasingly authoritarian behavior, intentionally divisive/woke policies, his declining mental state, the recession, and lately, his demonization of  Trump supporters.