A Croatian member of the European Parliament declared on Twitter Wednesday that the European Union’s purchase of far more experimental COVID-19 vaccines than needed amounted to the “biggest corruption scandal in the history of mankind.”

During an EU special committee hearing on COVID-19 Monday, Pfizer executive Janine Small admitted that its COVID-19 “vaccine” was not tested during clinical trials on its ability to prevent transmission before it entered the international market.

In a video posted onto Twitter, MEP Mislav Kolakusic assailed European Commission President Ursula von der Leyen for greenlighting a secretive contract with Pfizer that resulted in a massive oversupply of the unproven vaccines, referring to her as “Mrs. 4.5 billion doses.”

Von der Leyen told the New York Times in April of 2021 that she had exchanged texts with Pfizer Chief Executive Albert Bourla for a month while the COVID vaccine contract was being negotiated. This revelation has prompted calls from some members of the EU Parliament for the exchange to be published.

“Today, ten of us MEPs asked her the following question: Why won’t she present to us, the members of the European Parliament, as well as the EU citizens whom she supposedly represents, the communication she had with Pfizer during the procurement of 4.5 billion doses of vaccines at a time when there was absolutely no proof of the effectiveness, and especially not of the harmfulness of that product,” Kolakusic said in the video.

He added: “Imagine, four and a half billion doses for 450 million people!”

Based on that calculation, each child, newly born, should receive ten doses of something that no one in the world except maybe two or three people, knows what it contains.

This is about secrets, protected patents. Don’t think that any kind of government or European agency knows exactly what is in that product. Nobody knows that. And nobody tells you that. They approved that vaccine, that pharmaceutical product, just based on statements of the pharmaceutical companies.

They did not get to see any medical research. To date, no medical research has been handed over to the members of the EU Parliament’s COVID committee or the European Medical Agency, to anyone.

How is that possible? We are talking about corruption here.

“The procurement of 4.5 billion products with the intention of injecting them into people, without anyone knowing what is inside, is surely the biggest corruption affair in the history of mankind, not only in the history of the EU,” the Croatian concluded.

The purchase of 4.5 billion doses of the covid-19 vaccine for 450 million EU 🇪🇺 residents is the biggest CORRUPTION SCANDAL in the history of mankind. pic.twitter.com/pCBWJMhwhr

During a press conference Wednesday, Romanian MEP Cristian Terhes tore into the Pfizer CEO for refusing to come to the special committee hearing.

Terhes displayed the contract documents released by the European Commission in response to their demands for transparency. 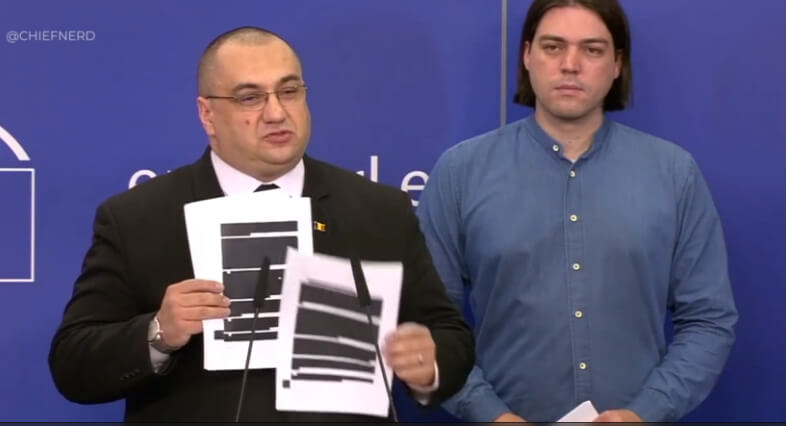 “What are they hiding?!” he exclaimed.

“The excess mortality rate all across European Union went up 16 percent more than the average of 2016-2019. Now if you look on the map here…the countries with the highest vaccination rate have now the highest mortality rate. So obviously we ask, is there a connection??”