Tesla CEO Elon Musk denied on Tuesday that he spoke directly with Russian President Vladimir Putin before he tweeted out his peace proposal last week to end the war in Ukraine.

Ian Bremmer, president and founder of the political consulting firm Eurasia Group, said in a mailing to subscribers that Musk told him Putin was “prepared to negotiate,” on the condition that Crimea remained Russian, Ukraine accepted a form of permanent neutrality, and Ukraine accepted Russia’s annexation of Luhansk, Donetsk, Kherson and Zaporizhzhia,” Vice News reported.

According to Bremmer, Musk said Putin told him these goals would be accomplished “no matter what,” including the potential of a nuclear strike if Ukraine invaded Crimea, which Russia annexed in 2014. Bremmer wrote that Musk told him that “everything needed to be done to avoid that outcome.”

In his tweet last week, Musk proposed a “redo” of elections in the annexed regions of Ukraine under UN supervision, that Crimea becomes “formally part of Russia,” “water supply to Crimea is assured,” and “Ukraine remains neutral.”

– Redo elections of annexed regions under UN supervision. Russia leaves if that is will of the people.

– Crimea formally part of Russia, as it has been since 1783 (until Khrushchev’s mistake).

Musk argued in a subsequent tweet that “this is highly likely to be the outcome in the end – just a question of how many die before then.”

The SpaceX CEO’s proposal prompted both Ukraine’s president, and the ambassador to Germany to lash out at him on Twitter.

“The only outcome is that now no Ukrainian will EVER buy your f…ing tesla crap,” he tweeted. “So good luck to you.”  In a subsequent tweet, Melnyk wrote: “F-ck off is my very diplomatic reply to you.”

“No, it is not,” the billionaire replied. “I have spoken to Putin only once and that was about 18 months ago. The subject matter was space.”

No, it is not. I have spoken to Putin only once and that was about 18 months ago. The subject matter was space.

We need a list of dim witted blue checks falling for this.
I’ll start. pic.twitter.com/8ENLSZERXc

Think (in ridiculous fashion) this is the first indication of what Putin's red line for nuclear use is:

'Musk said Putin told him these goals would be accomplished “no matter what,” including the potential of a nuclear strike if Ukraine invaded Crimea'https://t.co/7aTlTEb0Pt

If Bremmer’s allegations turn out to be untrue, it would not be the first time he was caught fabricating a story that went viral.

In 2019, in response to a Tweet, sent by former president Donald Trump that was criticized for praising North Korean dictator Kim Jong Un, Bremmer tweeted: “President Trump in Tokyo: ‘Kim Jong Un is smarter and would make a better President than Sleepy Joe Biden.'”

The fake quote was reportedly “shared by tens of thousands of people, including U.S. Congressman Ted Lieu (D-CA), journalists, and commentators such as Ana Navarro-Cárdenas, a well-known CNN contributor and guest co-host of ‘The View.’”

After the tweet went viral, Bremmer was blasted for spreading “fake news” on the platform. He later admitted that Trump had not in fact said those words, calling it “objectively a completely ludicrous quote.”

Trump at the time, used the incident to call for stronger libel laws. 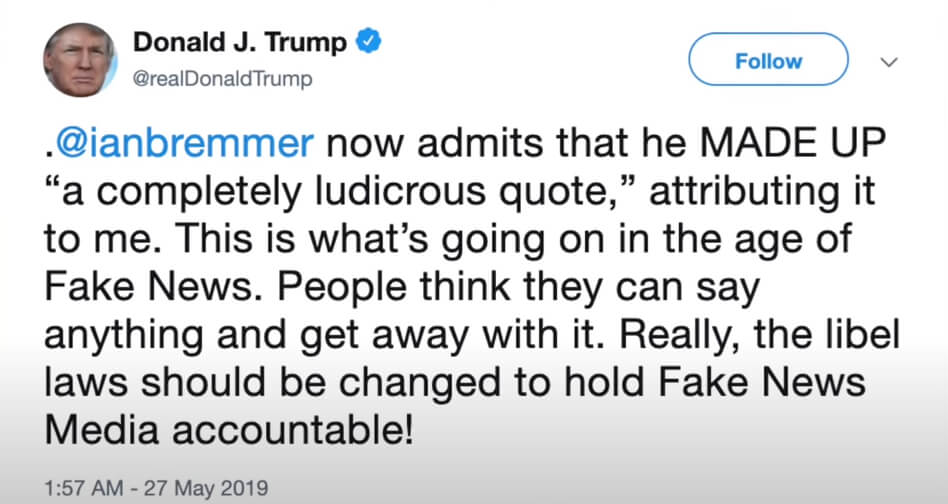