The United States government just awarded a new grant to British zoologist Dr. Peter Daszak, the scandal-plagued director of the EcoHealth Alliance, to study bat coronaviruses in Myanmar, Laos, and Vietnam,” including “viral sequences and isolates for use in vaccine development.”

EcoHealth Alliance has reportedly received $60 million in federal dollars over the past decade, and some of the funding made its way to the infamous Wuhan Institute of Virology in China.

The New York-based research organization funneled hundreds of thousands of American tax dollars to the Wuhan Lab to conduct dangerous gain-of-function research ahead of the COVID-19 outbreak.

Now, the National Institutes of Health (NIH) is giving EcoHealth $653,392 for a project, titled: “Analyzing the potential for future bat coronavirus emergence in Myanmar, Laos, and Vietnam.” The research started on September 21, 2022, and is projected to end on August 31, 2027. 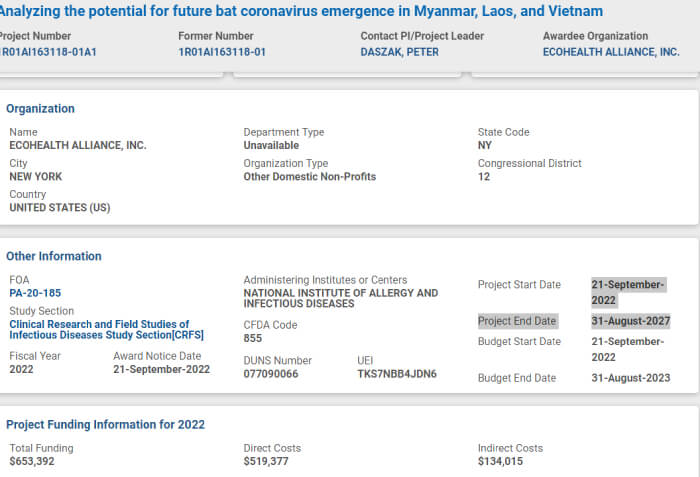 Within weeks of the first confirmed cases of COVID-19 in Washington state in January of 2020, NIAID Director Dr. Anthony Fauci was aware that the deadly virus may have leaked from the Wuhan lab, according to emails released in June of 2021. In January and February of 2020, Fauci was hearing from colleagues that the emerging coronavirus global pandemic looked potentially engineered.

As COVID-19 began to dominate the news cycle in early 2020, Fauci was faced with the possibility that the risky research he had advocated for, had lead to a deadly global pandemic, and he immediately set about suppressing any scientific analyses that pointed in that direction. Fauci had a conference call and exchanged emails with a number of doctors and virologists who were entertaining the lab leak theory, and soon after, they changed their mind about the virus being “somehow engineered.”

Beginning in March of 2020, his collaborator Daszak reportedly orchestrated “a behind-the-scenes bullying campaign” to make sure the Covid-19 outbreak was not linked to the Wuhan lab. Daszak got more than two dozen other scientists to sign off on a letter he wrote to the highly respected British medical journal, The Lancet, dismissing the lab leak hypothesis as “extremely unlikely.”

Dr. Andrew Huff, a scientist who worked with Daszak at EcoHealth from October of 2014 to April of 2016, sent a whistleblower complaint to Senator Gary Peters, the Chairman of the Senate Whistleblower committee, in February, stating that he believes Daszak works with the CIA and could in fact be “a double agent working on behalf of the Chinese government.”

Huff, a combat veteran, was the vice president of Data and Technology at EcoHealth, and worked “to develop novel methods of biosurveillance, data analytics and visualization for disease detection, and unique methods to identify disease emergence,” according to his bio.

In his letter to Senate Whistleblower Committee, Huff said that in late October 2021, he “came forward as a material witness and whistleblower related to numerous unethical and criminal behaviors that took place at EcoHealth Alliance. EcoHealth Alliance engaged in fraud against the U.S. government (Timecard Fraud and contract reimbursement fraud).”

He explained in his letter that “the EcoHealth Alliance and foreign laboratories did not have the adequate control measures in place for ensuring proper biosafety, biosecurity, and risk management in place, ultimately resulting in the lab leak at the Wuhan Institute of Virology.”

Huff said in an interview in February, that he thought it was bizarre that EcoHealth only interested in studying coronaviruses, instead on all the other dangerous infectious diseases out there. He told Conservative Review’s Daniel Horowitz that he believes Daszak is a “sociopath and a pathological liar.”

Huff’s book, The Truth about Wuhan: How I Uncovered the Biggest Lie in History, is slated to be released on November 15.

Despite these widespread concerns about EcoHealth, the Agency for International Development (USAID) awarded a $4.67 million five-year grant to the non-profit in late 2021. A group of 26 House Republicans sent a letter to USAID Administrator Samantha Power demanding answers when they found out about the grant in February of 2022.

“[We are] deeply concerned by this award given EcoHealth and Dr. Daszak’s troubling record of failing to report findings from federally funded research, refusing to cooperate with congressional oversight of federal funding awarded to the organization, and collaborating with the Wuhan Institute of Virology,” the lawmakers wrote.

Last November, Republican leaders on the House Energy and Commerce Committee sent a letter to the National Academy of Medicine asking them to investigate Daszak for misconduct, saying Daszak’s actions “may violate the NAM Code of Conduct and warrant urgent action.”

Issues of concern cited by the Republican leaders—led by Cathy McMorris Rodgers (R-Wash.)—included “Daszak’s refusal to answer Congressional requests for answers to questions relevant to the origins of the COVID-19 pandemic, Daszak’s failure to properly report his financial ties to the Wuhan Institute of Virology (WIV), Daszak’s leading role in shutting down all scientific discussion about the lab leak theory, presumably to avoid oversight of risky research his group funded at the WIV, Daszak’s refusal to cooperate with the scientific community and his unwillingness to share information relevant to the origins of the COVID-19 pandemic, and Daszak’s repeated inaccurate statements about his group’s work at the WIV and numerous official representations to NIH that are contradicted by documentation.”

In a “public health relevance” statement on the new project, EcoHealth states that “most pandemics are caused by animal-origin viruses that emerge in regions where people have high contact with wildlife and where illnesses or outbreaks may be missed.

The research, according to the description, will “provide detailed information on the risk of future CoV spillover and spread” and will help in the development of new vaccines.

They may also provide data 25 on wildlife reservoirs and community spillover events of relevance to the origin of COVID-19. Finally, we will 26 rapidly supply viral sequences and isolates for use in vaccine and therapeutic development, including 27 “prototype pathogen” vaccines, via an existing MOU with the NIAID-CREID network. Our long-term goal is that 28 this work will act as a model to build pandemic preparedness strategies to better predict sites and communities 29 where wildlife-origin viruses are likely to emerge, and to disrupt emergence in EID hotspots around the world.

The long-term goal of the project is to help aid global preparedness in case of another global pandemic, the NIH said.

EcoHealth Alliance’s animal experiments should be de-funded, not re-funded. As we first exposed, this shady group funneled US tax dollars to the Wuhan Institute of Virology for dangerous animal experiments that likely caused the pandemic, skirted a federal ban on gain-of-function research, repeatedly violated transparency law and obstructed investigations into COVID’s origins. Yet, records show that EHA has continued to receive millions of taxpayer dollars just since the pandemic began. Taxpayers should not be forced to fund this reckless rogue lab contractor any longer. Stop the money, stop the madness.

The White Coat Waste Project is a 501(c)(3) organization that seeks to end taxpayer-funded experiments on dogs, monkeys, cats and other animals.