Nearly 30 years ago, Richard Herrnstein and Charles Murray published “The Bell Curve,” which became notorious for its chapter that highlighted differences in IQ test results by race. But that controversy overshadowed the primary focus of the book, which was that the human race is dividing into a cognitive elite and everyone else.

In the book, the authors argue that for the first time in history, humans are far more likely to marry their intellectual equals. “As the century progressed,” they write, “the historical mix of intellectual abilities at all levels of American society thinned as intelligence rose to the top. The upper end of the cognitive ability distribution has been increasingly channeled into higher education, especially the top colleges and professional schools, thence into high-IQ occupations and senior managerial positions. The scattered brightest of the early twentieth century have congregated, forming a new class.”

Herrnstein and Murray went on to predict an alliance between the cognitive elite and the affluent, writing, “For most of the century, intellectuals and the affluent have been antagonists,” but that now, “the very bright have become much more uniformly affluent than they used to be while, at the same time, the universe of affluent people has become more densely populated by the very bright. Not surprisingly, the interests of affluence and the cognitive elite have begun to blend.”

Although parts of The Bell Curve have been hotly debated, these two predictions—the formation of a cognitive elite, and the alliance of the cognitive elite with the affluent—resonate strongly today. They explain one of the root causes of globalism. Herrnstein and Murray even predict the rise of “the custodial state,” which they define as “a high-tech and more lavish version of the Indian reservation for some substantial minority of the nation’s population, while the rest of America goes about its business.”

The problem with that prediction, however, is that it suggests America will divide into three classes: the cognitive elite and affluent class, the middle class, and a permanent underclass of the cognitively deficient, completely dependent on the “custodial state.” That would have been bad enough, but that’s not quite what is happening. Instead, the elites in America, joining with their counterparts in most of the rest of the developed world, are engineering a future where there will only be two classes: the elites and a permanent underclass.

Not everyone who is highly intelligent or independently wealthy embraces the extreme climate and equity agenda. Many still see that such a flawed agenda is bound to impoverish and embitter billions of people. While there are powerful incentives to go along, and powerful disincentives to resistance, minds can be changed. The prevailing consensus can be broken.

To avoid turning the vast majority of humanity into livestock, which is where we’re headed, requires presenting alternative scenarios. Appealing to those elites who retain a shred of common sense and common decency is not impossible. Protecting the planet and promoting fairness does not require rationing and racism. Elaborating on those basic facts may yet convince a critical mass of elites to change the course we’re on.

Meanwhile, to try to fully understand the reason America’s elites are distancing themselves from everyone else, and engineering the destruction of the middle class, another curve has explanatory value: the curve of population growth in the world.

After a few millennia of slow growth, the human population began to skyrocket. Rising from 190 million in the year zero to nearly 1 billion by 1800, by 1928 it had doubled to 2 billion, hit 3 billion by 1960, and then added another billion every 15 years. World population now stands poised to break 8 billion within the next year or two. 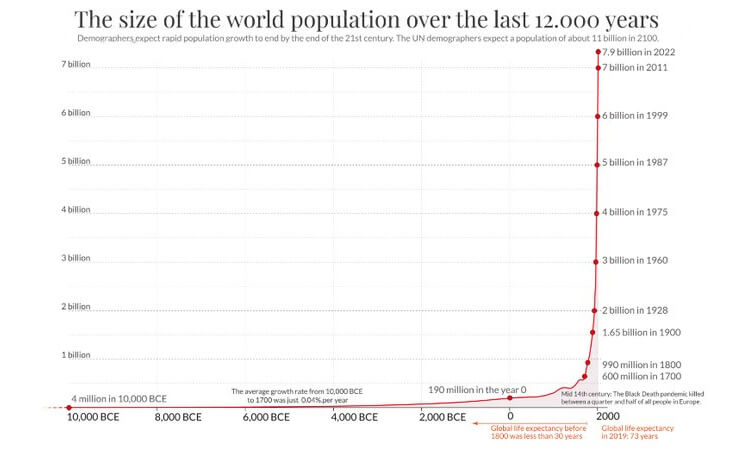 You don’t have to be a member of the cognitive elite to see the human population cannot continue to double every 40 years indefinitely. And it won’t. Several possible causes have been identified to explain the relatively recent and steady reduction of birthrates around the world, but the decline is indisputable. Humanity most likely will reach its peak population within a few decades, if not sooner, after which the total human population will be aging and shrinking. How fast it will shrink, and what that will look like, though, brings us back to the role of the elites.

Herrnstein and Murray in their predictions and prescriptions for Americans coping with the rise of a financial and cognitive elite didn’t take into account global population demographics. They also didn’t anticipate the rise of the green movement as a moral pretext for the destruction of the middle class.

The elitist argument for destroying the middle class is simple. If everyone on earth used as much energy as Americans use, global energy production would have to more than quadruple. That fact roughly applies to all natural resources. We might argue—and we should argue—that innovation can deliver a middle-class lifestyle to 8 billion people without catastrophically depleting critical natural resources or causing unacceptable harm to the earth’s biosphere, but apparently that’s not a choice the elites want to make. And they don’t have to.

Explaining this refers to another development, the full impact of which Herrnstein and Murray couldn’t have seen coming, which is how artificial intelligence and other technological innovations will make the existence of a middle class unnecessary.

In their book, Herrnstein and Murray ask, “what is the minimum level of cognitive resources necessary to sustain a community at any given level of social and economic complexity?” By implication, they suggest that if the average IQ of a population is low or in decline, that jeopardizes the potential of the population to advance or even maintain their standard of living. But the consensus among today’s elites is that broadly distributed intelligence in a population is no longer necessary.

The logic for this is sound, even though it dismisses the aspirations of billions of people. People in jobs of moderate responsibility, or less, won’t need to know as much or think as much as they once did. Even doctors and airline pilots will rely increasingly on algorithms to make their diagnoses and fly their planes. If the plane crashes, as we saw a few years ago with two grisly 737 incidents, that is an inevitable byproduct of working out the bugs in the software. If a cyber attack systematically crashes the entire civilization, the elites will be in their bunkers, sandboxed away from the ensuing mayhem.

What is coming is a ruthless meritocracy that will admit only those individuals with the skills to do work that can’t be replaced by algorithms and robots. There won’t be many openings. In most professions and trades, to the extent human involvement is still necessary, competence will be secondary to affirmative action because automated procedures and artificial intelligence prompts will tell workers what to do.

By blending and flattening the population of the world’s cognitively normal, the cognitive elite will be able to pacify and manage them, distance themselves, and have exclusive access to whatever property and privileges they consider not sustainable or desirable for everyone to enjoy.

For example, even if it becomes possible to deliver a middle-class lifestyle to the entire global population of aging billions, the elites may ask, “Is it desirable?” And if it becomes possible to deliver life extension therapies inexpensively with nothing more than a gene modifying injection, the elites may also ask, “Is it desirable?” Why should elites care about any of this if an underclass of machines that do not require these things can do all the work for far less bother than an underclass of humans?

Meanwhile, the ongoing expansion of the custodial state is concurrent with the average IQ of Americans shifting into decline. This shouldn’t be surprising. The so-called Flynn Effect, the theory that social and economic progress caused IQ scores to rise in the early 20th century, has now been thrown into reverse. Many factors could explain this reversal, but because it is happening universally, we might start by implicating a degraded system of public education, a dumbed-down media, the diversions of mindless, endless online rubbish, the collapse of meritocracy, and the replacement of the pursuit of excellence with the quest to acquire status and rewards by defining oneself as a victim.

The controversy over one chapter in Herrnstein and Murray’s book should not diminish the fact that, way back in 1994, their work anticipated two of the most decisive trends in the world today: The emergence of a cognitive elite, and, for the first time in history, the almost total convergence of intellectuals with the financial elite. The consequence, an apparent consensus among the two groups to destroy the middle class to protect their own interests while claiming they’re saving the planet and promoting “equity,” should surprise nobody.

It’s the easy path. But it’s the wrong path.