A new Trafalgar Group poll has found that most American voters—56.8 percent—strongly disapproved of Joe Biden’s unhinged attack on Trump supporters during a primetime address last week, saying it was “a dangerous escalation in rhetoric and is designed to incite conflict amongst Americans.”

The nationwide survey of 1084 general election voters was conducted from Sept. 2 to Sept. 5 in partnership with Convention of States Action. 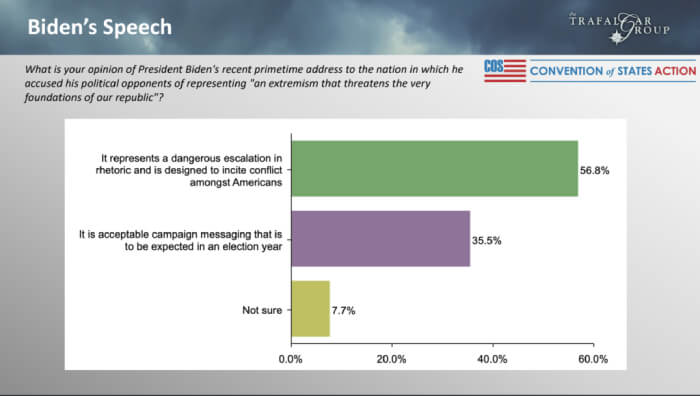 During his speech at Philadelphia‘s Independence National Historical Park on Sept. 1, Biden demonized Trump supporters, calling them “MAGA forces” who represent “an extremism that threatens the very foundations of our republic.”

When asked about this, 35.5 percent of American voters said Biden’s incendiary rhetoric was “acceptable campaign messaging that is to be expected in an election year.” The rest of the respondents—7.7 percent—said they were not sure.

Overwhelmingly however, Republican voters (89.1 percent) and Independent voters (62.4 percent) found the speech to be “dangerous” and “designed to incite conflict amongst Americans.”

Only 31.2 percent of Independent voters and 4.7 percent of Republican voters said they believed Biden’s speech was “acceptable campaign messaging.”

Among Democrats, 70.8 percent said they believed Biden’s speech accusing his political opponents of representing “an extremism that threatens the very foundations of our republic” was “acceptable campaign messaging.”

Another 18.7 percent of Democrat voters said they believed Biden’s outrageous speech was a “dangerous escalation in rhetoric and is designed to incite conflict,” and 10.4 percent of Dems were not sure.

“These numbers reveal that most voters were sickened and deeply disturbed by what they saw last week. When you couple this finding with previous polling we did indicating a majority of voters also hold President Biden responsible for America’s divisions—it’s clear that the man who promised to unite the nation has become the most divisive President in American history,” said Mark Meckler, President of the Convention of States.

“When voters tell you they think that the prepared remarks of a sitting President of the United States is a dangerous escalation and was designed to incite conflict, we are living in terrifying times. Perhaps even more terrifying is the fact that a huge majority of Democrats think this was just a routine, election year stump speech,” Meckler added.

“This is the tyranny the founders of America foresaw, and it’s why they included an emergency provision in Article V of the U.S. Constitution empowering the states to reign in an out-of-control federal government. A Convention of States needs to happen…and urgently,” Meckler concluded.

Homeland Security and Counterterrorism expert Kyler Shideler noted on Twitter that the poll showed a “majority of independents and even sizable number of democrats” rejected Biden’s divisive Philly speech. “So who was the audience?”

Shideler suggested an answer to that question by linking to his recent piece in American Greatness titled, Joe Biden’s Antifa Politics.

“This of course is notable because Biden’s speech was explicitly majoritarian, labeling opponents as a minority and extremist,” Shideler added in a subsequent tweet. “But what if THEY are the minority…?”

Less than a day after his Hitleresque diatribe, Biden attempted to walk his harsh rhetoric back, telling reporters that he doesn’t consider “any Trump supporter a threat to the country”—just the ones who  “attacked the Capitol” on January 6th, and those who don’t accept the results of the rigged 2020 election—which is about 70 percent of Republicans.