Trying to accurately track COVID deaths in the United States over the past 30 months has been a fool’s errand. Even if you dismiss claims that hospitals had financial incentives to overreport COVID deaths, you still would need to navigate the subjective territory of comorbidities and where the line is drawn between a death truly attributable to a COVID infection versus a death that would have happened anyway from some other terminal cause.

Skeptics abound thanks to these ambiguities, leavened by an assortment of institutions, including the media, the government, and the medical community that have lost almost all their credibility with untold millions of Americans.

Just how bad was COVID? How bad is it today? Some people still think the entire epidemic was a hoax.

Through the fog of data, so it goes, deaths from pneumonia and the flu fell during the COVID era, classified instead as COVID deaths. According to the hoax theory, the actual danger posed by COVID was greatly overstated, because deaths caused by COVID were overstated. But there is one thing that cannot be as easily obscured via errors in classification, and that is total deaths from all causes.

Referred to by statisticians and epidemiologists as “excess deaths,” this is a far less controversial data point. After all, it has an unambiguous essence: you are dead, or you are not dead. What may ail you or how you died is irrelevant. Since the COVID era began in 2020, using weekly reports issued by the CDC, I’ve been tracking total deaths in the United States. Using these same CDC reports, which go back to 2013, I’ve been comparing total deaths over the past 2.5 years to the averages based on the six years preceding 2020. The chart below clearly shows that something terrible has been happening and that it may not be over. 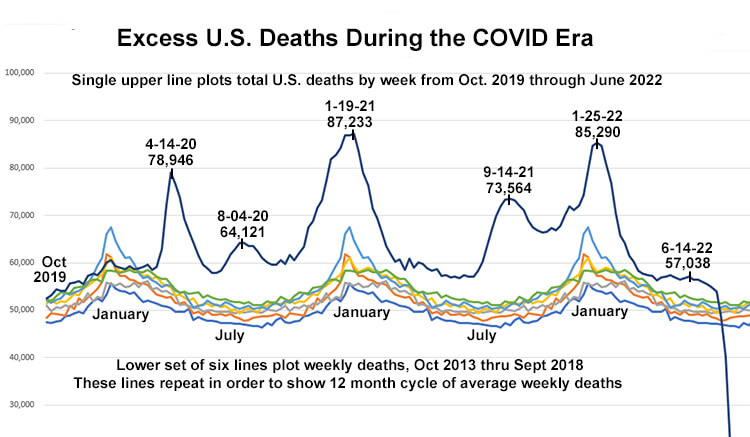 The purpose of this report is not to speculate about the role COVID played in these excess deaths from the past two years, nor to speculate as to the causes of the COVID pandemic, its timing, its impact, or the response. Instead, this report will rely on one assumption, which some readers may believe to be a stretch, but which I believe is reasonable: The CDC is not cooking the data when it comes to deaths from all causes. That is to say, everything presented here relies on the CDC accurately reporting how many people die each week in the United States.

If you accept that assumption, the data is unsettling. On the chart, six tightly bunched lines show deaths by week in the most recent six pre-COVID years. They are plotted according to how the CDC tracks flu seasons, i.e., from October 1 through September 31. These lines repeat in order to show the 12-month cycle of average weekly deaths. Hence the lines all rise upwards to reflect higher than average deaths during peak flu season in January and descend to low points in July when cases of the flu are far less prevalent.

Until COVID came along.

On the chart, the single line that soars well above the other rows of data does not repeat in 12-month illustrative cycles, but rather is a linear plot of deaths by week in the United States from October 2019 through the middle of June 2022. Because the CDC requires at least eight weeks to collect and compile data from all causes, it is not possible to provide an accurate count for any weeks more recent than mid-June of this year. That’s why the line falls off precipitously after mid-June. As data comes in, the true numbers will be known for more recent weeks.

Viewing this chart makes it quite obvious that total deaths from all causes have been well above the typical average ever since COVID began. The first peak in April 2020 was one of the worst. During the week of April 14, 2020, 78,946 Americans died, when a normal tally that time of year should have been only around 53,000. Then there was the surge in the summer of 2020, culminating in a peak of 64,121 on the week of August 4, 2020, when at that time in a normal year deaths would have come in at around 50,000. But when it comes to excess deaths in America, 2020 was just the beginning.

If you compare how many people died in America during the COVID era to how many people would normally have died based on six years of prior year CDC data on deaths from all causes, the excess deaths are 25 percent over normal. Twenty five percent. With the sole exception of the Spanish Flu pandemic a century ago, there has never been a die-off in the United States on this scale.

Is it over? From the chart, we see the decline in total deaths this spring looks remarkably similar to the decline in the spring of 2021. The last data point on which we can rely, in mid-June, is actually tipping slightly upward from the previous week’s total.

By any standard, what has happened has been catastrophic for this country. We may never know how many of these excess deaths were from COVID, from deferred treatment for other ailments, from elevated numbers of people committing suicide, or from adverse reactions to the vaccines. But one thing must be understood unequivocally, and it ought to go without saying: This has been a tragedy on an epic scale and one from which we can only hope we have learned a great deal.

For starters, and while avoiding a socialist overreaction, we may begin keeping a closer eye on the pharmaceutical industry. The accomplishments of this industry must be acknowledged. Precision medicine is coming, and the days of many dread diseases are numbered. But that day will come sooner if Americans can root out the corruption in this industry, as well as in its supposed overseers.

It is important to recognize that not all players in the pharmaceutical industry are guilty of corruption, but some of the biggest have a sordid record indeed. They have hooked half the nation on anti-anxiety medications, they’ve pushed medication onto millions of children, they’ve pushed opiates out to masses of people, they’ve arguably oversold vaccines of all kinds, and they exercised far too much influence over the COVID response—including the shameful suppression of any experimental treatments or therapies they couldn’t control. Now some of them are pushing “gender confirmation” drugs, which transsexuals have to take for the rest of their lives. If that’s not enough, as we learned over the past few years, American pharmaceutical manufacturers have offshored production of many of our most essential drugs to China.

Meanwhile, it’s necessary to continue to investigate what has caused millions of excess deaths. But what is indisputable is this: In just over two years, over 1.5 million people are dead in America who in normal times would have been alive today. Even now, based on the most recent data available, deaths from all causes in America are still not quite 15 percent above normal.

A mass die-off is still happening in America and reportedly around the world as well, and we have no idea what’s coming next.