In the latest attack on a pro-life organization, pro-abortion extremists spray-painted threatening messages and anarchist symbols outside a pro-life pregnancy center in Massachusetts late Wednesday or early Thursday, according to police.  Since last May, when a draft ruling was leaked indicating that the U.S. Supreme Court was going to overturn Roe v. Wade,  there have been about 94 attacks on pro-life facilities and churches.

Bethlehem House Inc. Pregnancy Care Center in Easthampton, 99 miles west of Boston, was targeted by pro-abort vandals, who splattered red paint across the white exterior of the facility. One message sprayed painted in black on the ground outside the center read: “If abortions aren’t safe, neither are you!”

BREAKING: Vandals attacked another pro-life center in Massachusetts. They left behind the message: “If abortions aren’t safe, neither are you!” (PC: Shelly Fournier) pic.twitter.com/Q5BTehqpcE

Bethlehem House, is “a nonprofit, faith-based organization that provides confidential services to pregnant women and men in need,” according to the pregnancy center’s website.

Jane’s Revenge has taken credit for vandalizing or firebombing over a dozen churches and pregnancy centers since the SCOTUS leak, including CompassCare, a pro-life medical office and pregnancy center in Buffalo, New York; Oregon Right to Life in Keizer, Oregon; Clearway Clinic in Worcester, Mass., and Wisconsin Family Action in in Madison, Wisconsin.

In a statement last May, the pro-abort terrorist group vowed to use “increasingly extreme tactics to maintain freedom over our own bodies.”

Their targets have included crisis pregnancy centers and churches.

The hate group, which the Atlantic recently dismissed as “the Right’s New Bogeyman,” has emphasized in its statements: “We are not one group, but many.”

The Easthampton Police Department told The Daily Signal that the incident is the subject of an “ongoing investigation.”

The pro-life pregnancy center in Easthampton does “amazing things,” an Easthampton resident who lives within two blocks of Bethlehem House, told The Daily Signal.

“I don’t know what kind of person would try to target somebody that’s helping newborn mothers with needs,” the local woman said. “I’m a mother myself, and I just can’t believe anybody would do that to them.”
In the clinic in Worcester, 47 miles from Boston, security cameras showed two extremists using a hammer to break the pro-life pregnancy center’s doors and windows. One of them spray-painted the words “Jane’s Revenge” on the ground outside the front doors.

“The vandalism must be publicly condemned by our state legislators,” Michael King, director of community alliances for Massachusetts Family Institute, told The Daily Signal, adding: “We haven’t heard anything from state legislators on this issue.”

U.S. Sen. Elizabeth Warren (D-Mass.) told reporters on July 12 that pro-life pregnancy centers should be shut down across America.

Warren is “culpable, she’s responsible,” King told The Daily Signal that Warren is “culpable” and “responsible” for the attacks. “Her words have encouraged … domestic terrorist groups like Jane’s Revenge to feel justified in their intolerant and dangerous actions,” he said.

FBI Director Christopher Wray told the Senate Judiciary Committee on August 4 that the bureau has opened a number of investigations into abortion-related crimes, including alleged pro-life violence.

In his testimony, Mr Wray relayed that there has been a significant surge in criminal activity both from opponents and supporters of abortion rights since a draft of the Supreme Court decision overturning Roe v Wade and ending the national right to abortion care was leaked to Politico in May.

There have been zero arrests of Jane’s Revenge extremists since their terror campaign against pro-life facilities began.

But there has been an attempt in the media to portray pro-life Catholics as dangerous extremists.

The Atlantic changed headlines multiple times in response to massive backlash over an op-ed that compared the Catholic rosary to an “assault weapon.”

Authored by Daniel Panneton, the article, originally titled, “How the Rosary Became an Extremist Symbol,” featured a rosary that had bullet holes in place of beads and argued that the Catholic sacramental had become a tool of violent militants.

The Atlantic is having convulsions over here with how fast they keep changing the headline of their bigoted Rosary attack article. The latest edition also dropped the disgraceful 'bullethole rosary' graphic pic.twitter.com/rpCFFAUFmF 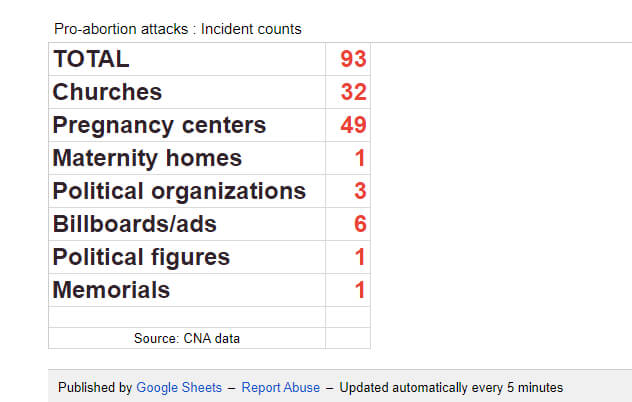