The conventional wisdom among America’s liberals, often seconded and rarely challenged by conservatives, is that population growth in the United States should be channeled as much as possible into the footprint of existing cities. Surrounding cities should be “greenbelts,” suburban growth should be rejected as unsustainable “sprawl,” and human settlement in areas defined as the “urban-wildland interface” should be discouraged and, where possible, reversed.

The movement to increase the population density of cities and reduce rural populations is already enshrined in California law and is rolling quietly across the rest of the nation. It is marketed as enlightened, environmentally sustainable urban planning, but the moral pretext obscures a self-serving density agenda that is shared by several powerful special interests.

Among all the misanthropic trends in public policy that threaten the freedom and prosperity of ordinary Americans, the density agenda is probably the least discussed.

Stated simply, population densification will fundamentally undermine Americans’ ability to preserve their freedom and independence. You don’t have to reference Agenda 2030—about which it is now almost impossible to find any negative commentary online—to understand how easily a population can be controlled when it is relocated and concentrated into a handful of megacities.

In the 1990s, shortly before the end of apartheid, I remember speaking with someone who had just returned from a tour of South Africa. He commented on his impressions of the densely populated black townships that were adjacent to every major city.

“They’ve got them all bottled up tight as sardines in a can,” he said, “nice and neat, so whenever they want, they can zap them all.”

Here is an aerial photo of neighborhoods in Soweto, just outside Johannesburg. It was perhaps the most infamous township of the apartheid era. 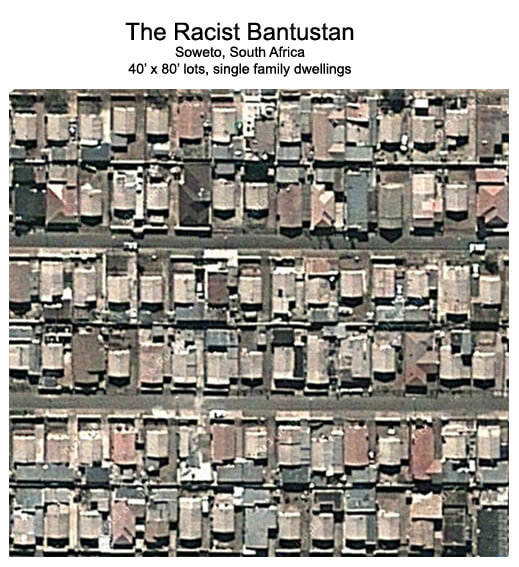 This image, which corresponds to a population density exceeding 20,000 people per square mile, reveals how blacks in Soweto were pushed into packed neighborhoods where they could easily be contained in the event of mass civil unrest.

In America, even this population density is frowned upon by enlightened environmentalists. After all, those people lived in “single-family dwellings,” which are themselves “exclusionary” and “unsustainable.” In California, and against the odds, politically connected developers can still build limited numbers of single-family dwellings because free-standing individual homes are the overwhelming choice of families, if they can afford them.

Featured below is an aerial photo of such a development in Sacramento, California’s state capital and one of the citadels of green extremism. Note the lot size. These 40-by-80-foot lots are precisely the same size as those in Soweto. 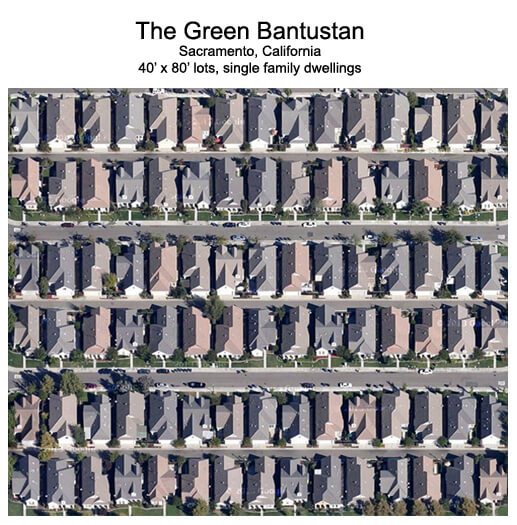 How those neighboorhoods are evaluated by mainstream commentators bespeaks a blithe hypocrisy. In Soweto, such neighborhoods were variously described as concentration camps where people were confined and subjected to inhumane crowding. In Sacramento, these neighborhoods are under attack as environmentally incorrect “sprawl,” as laws and zoning increasingly favor multifamily dwellings.

Economics, not any particular concern for the planet, drives the density agenda. Chief among these economic imperatives is to render housing barely affordable. Reducing the supply of housing while increasing the U.S. population through loose immigration policies creates shortages, which then drive up prices.

Perpetually inflating the value of real estate, in turn, creates new asset collateral. This helps balance the U.S. trade deficit, as foreign investors repatriate dollars by buying expensive American real estate. It also enables the ongoing U.S. trade deficit, as homeowners are seduced into borrowing against their home equity to purchase imported consumer products. The macroeconomic scheme that lets Americans print as much currency as they want and monetize the world with dollars purchasing foreign goods is sustained, in large part, by keeping the value of U.S. real estate artificially high.

That isn’t the only reason to cram people into the footprint of existing cities and jack up the cost of all housing through engineered shortages. The interests of public-sector unions and public utilities are another powerful driver obscured by density policies.

Public-sector unions always benefit when public infrastructure spending is restricted due to environmental concerns. Instead of investing public funds to build and upgrade reservoirs, aqueducts, and freeways, public agencies can allocate more of their budgets to increasing the pay and benefits for government workers. Local public-sector fiefdoms also benefit when the population is increased in existing jurisdictions. In the past, the integrity of existing suburbs would not be violated, and instead, new cities outside established jurisdictions would gain those new residents and collect the new tax revenue.

Public utilities have a powerful financial incentive to embrace the density agenda and its intimate sibling, the renewables agenda. When people are forced to ration energy and water as more people are crammed into existing neighborhoods, the same utility grids—water, power, and wastewater—can be employed without costly expansion. Never mind that residents will now be restricted to 40 gallons of indoor water use per day, or pay to have expensive dual water meters installed so bureaucrats can impose and monitor an outdoor “water budget.” Never mind that renewable electricity flowing through smart meters will cost households 50 cents or more per kilowatt-hour during peak demand times, or that there will no longer be enough wastewater flowing through the sewer pipes to move the effluent.

Public utilities will deliver less of everything but charge much more. Their revenue will go up even as their deliveries go down. And since their earnings are restricted to a regulated percentage of total revenue, they will make more profit than ever.

Planned Obsolescence Is the New Normal

The density agenda is the product of intersecting benefits that attract a powerful coalition of special interests. In almost every sector of the economy, monopolistic corporate special interests have navigated a profitable path that furthers the shared agenda.

When environmentalist-inspired regulations make it almost impossible to get building permits, public entities collect higher fees, and favored developers build homes they can sell for more money and more profit. When environmentalists litigate to stop the construction of a new reservoir, public agencies retain the funds for more internally remunerative uses, and the possibility of new home construction is diminished. Without access to water, new homes cannot get built. When homes are too expensive for most families to afford, institutional investors roll in and buy whole subdivisions and rent them all, depriving Americans of what throughout our history was the most reliable way to build generational wealth.

It is crucial to understand the collaborative role of the high-tech industry in all this. Property management by institutional investors, along with the operation of modern appliances by individual homeowners, will be facilitated by appliances connected to the internet and algorithmically monitored.

Tech firms will secure perpetual and lucrative new revenue streams supplying hardware components for this entire surveillance panopticon, along with collecting fees for mandatory and frequent software updates. Remember the bored Maytag repair man? Those days are done. Technological “upgrades” to enable ultra-efficient appliances mean you’ll replace your refrigerator, washer, dryer, dishwasher, hot water heater, and every other durable good as often as you replace your smartphone. Planned obsolescence, masquerading as green and empowering, is the new normal.

Rationing in all its forms—and seldom ever called by that name—rewards the entrenched elite and harms everyone else.

One of them recognizes the importance of building enabling infrastructure so small investors and individual families can afford to live however they wish. Some will prefer the amenities of a densely populated urban core, and others will prefer the ambiance of spacious suburbs. But the notion that Americans are running out of room or resources to build new suburbs is as delusional as the idea that only a “smart” appliance can achieve acceptable levels of efficiency and sustainability. All too often, these are merely opportunistic lies endlessly parroted by journalists who have never examined the facts.

The prevailing vision of environmentalism today, unfortunately, caters to a global oligarchy. They have decided it is in their interests, along with the interests of the planet—most definitely in that order—to preach imminent doom. Stack and pack, do it for the earth, and laugh all the way to the bank.