Special counsel John Durham on Tuesday asked a federal court to issue 30 subpoenas for testimony in the trial against Igor Danchenko, the primary source of the discredited Steele dossier.

The court filing asked the U.S. District Court for the Eastern District of Virginia to issue the subpoenas for an “appearance before said Court at Alexandria, Virginia,” starting on Oct. 11 “to testify on behalf of the United States.” 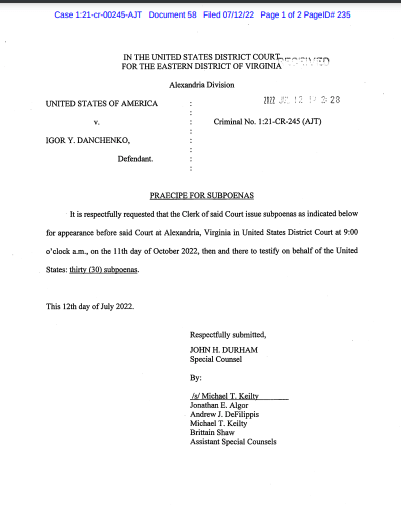 Danchenko, a former Brookings Institution analyst, was charged in November of 2021 with five counts of making false statements to the FBI, including lying to investigators about Trump supporter Sergei Millian.

Some of the most explosive allegations in British ex-spy Christopher Steele’s dossier—including the so-called “pee tape”—were fraudulently sourced to Millian, a Belarusian-American businessman.

A review of Danchenko’s phone records and other evidence found that Millian never spread those rumors to Danchenko. The Clinton subcontractor reportedly made it all up.

Steele was hired by an Fusion GPS, an opposition research firm, on behalf of Perkins Coie, the law firm for Hillary Clinton’s campaign in 2016.  Justice Department Inspector General Michael Horowitz concluded in December 2019 that the dossier played a “central and essential” role in the FISA Court’s approval of the FBI’s secret surveillance of former Trump campaign aide Carter Page.

Millian was falsely described in the “dodgy dossier” as a “close associate” of Trump.

According to Durham’s indictment, the FBI interviews with Danchenko “raised significant questions about the reliability of the Steele election reporting” and concluded Danchenko “contradicted the allegations of a ‘well-developed conspiracy’ in” Steele’s dossier.

He has pleaded not guilty, and his trial is set for October. He is being represented by defense lawyers from Schertler & Onorato, another law firm that worked for Clinton’s campaign, despite warnings that it could be a conflict of interest.

Steele source Igor Danchenko is now represented by lawyers who worked for the Hillary Campaign.

Special Counsel John Durham is asking the court if that's an improper conflict.

Notable: trial inquiry may include whether the Clinton Campaign directed Danchenko's activities. pic.twitter.com/vczgWX5ih0

In a legal filing in January, Danchenko said he was aware of the potential conflict of interest but decided not to switch lawyers.

“I believe I have a full understanding of any actual or potential conflicts of interest that might arise during the course of my representation,” Mr. Danchenko wrote in a filing with the U.S. District Court for the Eastern District of Virginia. “With that knowledge and understanding, I voluntarily waive any actual or potential conflicts of interest and choose to continue with my current counsel of choice.”

The judge in the case is U.S. District Judge Anthony Trenga, who was nominated by former President George W. Bush in 2008. Trenga has been on the Foreign Intelligence Surveillance Court since 2020.

Democratic cybersecurity lawyer Michael Sussmann had been charged in September by Durham after reportedly concealing his two clients, Neustar chief technology officer Rodney Joffe and Hillary Clinton’s 2016 campaign, from FBI General Counsel James Baker when he pushed debunked allegations of a secret line of communication between the Trump Organization and Russia’s Alfa-Bank during a September 2016 meeting. But a jury found him not guilty in late May.

Danchenko allegedly relied upon a network of Russian contacts but undermined key collusion claims when interviewed by the FBI. According to Durham’s false statements charges, he anonymously sourced a fabricated claim about Trump campaign manager Paul Manafort to longtime Hillary Clinton ally Chuck Dolan, who spent many years doing work for Russian businesses and the Russian government, including in 2016.

Thus far, Durham has only succeeded in getting one guilty plea—from former FBI lawyer Kevin Clinesmith—who admitted to doctoring an email for one of the Bureau’s FISA warrant applications to spy on Page.

Clinesmith was ordered to work 400 hours of community service and 12 months probation, which ended at the end of 2021. After a one-year suspension of his license, the D.C. Bar in September of 2021 reinstated his license to practice law in Washington, D.C.

He served no jail time.