The elder Biden appeared to be pleased with the Grey Lady’s whitewash of what should have been a massive scandal. “I thought the article released online—it’s going to be printed tomorrow in the Times—was good,” he said in a voicemail obtained by the Daily Mail. Biden told his scandal-plagued son: “I think you’re clear.”

Despite overwhelming evidence to the contrary, Joe Biden has repeatedly denied ever being involved in discussions regarding Hunter’s shady foreign business dealings.

The Times had framed the story as being about a Chinese tycoon who sought power and influence in the United States by ensnaring unwitting Americans.

“By 2015, Mr. Ye had begun working on perhaps his most politically connected quarry yet: the family of Mr. Biden, the vice president,” The paper reported.

An aide to Mr. Ye met the vice president’s second son, Hunter Biden, in Washington. Mr. Ye then met privately with Hunter Biden at a hotel in Miami in May 2017, according to people with direct knowledge of the meetings who were not authorized to speak publicly because the meetings were private. Mr. Ye proposed a partnership to invest in American infrastructure and energy deals, the people said.

It is unclear whether Hunter Biden struck any business deals with CEFC or Mr. Ye. Through his attorney, Hunter Biden declined to comment.

Over the course of 14-months CEFC reportedly paid $4.8 million “to entities controlled by Hunter Biden and his uncle.”

Tony Bobulinski, a former business partner of Hunter Biden, came forward in October of 2020 to blow the whistle on the Biden Family’s multi-million dollar business deal with CEFC.

In a blockbuster statement, Bobulinski, a former Lieutenant in the U.S. Navy and CEO of SinoHawk Holdings, said Hunter Biden frequently asked his dad to sign off on his influence peddling operations.

“The Biden family aggressively leveraged the Biden family name to make millions of dollars from foreign entities even though some were from communist controlled China,” he wrote.

During a press conference in Nashville, Tennessee, the whistleblower revealed that he’d had an hour-long meeting with the former Vice President in May of 2017 to discuss a joint venture between the Bidens and CEFC.

Ho was arrested in New York in 2017 for his role in an international, multimillion-dollar bribery and money-laundering scheme that involved bribes to officials in Uganda and in Chad in exchange for business advantages for CEFC.

Joe Biden called his son on December 12, 2018 saying that he wanted to talk to him after reading the New York Times story about Hunter’s business dealings with CEFC.

The Times’ 2018 story pointed out CEFC’s chairman Ye Jianming had been arrested in China and his top lieutenant Patrick Ho had been convicted in the US for bribing African officials to help Iran evade oil sanctions.

It revealed that Ye had met with Hunter at a Miami hotel in 2017 to discuss ‘a partnership to invest in American infrastructure and energy deals.’

The Times reported that when Ho was arrested, he called Joe’s brother Jim Biden – who told the newspaper that he believed the call was meant for Hunter.

The Gray Lady said it was ‘unclear whether Hunter Biden struck any business deals with CEFC’, not knowing at the time the depths of his connections with his Chinese business partners.

After seeing the story online, an apparently relieved Joe Biden called his son and left a voicemail.

“I thought the article released online, it’s going to be printed tomorrow in the Times, was good. I think you’re clear. And anyway if you get a chance give me a call, I love you,” Biden added.

The  voicemail came from a backup of Hunter’s iPhone XS, which was stored on his abandoned laptop, the Daily Mail reported.

The recording contradicts Biden’s repeated denials that he ever discussed Hunter’s overseas business dealings with his son.

“The president has said that he never spoke with his son about his overseas business dealings. Is that still the case?” Fox News correspondent Peter Doocy asked Psaki during a daily press briefing.

“Yes,” Psaki replied, affirming that Biden still stood by his 2019 claim that he’d “never spoken” with his son about “his overseas business dealings.”

After the Times’ story was published, Hunter’s business partner teased him in a text about James Biden’s indiscreet comment to the newspaper  linking Hunter to Patrick Ho.

Devon Archer, Hunter’s longtime best friend and business partner who is now serving a year in jail for defrauding a Native American tribe, wrote to him the next day: ‘Nice quote from uncle jimmy. I hope you thanked him for that.’

‘Took it totally out of the context atctually (sic) the text itself that it was said in,’ Hunter replied. ‘Either way yeah I’m delighted.’

It turned out Jim was telling the truth. After Ho was arrested, he contacted Hunter and paid the president’s son a $1million retainer to represent him as his attorney.

A copy of a FISA warrant obtained by DailyMail.com reveals that federal agents were monitoring Ho as a potential spy for China.

And while holed up in a hotel room on a bender with a prostitute filming amateur sex tapes, Hunter accidentally recorded himself referring to Ho as the ‘spy chief of China’.

‘I have another New York Times reporter calling about my representation of the, literally, Dr. Patrick Ho — the f***ing spy chief of China who started the company that my partner [Jianming], who is worth $323 billion, founded and is now missing,’ Hunter told his female friend in the May 11, 2018 recording.

In recently uncovered texts to his psychiatrist, Keith Ablow in December of 2018, Hunter discussed his deep involvement with his father’s political team.

A month later, he was allegedly searching Google for good crack recipes, his iPhone data shows.

Joe Biden unwittingly (or wittingly) financed his son’s sordid escapades with a Russian prostitution ring by wiring him $100,000 from Dec. 2018 through Jan. 2019, while he was spending tens of thousands of dollars on Russian prostitutes.

In the video below, the younger Biden can be heard asking a very young prostitute if he had hurt her.

Keep these facts in mind as you watch this video of Hunter Biden accosting an escort tied to a Russian bank acct: 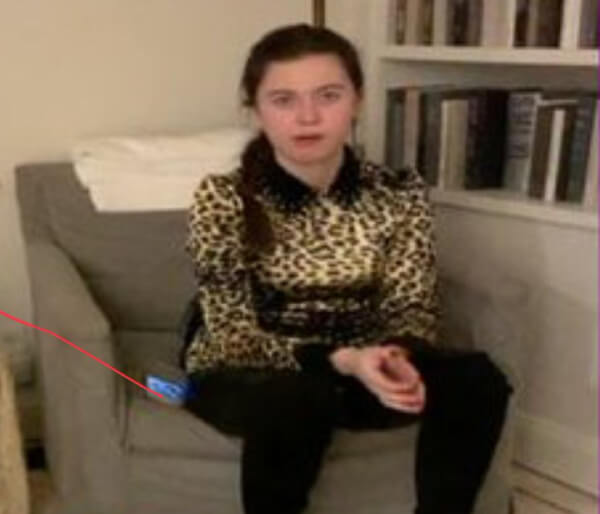