No sane observer of the recent actions of America’s military leadership class could conclude anything other than that the object is ritual humiliation of traditional America. They may not have been able to defeat the Taliban in 20 years and with $2 trillion at their disposal, but that hasn’t stopped them from declaring jihad on the self-respect and manly fighting spirit still latent in the troops under their command.

The examples of ideological browbeating are everywhere. With the advent of Pride Month, the high holy days of our regime’s reigning anti-fertility cult, the Marine Corps decided to celebrate by posting a photo of gay 5.56 rounds on Twitter:

Throughout June, the USMC takes #Pride in recognizing and honoring the contributions of our LGBTQ service members. We remain committed to fostering an environment free from discrimination, and defend the values of treating all equally, with dignity and respect.#PrideMonth #USMC pic.twitter.com/MOyvFmyJiB

Not to be upstaged by the Marine Corps’ homosexual homage to “Full Metal Jacket,” the Navy celebrated by integrating the Pride flag into the insignia in its profile photo on social media: 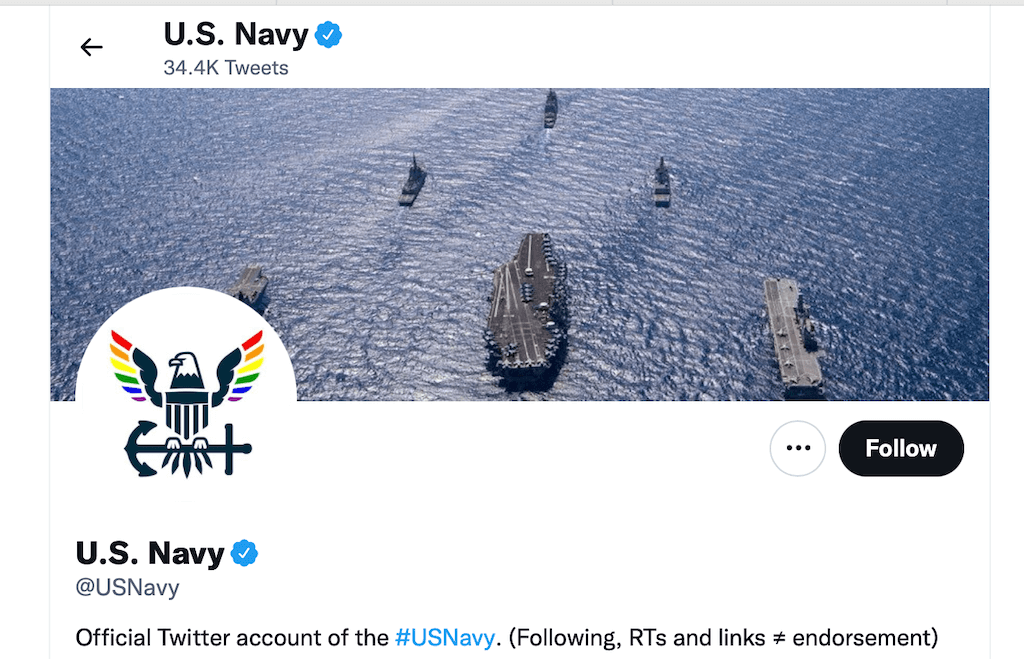 But all of these gestures pale in comparison to what happened on June 7. In a step that went well beyond mere virtue signaling, the Department of Defense reversed long-standing policy in order to allow HIV positive individuals to serve in the military.

Healthy service members who refuse to get the COVID vaccine will still get the boot, however.

This policy is an intentional slap in the face to the political enemies of the regime. More than half of all HIV positive cases in America continue to occur in gay men—who tend to be overwhelmingly liberal. Those who refuse the COVID vaccine for religious or political reasons are overwhelmingly conservative.

Helping friends and harming enemies: that’s what this boils down to. Our regime hates the straight white men it relies on to provide its globe-trotting firepower. That resentment needs an outlet: hence the Left’s love of ritual humiliation. They know that most of the good ole boys manning the front lines won’t push back. They will line up to be guinea pigs for the biomedical security state without a second thought. They will endure, without complaint, endless hours of sexual harassment training and diversity lectures that imply they are some mixture of rapist and racist.

America’s fighting men aren’t expected to win wars. They’re expected to toe the company line. Each year tens of thousands of young men sign up to defend freedom and the American way of life in a job that isn’t “just behind a desk.” They are promised a life of adventure and purpose. Instead, they are treated to ideological struggle sessions and harridan commissars pushing propaganda.

The modern woke military is no place for straight white men.

Too few of them realize it, however.

The American embassies flying the pride flag reveal the truth. The true allegiance of the modern state is not to the American people but to the liberal world order.

Traditional conservative brow furrowing won’t shock the system into awareness. It won’t save the mental, spiritual, and familial health of the young men who still cling to a patriotic longing to be “part of something greater than themselves.” Only a full-throated denunciation of the holy pieties of our decaying regime has any chance of reversing the nation’s troubled course and waking up those rich hearts longing to sacrifice themselves.

Burst into the temples of the Left and blaspheme their gods! Go to the high places and smash the idols! This is a winning strategy.

Let’s start with Pride Month. What is the LGBT “community” proud of, exactly? Engaging in certain sexual acts that have no connection to procreation? Or, in the case of the “T,” is it cutting off one’s genitals in the name of self-creation? And why, exactly, is the “world’s premier” fighting force interested in promoting such things?

It is absurd to demand that every identity and action be treated with “dignity” as the Marine Corps demands. Not all human actions are equally dignified, important, or life-affirming. This may be a painful truth for some in the leadership of our armed forces. Sorry, but no one promised you this affirmation.

A sexual union that can create new life is better and more worthy of honor than one that is intentionally sterile. A marriage that both creates children and raises them well is even higher. What LGBTQIAA+ activists really want when they demand “dignity” is for the state to compel others to affirm their feelings. Anyone who doesn’t celebrate their “love,” according to this childish logic, is thereby filled with “hate.”

The American military, by contrast, should be filled with serious adults. It should leave the war against nature to the activists and community organizers of the radical Left. Instead, our institutions are actively trying to join Antifa. Americans deserve better from their leaders.

Instead of virtue signaling online, the Navy should purge its ranks of corrupt officers who bilked the taxpayer for hundreds of millions of dollars. Instead of posting cringe Pride memes on Twitter, the Marine Corps should figure out why the MV-22 helicopter keeps crashing. There have been two such crashes in the last four months—one of which killed a member of the platoon I trained with at The Basic School.

The Department of Defense should drop its unnecessary and draconian COVID-19 vaccine mandate and should spend its mental energy trying to figure out why it can’t win wars.

None of this is likely to happen, however. Our political class, including Congress, is too far detached from reality. The burden, therefore, is on us. We need to demand accountability from our elected leaders and, if necessary, find new ones. But even more importantly—Americans need to stop sacrificing themselves for a state that hates them. We need to stop feeding our sons and daughters into the meatgrinder of the liberal world order. Then, and only then, we might see real change.