Last week a national media furor erupted after a Chicago-area news site reported 77 percent of black students in suburban Chicago’s Oak Park-River Forest High School District 200 “failed” the SAT, and that district was going to implement race-based grading. The district itself, mainstream media, and even “fact-checkers” pushed back, asserting the story was off-base.

But critics of the news item managed to miss the real story. The SAT results for District 200 are damning, and the district’s approach is to engineer “equity” rather than lift all boats through increased rigor and focus. Moreover, claims that the district’s approach will not be rooted in race are disproved by the district’s own director of equity. In a January video, he made clear that “racialization of assessments” will guide the district’s response to lagging mastery of core academic topics by black students.

SAT data in the Illinois Report Card show that for District 200 black 11th graders, only 23 percent tested could meet the state’s “performance level” standard of 540 or higher on the language portion of the SAT. Even more alarming, only 12 percent of District 200 black 11th graders taking the test met performance level on the math SAT. In both subjects, 11th grade SAT scores for whites, Hispanics, Asians, and all students were dramatically better than for black students.

Added to that, District 200’s board meeting materials make clear that administrators are headed toward adopting new “equitable assessment practices” which might allow students to not turn in homework, to get do-overs on tests, or even to take “alternative” tests that skate around their lack of core academic skills. That’s all buried within the educrat jargon of the slide show. The how is explained below. The big takeaway, however, is that District 200 wants an escape hatch from the academic failure of black students that’s so glaringly evident in their SAT reading and math results.

What’s To Be Done?

Let’s back up for a moment, in order to introduce the evidence. The main exhibit is the OPRF High School SAT results. To see results by race, click “Demographics” and check the boxes. What you’ll find: On the 2021 SAT reading test (known as English Language Arts, or ELA) 62 percent of all District 200 students met the state benchmark of a 540 score or higher. Only 23 percent of black students met or exceeded the state benchmark in ELA on the SAT, versus 50 percent of Hispanics, 73 percent of Asians, and 75 percent of whites.

Here are the 2021 OPRF 11th grade SAT results for ELA as shown in the Illinois Report Card. To get the total percentage of students meeting or exceeding the state-based “performance level” of 540 or higher, add the bright green and dark green bar subtotals together. 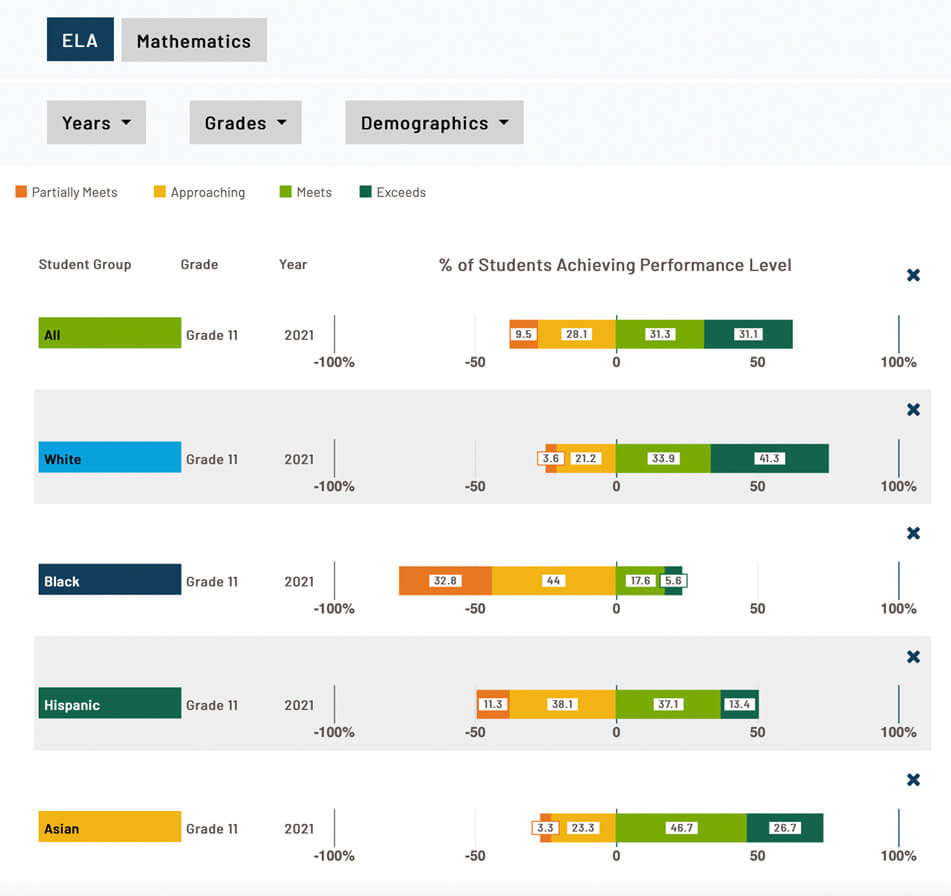 On the math section of the SAT, state report card data show that 52 percent of OPRF 11th graders met or exceeded the state benchmark standard versus a stunningly low 12 percent of blacks, 34 percent of Hispanics, 66 percent of whites and 70 percent of Asians.

Here are those math results, as shown in the Illinois Report Card. 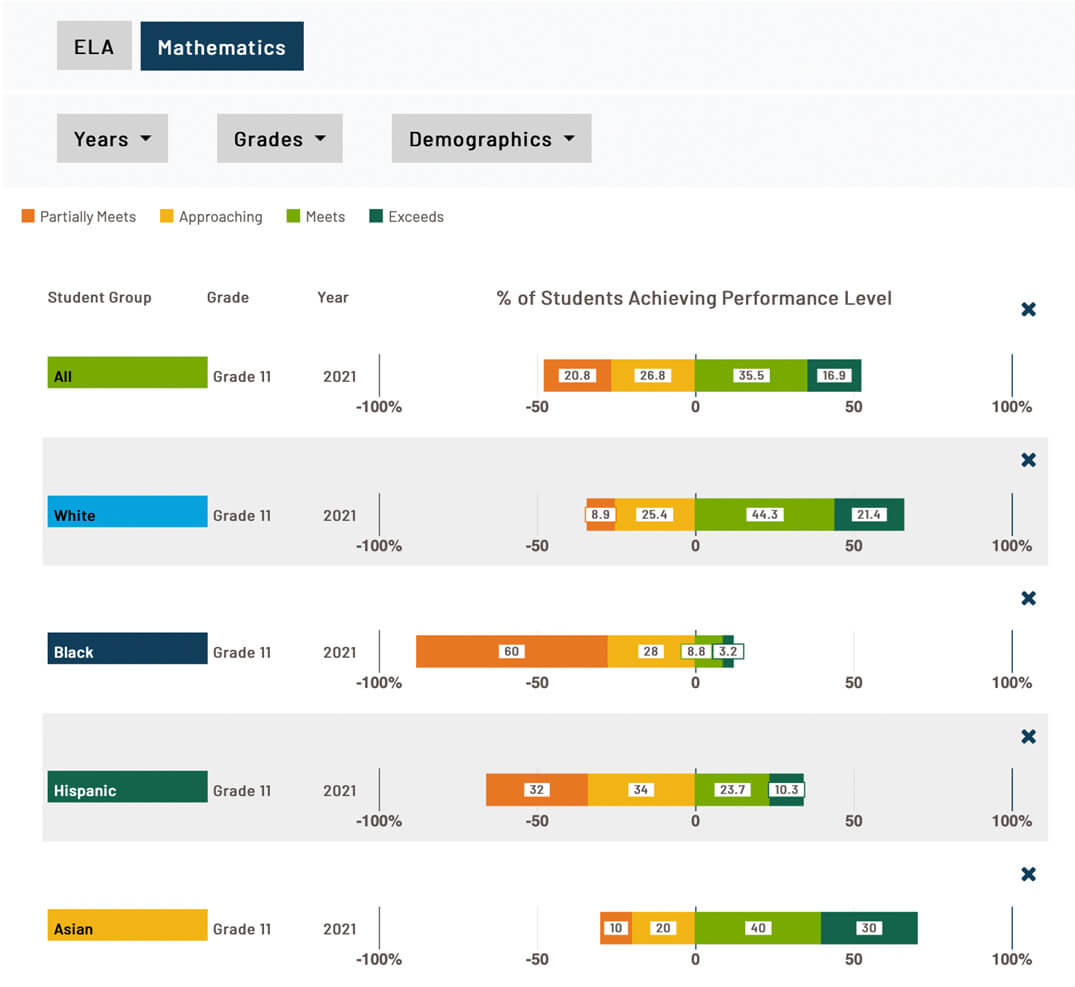 The 2019 SAT results don’t in any way alter the real question: What will the district do, in concert with parents, to ensure that far more black and Hispanic students can master core academic skills?

The answer appears to be that District 200 administrators and elected school board members would rather paper over academic failure with rhetoric. This brings us to our second exhibit: a recent District 200 board meeting slide show about plans to reform grading.

Key among “more equitable grading practices” teachers are already “exploring and implementing,” the board slide shows says, are “competency-based grading, eliminating zeros from the grade book, and encouraging and rewarding growth over time.” All three are highly problematic.

“Competency-based grading” has some appeal because students can move at their own pace based on demonstrating subject mastery. But as Carla Evans of the National Center For Improving Educational Assessment notes, it does “not include whether students turned in homework (at all or on time).” Or that is at least separated out in a behavioral grade apart from academics. In addition, writes Evans, competency-based grading includes baked-in do-overs called “reassessments” which can undermine student motivation to prepare for the first assessment—and which can lead to shifting and lower mastery standards for showing knowledge and skills. That’s because “alternative assessments can be required.”

The potential is there for the process to chase the desired outcome until it is achieved rather than to hold firm to rigorous standards.

District 200’s other two “equitable grading practices” already being explored and implemented are equally problem-ridden. “Eliminating zeros from the grade book” means students who do no work, and perhaps never attend class, will still get some points toward a passing grade. Lousy work habits shouldn’t be enabled by high school administrators and teachers.

Then there’s “encouraging and rewarding growth over time.” Sounds good. But if the growth is from zero or 10 percent competency to 40 percent of needed knowledge and skills, that’s not good enough. The student would still need to be held back.

In the world of business, if you fail the test the first time—or simply don’t measure up, you lose the customer. There are no do-overs.

District 200 tries to have it both ways by noting at the slide show’s end that it “will establish a philosophy of grading based on a rigorous, meaningful and evidence-based process.” In fact, that means it will rigorously adhere to an entrenched rubric of Progressive apologetics.

If you have any doubt, consider the words of the district’s director of equity, Patrick Hardy, on Zoom during the board’s January 27 meeting. He praises the administration’s “racializing our work,” and “racialization of assessments” as key to “how do we build equitable assessments?” (Watch from 2:13:17 to 2:13:55, here). Critics of the initial news report say “nothing to see here” and assert the discussion of the proposed revised practices make no mention of race. But here is “the racialization of assessment” being identified by a top district official as what’s already planned.

Remarkably—and still, in 2022—most of an entire race has had its future options sharply narrowed by the systemic racism of low expectations. It’s shameful. Worse, local educators across Illinois who face the same problem have no real plan for change. Too many communities are content to let black academic failure fester while spouting “equity” and “structural racism” bromides as cover. That has to end.

The District 200 story touched a nerve on the Right and on the Left and set off a national bout of digital tribalism. Sadly, without a bracing intervention, the flame wars over race and “racialization”—both covert and overt—in education will only intensify while core subject mastery by black and Hispanic students continues to languish in K-12 public schools.

The problems of District 200 are the problems of K-12 school districts across the state. As a Wirepoints special report last week detailed, black, Hispanic, and often white students fail to meet basic proficiency benchmarks in reading and math from the third through the 11th grades. Yet they’re socially promoted through high school and too often land in remedial English and math courses in college. Meanwhile, in one Illinois public school district after another, more than 9 in 10 teachers earn official rankings of proficient or excellent.

It’s a systemic scam that shortchanges students most in need of rigorous standards and instruction so they can master core academic skills which help unlock adult success.

Editor’s note: A version of this article appeared originally at Wirepoints.

Editor’s note (June 15, 2022): The first two paragraphs of this story have been edited for clarity.