Shocking footage has emerged online of a drag queen show for children that took place at a gay bar in Dallas, Texas, on Saturday.

The newly-opened “Mr. Misster” hosted a “Drag the Kids to Pride” event where scantily clad drag queens gyrated in front of young children, and invited them to join them on stage. 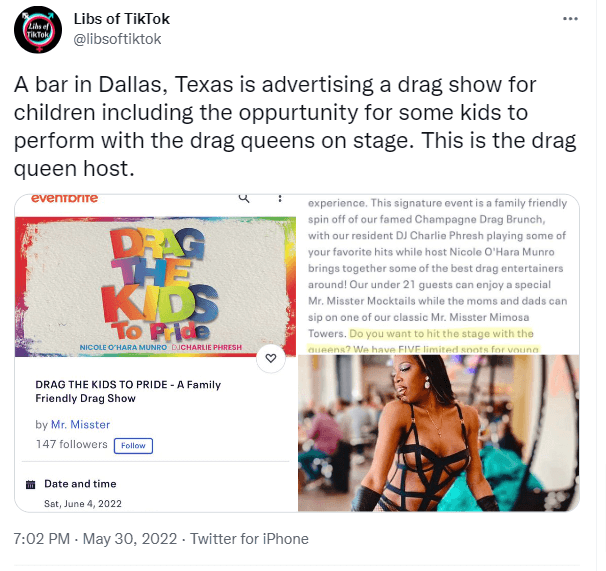 Independent journalists Taylor Hansen (in tutu) and Aldo Buttozoni infiltrated the event, and recorded the depraved antics inside the venue.

“If you think you can do it like we do, I want you to come up real quick,” a drag queen told the children. The transvestite asked if the boys “want to be a diva” and told them to pick a drag queen to partner with. The children who attended the show appeared to be under ten years old, and included babies and toddlers.

Children are invited on stage and walk with the Drag Queens pic.twitter.com/PGmt5oIxkD

The crowd cheered as children walked with the drag performers

There were toddlers in the audience as well pic.twitter.com/WzVC4Vza1P

A Drag Queen just dropped it low for a child and took money from them as well. pic.twitter.com/s7MJhLplzX

The event was advertised as a “child friendly” drag show, although signs in the bar read “It’s not gonna lick itself” and “I licked it so it’s mine.”

A “child friendly” drag show is being hosted today in Dallas, TX at a gay bar.

Here are two of the signs on display. pic.twitter.com/RtoggJhyK2

Shocking videos showed parents giving their children money to give the gyrating transvestites.

This is not even the worst footage to come out of the event believe it or not. pic.twitter.com/uIodp84Naf

Photos from the “Drag the Kids to Pride” event at Mr. Misster bar in Dallas pic.twitter.com/Qoop4Vsk7J

Conservative activist/comedian Alex Stein attempted to enter the bar but was denied entry. Masked pro-groomers assaulted him and tried to steal his phone outside the event.

“I thought you guys were inclusive,” Stein hollered in protest. “You guys are bigots! You won’t let me in here, but you’re gonna let children,” he exclaimed, before being forced off of the premise.

Outside the venue, pro-groomers also clashed with anti-groomers who showed up to protest the drag show for children.

A confrontation just took place between a protester and event attendees. pic.twitter.com/g0qyQ2tjmc

Hanson’s girlfriend was spat upon by one of the attendees as he was leaving the event.

My girlfriend was just spat on for recording—

The journalist said a police report was filed, and the assailant would be charged with misdemeanor assault. He added that there were multiple police reports filed against attendees of the event for assault.

Stein tailed one of the drag queens after the show, and asked him how he feels “exploiting little children.”

Asking the drag queen how she feels for exploiting little children? pic.twitter.com/Jlho6qL1e2

Hansen said the “Drag Your Kids to Pride” event was “by far” the hardest and grossest thing he’d ever had to report on.

“Over all, it was just terrible. It was disgusting,” he reported from his car as he was riding home from the show.

Hansen said that the most disturbing thing he saw was a little boy at the bar who was ignoring the Drag show and playing on his Nintendo.

He said he overheard the boy tell the bartender that he wasn’t gay. “His mom butted in, interrupted this child and said, ‘no, he is gay, don’t let him lie to you, he is.'”

Hansen said you could just tell that the kid was “super uncomfortable” and “obviously not gay.” He said the boy worked on his Rubic’s Cube as well, and solved the puzzle three times.

As you can tell— this kid was SUPER interested in Drag! pic.twitter.com/BIRSgSRKtX