The White House on Monday announced a second global COVID-19 summit to discuss how to bolster vaccination rates internationally, despite data from around the world showing the mRNA and adenovirus-vector vaccines do not stop the spread of the virus, and appear to be associated with a higher rate of non-COVID deaths.

In a joint statement with Belize, Germany, Indonesia, and Senegal, the White House said the purpose of the summit, which is scheduled to be held virtually on May 12, will be to “redouble our collective efforts to end the acute phase of the COVID-19 pandemic and prepare for future health threats.”

“The emergence and spread of new variants, like Omicron, have reinforced the need for a strategy aimed at controlling Covid-19 worldwide. Together, we can mitigate the impact of Covid-19 and protect those at the highest risk with vaccinations, testing, and treatments,” the statement said. “We know we must prepare now to build, sustain, and finance the global capacity we need, not only for emerging Covid-19 variants, but also future health crises.”

The summit originally was scheduled for March but was pushed to April after the Russian invasion of Ukraine, and because the administration was still working with Congress to secure funding “for millions of people in low- and middle-income countries,” Politico reported. The event was reportedly postponed again on April 5 after Congress voted down the $19 billion in additional funding USAID requested to support its efforts to ramp up vaccination rates in 11 low-income African countries through the end of the year.

For instance, in “low-income” Nigeria (population 206 million), only 6.5 percent of the population is fully vaccinated, yet the country has had only 3,143 COVID deaths compared to 987,000 deaths in the heavily vaccinated United States. In Cameroon (population 26.55 million), only 1,927 people have died of the virus. Low COVID fatality rates, in fact, are typical throughout Africa, even though rates of infection have been high.

A recent WHO study found that true infections in Africa were 97 percent greater than initially recorded, which means that 65 percent of the entire continent has already been infected. The authors of the study estimated that the infection rate had reached 76 percent in West Africa by the end of the third quarter of 2021, before Omicron hit.

“Despite repeated warnings from WHO director-general Tedros Adhanom Ghebreyesus that the coronavirus would devastate Africa, the continent has been among the least affected by the pandemic,” the Associated Press couldn’t help but notice.

To explain the disparity, the WHO pointed out that Africans tend to have fewer comorbidities than people in other nations.

In its new analysis, WHO said the milder COVID-19 cases seen in Africa were attributable in part to the continent’s much smaller proportion of people with underlying risk factors like high blood pressure, diabetes and heart disease.

Another factor could be the antiparasitic and antiviral drug Ivermectin. Mortality was significantly lower in African countries that participated in an intensive campaign for Ivermectin use to to control onchocerciasis, also known as river blindness.

New Zealand (population 5 million) was doing similarly well for the first two years of the pandemic amid draconian lockdown policies. But things changed for the island nation after its mass vaccination campaign, as noted by The Blaze‘s Daniel Horowitz:

According to the NZ ministry of health, every age bracket has achieved higher than a 90% vaccination rate except for those ages 5-11. Also, more than half of all adults, especially those in vulnerable categories, have boosters.

Thus, New Zealand lived out the COVID bio-state dream. The population fully locked down until three doses were available. Thus, they should be experiencing no COVID, and certainly no COVID deaths, right? Well, in fact, New Zealand experienced nearly all of its deaths precisely after all of this was accomplished in March 2022! And with the mildest of variants! 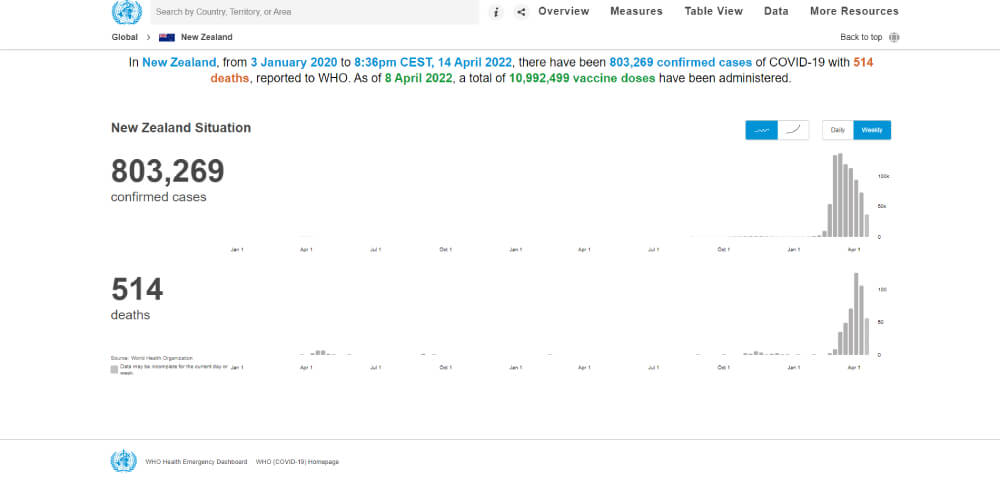 The May 12 summit, the White House statement said, will focus on several areas and “place an emphasis on supporting locally-led solutions to both immediate and long-term challenges.”

But the verdict on the worldwide mass vaccination campaign is in already.

COVID rates have soared since Biden convened the first global COVID-19 summit in September, as the Delta and Omicron variants proved to be impervious to the vaccines.

And the data in country after country show huge increases in COVID cases where most people are fully vaccinated, along with unacceptable levels of vaccine injuries and deaths.

The shots have failed.

So naturally, the Biden regime is repeating and reinforcing its global mass vaccination agenda.

The White House called on “world leaders, members of civil society, non-governmental organizations, philanthropists, and the private sector to make new commitments and bring solutions to vaccinate the world, save lives now, and build better health security—for everyone, everywhere.”

At the top of the list of solutions is “getting shots into arms.”