In the tweet, failed politician and fired radio show host Joe Walsh wrote: “@TuckerCarlson tonight: “What if these bodies of tortured, dead civilians were staged? What if they’re fake? What if the Ukrainian military killed them & then blamed Russia? I’m not saying any of this is true, I’m just asking the questions. Why can’t we ask these questions?”

.@TuckerCarlson tonight: “What if these bodies of tortured, dead civilians were staged? What if they’re fake? What if the Ukrainian military killed them & then blamed Russia? I’m not saying any of this is true, I’m just asking the questions. Why can’t we ask these questions?”

In truth, Carlson said no such thing on his program regarding recent reports of Russian war crimes in Bucha, Ukraine. 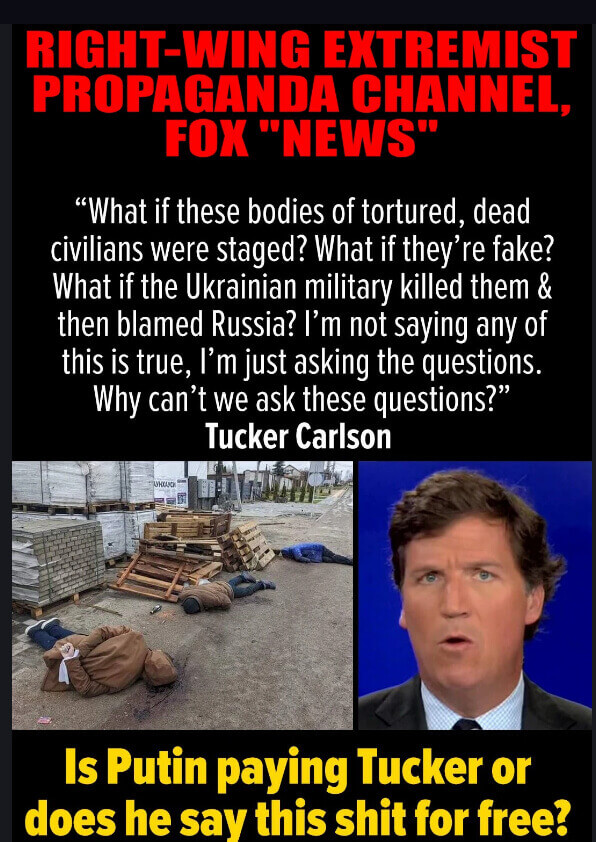 “it should trouble every american that the right wing and trump are in absolute sync (and have been) with putin,” Zalenski wrote. “their talking points and anti-democratic actions and agendas are antagonistic to the rule of law and ongoing–and have led to two impeachments and an attack on congress”.

In a series of tweets, journalist Andy Ngo called out the Blue Anon influencers for falling for the fabricated quote.

Liberal icon @TheRickWilson fabricated a quote, attributed it to me, and now his drooling Dem fans are saying this is proof I'm a traitor. They should transfer more of their paycheck to his account to satiate their rage.

*Fake quotes are fine with Twitter if for the right cause: pic.twitter.com/EjOxK8SwpF

Greenwald pointed out on Twitter that NeverTrumper Rep. Adam Kinzinger (R-Ill.) fell for Walsh’s hoax. “I gotta say, if @TuckerCarlson is not a Russian asset he should be, he overqualified for the job. Is he a Russian asset? I don’t know, I’m just asking questions,” Kinzinger tweeted.

The incomparably dumb and unhinged @AdamKinzinger took a fabricated quote from long-time-deadbeat-dad-turned-liberal-hero @WalshFreedom, believed it true, and used it to declare a journalist a "Russian asset" – just as hordes of dumb liberals did with @TheRickWilson's fake quote. pic.twitter.com/vhRaKDy6wE

Twelve hours after his fabricated tweet went viral, Walsh admitted that he had made the whole thing up.

“I tweeted this out this morning. I was predicting what Tucker Carlson would say “tonight,” he explained. “Here’s what’s funny: So many people read this tweet & believed Tucker had already said it. Which is understandable becuz it’s EXACTLY the kind of thing Putin-lover Tucker would & has said.”

I tweeted this out this morning. I was predicting what @TuckerCarlson would say “tonight.” Here’s what’s funny: So many people read this tweet & believed Tucker had already said it. Which is understandable becuz it’s EXACTLY the kind of thing Putin-lover Tucker would & has said. https://t.co/dxDLDjOPK1

In reaction to Ngo’s Twitter thread, Walsh wrote, “Now don’t u go fabricating stuff Andy. I tweeted that out yesterday morning, before last night’s show. And I purposely said “tonight,” predicting what he would say last night. It’s understandable that people thought he had already said it because that’s the kind of thing he says.”

However, Walsh allowed his tweet to go viral for twelve hours, during which time he retweeted two liberal influencers who had reacted negatively to the fabricated quote, without informing them that it was fake.

In a subsequent tweet, Walsh wrote that he “constantly” goes after Carlson and other conservative personalities because what they do is “dangerous,” and he’s “trying to defeat it.”

Because I come from their world of right wing media. I know what they’re doing. I used to do it too. I know how dangerous it is. So I’m trying to defeat it.

He went on to claim that he left the right-wing media world because he “got sick of the dishonesty.”

Good questions @charlie_white. I left because I was constantly pressured to support Trump (I wouldn’t) & I got sick of the dishonesty. Most right-wing talkers won’t follow my lead because it’s a great gig that pays well. The same reason Republicans won’t speak out against Trump. https://t.co/MP3Sl2k4hk

Carlson had Greenwald on his show Tuesday night to discuss the the fake quotes that were attributed to them.

“Walsh is known for his willingness to say anything that might help the Democratic party whether it’s true or not,” Carlson said. The Fox News host then pointed out that Twitter allowed the blatant lie to stand. “It’s still up now,” he said, adding that he would have responded to Walsh’s disinformation, but he has been suspended for Twitter for stating accurately that Joe Biden’s “most famous admiral, Rachel Levine, was born a man.”

Glenn: "I guess the only thing I can say for each of us is that we have the best possible enemies." pic.twitter.com/obGziwPjrz