Undersecretary of State Victoria Nuland admitted during a Senate hearing on Tuesday that there are biological research facilities in Ukraine that are under the control of the United States government.

In response to a question from Sen. Marco Rubio (R-Fla.), Nuland said that any chemical or biological weapons release in Ukraine, would be the fault of the Russian invaders.

Nuland, who helped engineer Ukraine’s “regime change” coup in  2014 when she was the Assistant Secretary of State for European Affairs under Barack Obama, said
the United States is working to prevent Russia from capturing the facilities.

“Does Ukraine have chemical or biological weapons?” Rubio asked.

“Ukraine has biological research facilities which, in fact, we’re now quite concerned Russian troops, Russian forces may be seeking to gain control of, so we are working with the Ukrainians on how we can prevent any of those research materials from falling into the hands of Russian forces should they approach,” Nuland answered.

The U.S. Embassy in Ukraine states on its website that the the U.S. Department of Defense runs a “Biological Threat Reduction Program” in the country.

The U.S. Department of Defense’s Biological Threat Reduction Program collaborates with partner countries to counter the threat of outbreaks (deliberate, accidental, or natural) of the world’s most dangerous infectious diseases.  The program accomplishes its bio-threat reduction mission through development of a bio-risk management culture; international research partnerships; and partner capacity for enhanced bio-security, bio-safety, and bio-surveillance measures. The Biological Threat Reduction Program’s priorities in Ukraine are to consolidate and secure pathogens and toxins of security concern and to continue to ensure Ukraine can detect and report outbreaks caused by dangerous pathogens before they pose security or stability threats.

The Embassy lists several active research projects on which Ukrainian and American scientists are collaborating:

The presence of the U.S. bio research labs have caused controversy in Ukraine for many years, according to Ukrainian journalist Dmitry Skvortsov.

In 2018, a member of Medvedchuk’s party, Renat Kuzmin, resumed the topic of American bio-laboratories in connection with the revelations of former Georgian state security Minister Giorgadze. According to him, the activities of the laboratory built by the Pentagon near Tbilisi was the cause of dozens of deaths of local residents.

Rubio said that the Russians are putting out “propaganda” about “how they have uncovered a plot by the Ukrainians to unleash biological weapons in the country” with NATO’s help.

“If there is a biological or chemical weapon incident or attack inside Ukraine, is there any doubt in your mind that 100 percent it would be the Russians behind it?” he asked.

Nuland replied: “There is no doubt in my mind, senator. And in fact, it is a classic Russian technique to blame the other guy for what they are planning to do themselves.”

Ukraine has "biological research facilities," says Undersecretary of State Victoria Nuland, when asked by Sen Rubio if Ukraine has biological or chemical weapons, and says she's worried Russia may get them. But she says she's 100% sure if there's a biological attack, it's Russia. pic.twitter.com/uo3dHDMfAS

This comes after Western officials called Russian and Chinese accusations that the U.S. military was operating “dangerous” biolabs in Ukraine, conspiracy theories.

“U.S. biolabs in Ukraine have indeed attracted much attention recently,” Chinese Foreign Ministry spokesman Zhao Lijian said Tuesday, according to Bloomberg. Lijian added that “all dangerous pathogens in Ukraine must be stored in these labs and all research activities are led by the U.S. side.”  Bloomberg noted that Chinese official made the comments “without providing evidence to back up the claim.”

Russian officials have also accused the U.S. of running a bioweapons program in Ukraine.

In a press conference last week, Russian foreign minister Sergei Lavrov said “the Pentagon built two biowarfare labs and they have been developing pathogens there in Kyiv and in Odessa.”

Leonid Slutsky, head of the Duma Committee on International Affairs and a member of the Russian delegation at the talks with Ukraine, argued that the labs “confirm that the Russian Federation had good reasons for conducting a special military operation to demilitarize Ukraine.”

American officials insist that that scientific work is being carried out for only peaceful purposes.

A now deleted 2010 article in BioPrepWatch.com, unearthed by the Daily Pulse, details how “Barack Obama, while serving as an Illinois Senator, helped negotiate a deal to build a level-3 bio-safety lab in the Ukrainian city of Odessa.”

The article, which also highlighted the work of former Senator Dick Lugar, was additionally included in Issue No. 818 of the United States Air Force (USAF) Counterproliferation Center’s Outreach Journal.

“Lugar said plans for the facility began in 2005 when he and then-Senator Barack Obama entered a partnership with Ukrainian officials. Lugar and Obama also helped coordinate efforts between the U.S and Ukrainian researchers that year in an effort to study and help prevent avian flu,” explained author Tina Redlup. 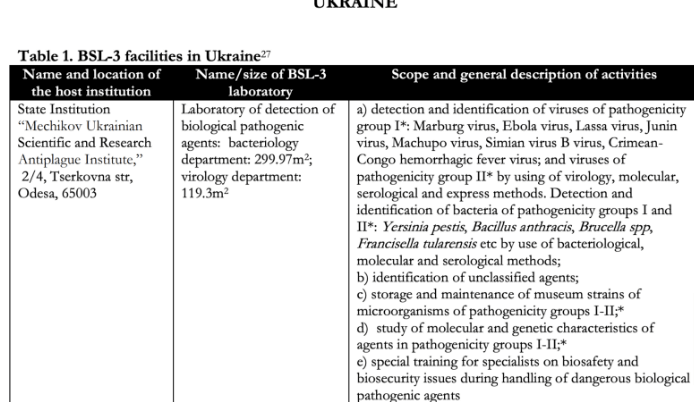