While the media has moved on from COVID—focusing mainly on Russia-Ukraine conflict for now—the 2,000-strong “People’s Convoy” continues to make its way across the United States, attracting huge crowds of supporters everywhere it goes.

On Monday, the convoy passed through Missouri, stopping in the small Ozark town St. Robert with special guest Eric Greitens for a rally attended by several hundred supporters. 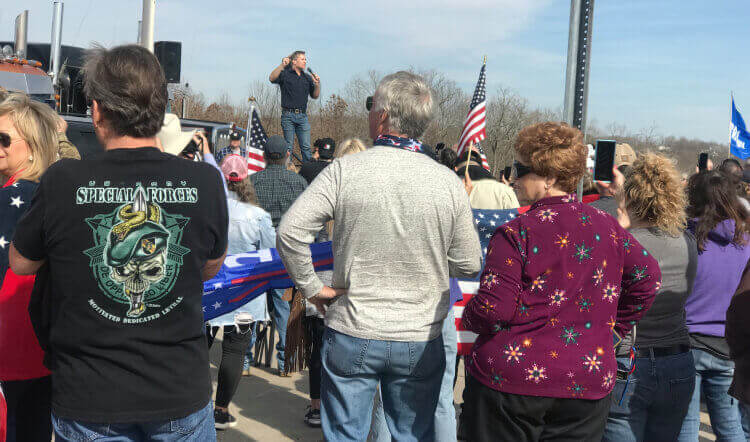 Greitens, a former Navy SEAL who was the 56th governor of Missouri, is now running for the U.S. Senate in the Show-Me State. He said it was important for Americans of all stripes to “stand up” because the people behind the lockdowns and mandates are “a group of tyrants, and liars, and bullies.”

At #PeoplesConvoy rally in St. Robert, Former Missouri governor Eric Greitens says it’s time for us to stand up to the COVID bullies and tyrants. pic.twitter.com/tWYeAGQsfb 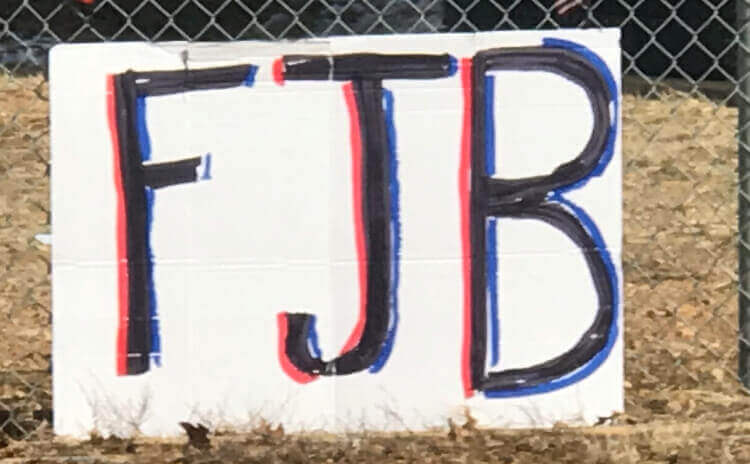 The People’s Convoy’s grandiose mission is about more than just ending COVID tyranny: “We the People of the United States, in Order to restore our once perfect Union, re-establish Justice, insure domestic Tranquility, provide for the common defense of all, promote the general Welfare, and secure the Blessings of Liberty, do ordain and establish the restoration movement of The People’s Convoy for the United States of America,” the group states on its website.

The group is calling on Joe Biden to lift the COVID-19 national emergency declaration immediately to allow “our cherished Constitution to reign supreme.” And organizers are stressing a message of unity.

“We are the people of the United States of America and we stand together under the banner of freedom—freedom is the one thing that unites us all. Liberty flows through all of our veins,” the website says.

Leigh Dundas, a human rights attorney from California who is traveling with the convoy, echoed that bipartisan message at the rally in St. Robert, Monday afternoon.

“We have had gay pride flags, we have had people of every color, every nationality, immigrants, native born, and everything in between—every religion, every political belief—Bernie Sanders supporters rolling with us—and to a man, and to a woman, they are OVER these restrictions because they are anti-American, and they are with the truckers who are saying lets get back to finding common ground,” said Dundas.

The lawyer said Missouri was the sixth state the convoy had passed through in six days.

“We are 100 percent committed to the message of restoring freedom and accountability in this country, and to getting these guys and girls safely across this country so they can tell their message at the other end of the line,” she added. 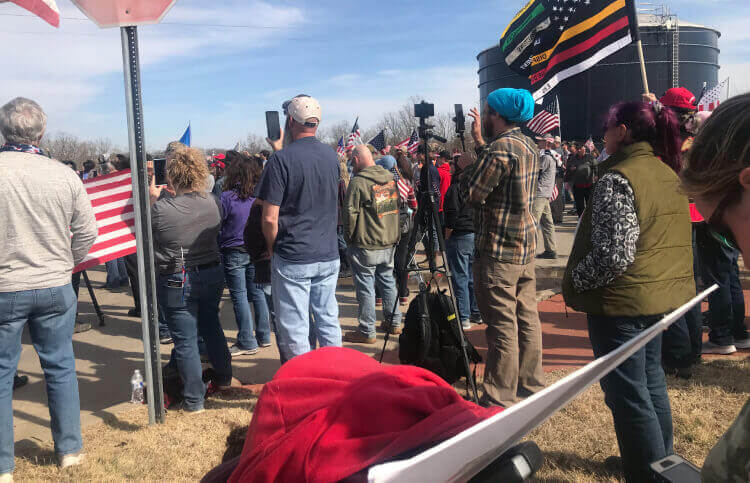 Dundas thanked the crowd for their support, and noted happily that “every single overpass without exception” along the way—”even in the middle of Nowhereville” has been filled with crowds of supporters waving flags.

Brian Brase, a co-organizer of the convoy, and a trucker himself, said that he has been brought to tears more than once by the awesome show of support he’s seen on the road.

#PeoplesConvoy organizer Brian Brase says in St. Robert, Mo. that he’s been brought to tears multiple times over the awesome show of support he’s seen on the road. pic.twitter.com/QOfqeyZq9g

The size of the convoy fluctuates from day to day, Brase told American Greatness. Because the truckers have been working around their schedules to participate in the movement, they join the convoy for a day or two, and then peel off to go to work. Brase estimated that the numbers of the vehicles in the convoy have ranged from 500 to three thousand.

Partial Drone footage of the People’s Convoy at a stopover in St. Robert, Missouri earlier today…
Follow us on youtube to see the DC ride: https://t.co/XhkLMjWzGW
share pic.twitter.com/yH1hFGxk6U

The group is headed to the Washington D.C. area, but not D.C. proper, Dundas told American Greatness. The endpoint will be somewhere near Washington D.C., but more hospitable,” she said. The plan is for the convoy to hold a huge rally with the COVID-19 Critical Care Alliance doctors like Drs. Robert Malone, and Peter McCullough, she said.

The convoy is set to arrive in the D.C. Beltway area on Saturday, March 5.