Inspired by the “Freedom Convoy” in Canada, American truckers have organized their own nationwide “Convoy to DC” in protest of the Biden regime’s authoritarian COVID policies.

Truckers gathered in San Bernardino County, California, Wednesday, to launch their “People’s Convoy” cross country road trip to Washington D.C. to demand an end to the declaration of national emergency concerning the COVID-19 pandemic, and the restoration of our Constitution.

Hundreds of vehicles assembled at the Adelanto Stadium parking lot for a rally ahead of the group’s eastward trek on Interstate 40 to Kingman, Arizona for the Convoy’s first stop.

Adelanto, California: Several hundred vehicles out this morning as ‘The People’s Convoy’ to DC gathers outside Adelanto Stadium pic.twitter.com/lqyy7oXnFQ

The convoy plans to take a southern route through Arizona, New Mexico, Texas and Oklahoma, before veering northeast through Missouri, Illinois, Indiana, Ohio, Pennsylvania, and Maryland, arriving in the D.C. area on March 5. 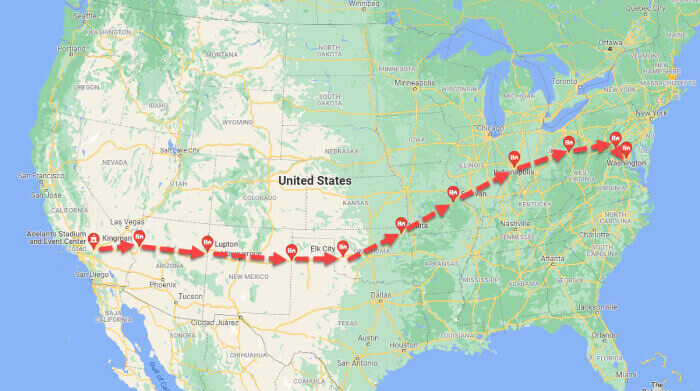 Organizers stressed in an interview on Newsmax’s “Spicer & Co.” that their effort will be peaceful and will kick off with prayer.

Brian Brase and Marcus Summers said they weren’t “worried how the media tries to spin it, since their actions will be obvious to everyone watching.”

The corporate media have already spread disinformation about the convoy planning to disrupt the Super Bowl, and Joe Biden’s State of the Union speech on March 1.

The Biden Regime will reportedly deploy up to 800 National Guard troops ahead of the SOTU, “amid fears over the protest convoy of truckers heading to Washington DC for the event.

Mayor Muriel Bowser and the Pentagon confirmed that National Guard personnel have been requested to “provide support at traffic control points in and around the District” and to be alert for “possible disruption at key traffic arteries.”

Recall, former President Trump was called a dictator after he called for National Guard troops to be deployed to protect Washington D.C. and other cities from left-wing rioters in 2020. The truckers don’t even plan to be in the D.C area until March 5, well after Biden’s SOTU speech.

“We’ve preached from the very beginning that this is a peaceful movement across the country,” Brase said. “And while we are keeping some of our plans pretty close to the chest, it’ll be pretty clear that the People’s Convoy is peaceful.”
Summers told host Sean Spicer that the convoy plans to “hold the line” until all the federal mandates are lifted, “from healthcare to pilots to military.”

“So we’re looking for, obviously, restoration of our liberty and freedoms,” Brase said. “You know our civil liberties, our freedoms as Americans as part of this and then ultimately it’s ending that emergency powers authorization that is in there, that state of emergency. If we get that state of emergency ended, then the mandates can go with it. And so that’s what we’re trying.”

California Truckers Sing "Amazing Grace" As They Are About to Take Off for Washington, D.C. 🇺🇸 pic.twitter.com/CEwriiEAbI

Live coverage of the People’s Convoy Rally in Adelanto, CA below:

Over a thousand vehicles reportedly left the Adelanto stadium after the rally this afternoon on route to Kingman, AZ.

Over a thousand vehicles are now outside Adelanto Stadium, as ‘The People’s Convoy’ towards Washington DC prepares to depart from California pic.twitter.com/tHqQnWzlRZ

Trucks lining up into position as the convoy towards DC prepares to depart from Adelanto, California this Wednesday morning pic.twitter.com/syVd9pqt47