Richard Hirschman, a funeral director and embalmer from Alabama, with over twenty years of experience in the field, has said in recent interviews that he had never seen anything like it until around the middle of 2021, after the mass injections of the experimental COVID vaccines began. He says his colleagues in the field are seeing the same thing, and the numbers are increasing.

Earlier this month, Hirschman told Steve Kirsch, the Executive Director of the Vaccine Research Center, that in Jan 2022, 37 out of 57 bodies (65 percent) had these suspicious clots.

Prior to the vaccines, Hirschman said blood clots in patients who died of COVID were seen, but they appeared to be more typical, and not in the alarming numbers he’s seeing now.

Since Hirschman has gone public, Cary D. Watkins, a colleague from Alabama with over 50 years experience as a funeral director and embalmer, has come forward to corroborate his story, and Anna Foster, an embalmer from Missouri with 11 years of experience, has revealed in an interview that 93 percent of her last 30 cases died due to unusual clots completely filling their vascular systems.

Funeral director John O’Looney of Milton Keynes, England, is also blowing the whistle on the alarming increase in number of thrombosis deaths. O’Looney said in an interview that it’s not just “a two or three-fold increase—it’s around a 500 or 600 percent increase,” and nine out of ten of these cases were vaccinated.

“I’ve got doctors and police ringing me, nurses ringing me, all saying the same thing. It’s a total lie. On our media, they are saying the hospitals are full of the non-vaccinated. That’s a total fabrication. It’s the polar opposite. Nine out of ten patients in there, full of blood clots, are the vaccinated. I’ve heard that from so many professionals that I’ve lost count. So, whether you choose to believe it or not, it makes it no worse. That is the truth. That is the reality. You can lead a horse to water, but you can’t make it drink,” O’Looney said in an interview late last month.

Hirschman told the Blaze’s Daniel Horowitz on his Conservative Review podcast Wednesday, that he was hesitant to come forward because any information that questions the government’s pro-vaccine narrative gets mocked and ridiculed, and his reputation could suffer.

But as Kirsch pointed out, there is no other explanation for what is happening.

“It pretty much has to be a novel injectable product, first used in 2021 that results in blood clots and is injected into well over 50 percent of the population. There is only one drug that fits that bill: the COVID vaccines,” he wrote on his Substack.

Since the vast majority of people survive the shots, the question of whether a vaccinated person dies or not is likely a combination of how well they “take up and replicate the mRNA, how dangerous the batch is, and other factors,” Kirsch wrote.

He explained why Hirschman’s information is “explosive.”

So let’s say the actual rate of vaccine-caused deaths is 40 percent of all deaths (which is less than the 65 percent rate that Hirschman is seeing).

The CDC says around 65,000 people die a week. So that would be 26,000 people a week killed by the vaccine. He started noticing these deaths in May (they could have started sooner), so let’s just say it’s only been in the last 6 months to be conservative.

Hirschman told Horowitz  that he’s discussed the phenomenon with 15 of his colleagues, and every one of them has seen same things he has, but they are afraid to speak out publicly.

Hirschman, who was first interviewed by Dr. Jane Ruby in late January, shared photos and videos of the strange fibrous clots that were extracted from people who reportedly died of heart attacks, strokes, and aneurysms. 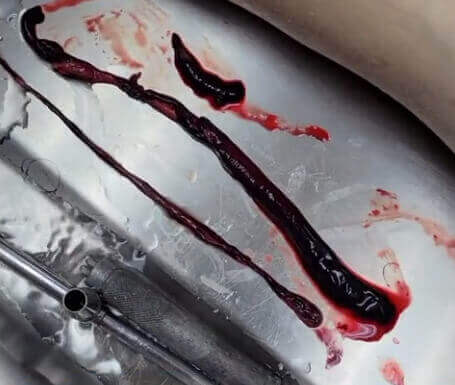 In many cases, Hirschman says, the freakishly long clots start out looking fairly typical on one end, and then become white and fibrous and wormlike.  The specimen below, which bifurcates toward the end, was allegedly taken from a person’s groin area, and was nearly the length of their leg.

Hirschman washed off the white, fibrous portions of the clots from one person, and put the worm-like materials in a bowl. 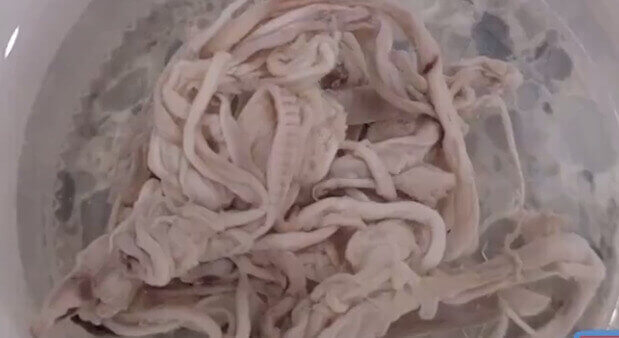 “That white, fibrous stuff just isn’t normal, Hirschman told Dr. Ruby. “Typically a blood clot is smooth—it’s blood that’s coagulated—but if you squeeze it, or touch it, or try to pick it up, it generally falls apart,” he explained. “But this white, fibrous stuff is pretty strong. It’s not weak at all. You can manipulate it, it’s very pliable, it’s not hard—it is not normal,” the embalmer insisted. “I don’t know how anybody can live with this inside him.”

Hirschman said he’s seen the abnormal blood clots mostly in older people, but pointed out that younger people tend to be cremated these days, so he doesn’t see those cases.

He also noted that he has only seen the strange clots in one unvaccinated case—in a person who had received a blood transfusion—the implications of which are terrifying.

Below are several videos of Hirschman telling his story in multiple interviews over the past few weeks, starting with Dr. Ruby’s bombshell interviews.

Last month, an Indianapolis-based insurance company CEO announced that the death rate among working-age people in the state had shot up a stunning 40 percent from pre-pandemic levels, providing further evidence that the vaccine mandates are making people ill.

Attorney Thomas Renz, a member of America’s Frontline Doctors’ legal team, revealed during a panel discussion in the United States Senate a few weeks ago that the U.S. government is ignoring several alarming vaccine safety signals among vaccinated members of the military. Renz revealed that Department of Defense data showed massive spikes in cancer, miscarriages, pulmonary embolisms, Bell’s palsy, and neurological damage post-inoculation. The information was provided by three military doctors who have access to the vaccination data.

Politifact later determined the report to be “false” after the DoD claimed there was “a glitch in the database.”

Peter Graves, spokesperson for the Defense Health Agency’s Armed Forces Surveillance Division (DMED), told Politifact that the data for 2021 is correct, but for some reason, the data for the five years prior was inaccurate.

He said that the division reviewed data in the DMED “and found that the data was incorrect for the years 2016-2020.”

Daniel Horowitz found the explanation to be less than convincing. “A system that was designed to be monitored day to day by DHA officials for five straight years … was completely corrupted,” he noted on his podcast. “For five years straight it was corrupted, and then starting in 2021, it fixed itself on its own and they didn’t know about it until Thomas Renz brought it up.”

American Greatness reached out to Hirschman to ask if a scientific analysis of the blood clot materials has been done yet. He said he is working on finding someone he can trust to do a fair analysis because the situation has very grave implications and there are many who have the incentive to dismiss it.

He said he plans to provide samples to more than one analyst “to make sure they all have the same findings.”

Hirschman also told American Greatness that doctors have told him that the materials look like fibrin, a major component of a blood clot. Fibrin is defined as “a strong insoluble protein produced by the body in response to bleeding.”

He sent screenshots of texts from several other embalmers who reached out to him after he went public, telling him they’ve been seeing the same things.

“Thank you for not making me think I am CRAZY!!” one colleague wrote, who went on to describe the clots as “almost alien-like” in appearance. Another embalmer said she has been seeing the same thing and it’s “mind boggling.”

Another said they have seen a lot of this at their funeral home and “the truth is being stifled and people don’t want to hear the truth.”

Hirschman told American Greatness that he is afraid of having his reputation destroyed, but “because I have such a strong faith in God I am accountable to Him. And I have a strong feeling that this is virus and vaccine related so I can’t stay silent.”