Quintez Brown was charged with attempted murder and four counts of wanton endangerment, after firing his gun inside Greenberg’s campaign office.

Greenberg, who is a Democrat, and Jewish, said he and four campaign staffers were in a morning meeting in Butchertown when Brown walked in and opened fire.
“When we greeted him, he pulled out a gun, aimed directly at me and began shooting,”  Greenberg said at a news conference.

The candidate was left unharmed but shaken, according to the New York Times, “and with a bullet hole in the back of his sweater.”

He then fled the building. About 10 minutes later, officers located a man matching the suspect description less than a half-mile away. He was found carrying a loaded 9mm magazine in his pants pocket and was taken into custody, the arrest report says.

The incident was reportedly captured on surveillance video.

Following the shooting, Greenberg tweeted “my team and I are fortunately all safe…I will provide an update as soon as possible.”

The 21-year old suspect appeared to be a rising star in left-wing media circles.

In 2018, the alleged gunman sat down with MSNBC host Joy Reid in the nation’s capital for a segment promoting the students who participated in the anti-gun “March For Our Lives” protests in Washington, D.C.  Brown was then the 17-year-old president of the Black Student Union at duPont Manual High School in Louisville.

Addressing Kentucky Republican Sen. Mitch McConnell, who was the Senate majority leader at the time, Brown said students want Congress to act on guns, “and if you’re not going to give us that, then we’re going to get everyone out here to vote, and we’re going to vote you out of office.”

Brown was reportedly selected to meet former President Obama when he was a freshman in college.

As a freshman political science major at University of Louisville, Brown was one of 22 students in the country invited to the inaugural national gathering of the Obama Foundation’s My Brother’s Keeper Alliance that supports boys and young men of color. He traveled to Oakland, California, and was quoted as saying he had the opportunity to shake hands with Obama himself during a two-day workshop.

Quintez Brown (@tez4liberation), the black nationalist & #BLM activist who allegedly tried to assassinate a Louisville mayoral candidate, was recognized by the Obama Foundation & got to meet the former president. He was also championed by race hustlers @JoyAnnReid & @TheRevAl. pic.twitter.com/T0LlNxNFZo

Brown has previously written columns about race, social justice, and gun control for the Louisville Courier Journal as an intern and an editorial columnist, according to Fox News. In other publications, he has celebrated cop killer Assata Shakur, and defended communism.

“During our short stay on this glorious planet we all have been collectively dehumanized and reduced to political talking points — Black, white, liberal, conservative, Christian, criminal, boss, worker, activist, etc.,” Brown wrote. “Our sick, manipulated brethren will weaponize common sense and tell us to ‘face to facts’ — as if facts are something outside of us as if life were something we encounter as foreigners*. They will tell us that communism and collectivism has never and will never work and refuse to even explore these “childish” (or inferior) ideas.”

Brown wrote a piece for the Courier-Journal in July of 2019, titled, “Kentucky’s concealed carry law shows your life doesn’t matter to gun-loving Republicans.” 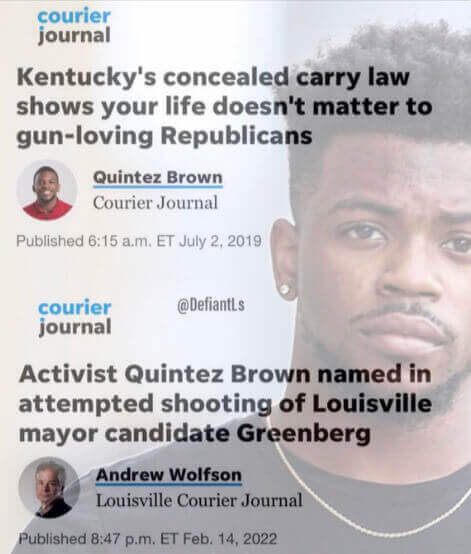 His Twitter bio says, “We have one scientific and correct solution, Pan-Africanism: the total liberation and unification of Africa under scientific socialism.”

The suspect is also a Black Lives Matter agitator who was involved in riots in Louisville during the summer of 2020 after police officers killed Breonna Taylor during a botched drug raid in her apartment that March.

Brown  made headlines last summer when his family reported him missing. He was found safe on July 1, about two weeks after vanishing, and his family subsequently asked for privacy and patience “while we tend to the most immediate need, which is Quintez’s physical, mental and spiritual needs.”

Greenberg’s top campaign issue appears to be public safety, according to his website, where he has outlined an eight-page plan that includes hiring nearly 300 police officers, dedicating more resources to solving violent crime, and making sure illegal guns stay off the streets.

“Too many Louisville families have experienced the trauma of gun violence,” Mr. Greenberg said in a statement after the shooting. “Too many in Louisville were not as blessed as my team and I were today to survive. Clearly, much more work needs to be done to end this senseless gun violence and make Louisville a safer place for everyone.”

Police have not yet determined a motive for the shooting, but mentioned some possibilities during a news conference.

Chief Erika Shields of the Louisville Metro Police Department said that possible reasons for the attack include Greenberg’s mayoral candidacy or his Jewish identity, adding that it was also conceivable that the police were “dealing with someone who has mental issues or is venomous.”