Inspired by their Canadian brethren, American truckers have decided to form their own nationwide “Convoy to DC” in protest of the Biden regime’s authoritarian COVID policies.

“We are part of many large groups who believe in our founding fathers. We believe everyone has a voice. We support our freedom. Help us spread the word about this group and together we all can make it a better place. God Bless America,” the page reads.

The group opposes current vaccine mandates that require truckers to show proof of vaccination in order to cross the border between the U.S. and Canada.

The American Trucking Associations (ATA), the U.S. trucking industry’s largest trade association, recently urged leaders in Ottawa and Washington to reconsider the cross-border mandates in order to “avoid any further economic disruptions,” according to the Wall Street Journal.

Trucker Brian Von D, an administrator on the Facebook page, announced in a video posted on January 27 that the American convoy will start in California and will head to Washington, D.C. The convoy’s route and start date have not yet been set.

“We’re done with the mandates, we’re done with the government telling us what to do, we will continue, and we will follow just like the rest of the world on these trucker protests, and they will be 100 percent legal, they will abide by the law,” Brian said.

“American, it’s your turn,” Brian continued, “It’s your turn to step up and show what you’re made of.”

Pointing out that the vaccines have proven to be neither safe nor effective, Brian argued that “it is all about control,” and called on Americans to push back against that power grab. “The government overreach is coming to an end, and this is how we do it,” he said.

Facebook and Telegram group “Convoy to DC 2022” has just announced an American trucker convoy protest that will start in California and in end in DC! 🚛⚡️ pic.twitter.com/mxp7TmeM9q

Trucker Brian Brase, another organizer of the US convoy, said their effort is part of a larger movement across the globe that is standing up to government tyranny.

Brase called on all Americans, “everybody and anybody,” regardless of their vaccination status, political affiliations, religious beliefs, and occupation, to be a part of the freedom movement.

“Our convoy needs to be big. We need to make a statement that we will not take it anymore. And we need to hold the line until our Constitutional freedoms are respected,” Brase said.

Brian Brase is one of the organizers of the “Convoy to DC 2022” said American truckers are following Canada’s lead. pic.twitter.com/QPw6ZE2GUe

Tens of thousands of Canadian long-haul truck drivers and their supporters are peacefully encamped in downtown Ottawa in protest of vaccine passports, bringing Canada’s capital city to a standstill. Organizers say they plan to stay there until Prime Minister Justin Trudeau resigns, or they give the people back all of their freedoms and rights.

Meanwhile, scores of Canadian truckers have reportedly blocked the border crossing between Coutts, Alberta and Sweet Grass, Montana over the weekend and into Monday, causing a massive headache for authorities and motorists on both sides of the border.

On Monday afternoon, surrounded by special units of the Royal Canadian Mounted Police, the truckers prayed and decided to open one northbound lane for local traffic and let anyone who wishes to leave do so, but voted to stand their ground. One of them vowed the “only way I’m leaving is in a [police] cruiser.”

Police are “not willing to negotiate,” one of the truckers told the outlet Rebel News, adding that by opening a lane, they were technically complying with a provincial law passed in 2020 to crack down on indigenous rights activists.

According to Coutts Mayor Jim Willett, about 100 trucks were blocking Highway 4 on the Canadian side, causing a miles-long backup on Interstate 15 in Montana. About 50-100 trucks have reportedly been stuck on the US side since Saturday.

The blockade is a protest against US and Canadian governments mandating that truckers must be “fully vaccinated” against Covid-19, which came into effect on January 15.

Alberta Premier Jason Kenney, who is in Washington, DC for a meeting of US governors, denounced the blockade on Sunday as “causing significant inconvenience for lawful motorists” and insisted it “must end immediately.”

On Tuesday, authorities announced that negotiations with the truckers were over, and police were ready to move in.

Update from Chad Williamson, the lawyer on the case.

You can help the truckers in court by funding their defence at https://t.co/HejJhb4xFA pic.twitter.com/t8ydagSoBX

Inspired by the Canadian truckers, Freedom convoys are spreading like wildfire throughout the globe.

Truckers in several other countries, including Australia, Germany, Brazil, and the Netherlands have organized their own convoys to push back against authoritarian COVID measures.

Additionally, a freedom convoy is being planned for all of Europe that will “converge on Brussels” on February 22. 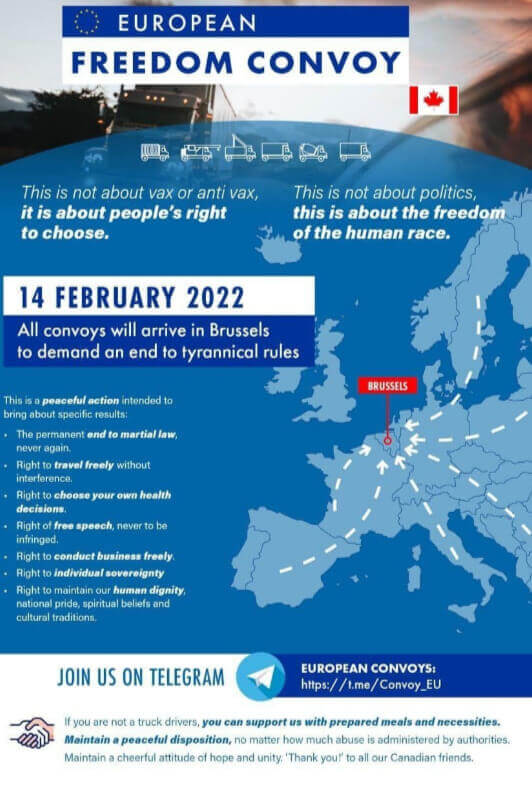 Facebook banned the rapidly growing “Convoy to DC 2022” group from its platform Tuesday night after it had reached 137,000 members, Fox News reported.

Jeremy Johnson, who set up the Facebook group, said his personal account was also removed, prompting him to contact a civil rights attorney to discuss the next steps.

A spokesperson for Facebook’s parent company, Meta, provided this statement to Fox News: “We have removed this group for repeatedly violating our policies around QAnon.” In October 2020, Facebook labeled QAnon a “violence-inducing conspiracy network” and announced group pages and admins tied to QAnon will be removed.

In preparation for this article, American Greatness surveyed the Convoy to DC 2022 Facebook group, and saw nothing related to “QAnon” in any of its postings.

“I have to laugh about that. Can they contact me or something? Can we talk? That’s not true,” he asked on “Fox & Friends” Wednesday. “They actually had offered the administrators to remove content and then request to review again. They didn’t even give that option.”