Jim Crow 2.0 is about two insidious things: voter suppression and election subversion. It’s about making it harder to vote, who gets to count the vote, and whether your vote counts at all.

We have to pass the Freedom to Vote Act and John Lewis Voting Rights Advancement Act.

At his recent press conference last week  about “voting rights,” Biden further dialed up his scurrilous “Jim Crow 2.0” imputations when he asserted the 2022 midterm elections would be “illegitimate” if federal voting legislation is not passed forbidding states from preventing many of the practices—such as a lack of voter ID requirements and legal ballot harvesting—that led to all of the chaos, confusion, and distrust of the 2020 election.

You can always count on leftists to relentlessly accuse you of every nefarious thing that they themselves are doing.

In order to understand what Biden is really talking about, you have to understand that voter suppression and election subversion were what Democrats themselves were up to during the 2020 election, mainly conducted under the auspices of the now-notorious Center for Technology and Civic Life and funded by $350 million of Facebook Founder Mark Zuckerberg’s money.

When the politicians want to obtain your resources, but are reluctant to harm their electoral prospects by raising your taxes, the time honored “work around” is to increase the money supply. If the money supply is $1 and GDP consists of one donut, your $1 is worth one donut. If the government wants half of that donut, they could increase your taxes by 50 percent, thereby leaving you with half a donut.

But if it is not politically expedient to raise taxes, the government can obtain your half a donut anyway, by doubling the money supply to $2. Now the government has $1 and you have $1 but GDP still only consists of one donut. Just like if your taxes were raised, now you only get half of the overall number of donuts and the government gets the other half.

Printing money to finance budget deficits is why current inflation is at a 40-year high, but it also explains the logic of CTCL’s implicit “voter suppression” scheme in 2020.

Democrats could have run a normal campaign for Joe Biden in 2020, persuading voters to vote for the man through campaign appearances and media ads touting his policy positions. But that would not have been politically expedient with a uniquely erratic, discombobulated, and cognitively challenged candidate as Joe Biden.

So the Left took a page out of their economics playbook, and used Mark Zuckerberg’s money to purchase access to key election offices in order to use them to manufacture votes for Joe Biden, each of which would cancel out the legitimate votes of Trump voters in areas where election offices were still operated according to the principle of administrative neutrality and ensuring that only legally valid votes were counted. Here is how it worked:

First, a series of lawsuits by activist lawyers such as Mark Elias—and executive branch use of “emergency police powers” due to COVID-19—radically changed the management of the 2020 election, resulting in different treatment for different kinds of ballots and voters within several states. Absentee ballots and urban voters were favored, in-person voting and any jurisdiction that was not heavily Democratic were not.

Then, the far Left election activists of CTCL arrived on the scene with hundreds of millions of dollars of Mark Zuckerberg’s money, the vast majority of which was funneled into key urban election offices in swing states. But unlike normal campaign finance expenditures, big CTCL money had nothing to do with traditional campaign finance, lobbying, or other expenses that are related to increasingly expensive modern elections.

It had to do with financing the infiltration of election offices at the city and county level by Democratic Party activists, and using those offices as platforms to implement their preferred administrative practices, voting methods, data sharing agreements, and to launch intensive partisan media outreach campaigns.

CTCL provided money, infrastructure and personnel to transform those offices into platforms for aggressively promoting no-ID universal mail-in voting, target likely Democratic voters with a door-to-door get out the vote effort conducted by local election officials, and increasing staffing with paid partisan activists.

In Wisconsin, for example, over 65,000 valid Trump votes in the 66 Wisconsin Counties that did not receive substantial CTCL money were “suppressed” and canceled by manufactured votes in the six CTCL counties. In Texas, it was about 200,000 votes, which was not enough to shift the state blue in 2020, but would have been enough to enable Beto O’Rourke to beat Ted Cruz in the 2018 Texas Senate Race. In Georgia and Pennsylvania, the numbers were likely much higher.

The point is that when people voted for Donald Trump in jurisdictions where election offices were neutral, the quantitative impact on these voters of manufactured votes by CTCL funded election offices was exactly the same as if they had been turned away from the polls by Democratic activists who demanded to see a Democratic Party registration card before they were allowed to enter their polling place.

CTCL grew out the seeds planted in the fever-swamp of leftist election activism known as “RootsCamp 2012.” Since then, CTCL leaders have universally allied themselves with far-Left, subversive causes such as critical race theory, critical l theory, and the “Defund the Police” movement, and have publicly and repeatedly slandered conservatives—and even middle of the road liberals—as irredeemable “fascists” who are an existential threat to Democracy™.

In an article from Mother Jones, Tim Murphy writes of RootsCamp: “The names of the sessions alone tell the story: ‘Unfucking Elections with Data’; ‘Memeification of Rapid Response Social Media Fast & Furious’; ‘How to generate 1000 tweets using segmented email blasts’ . . .” The New Organizing Institute was conceived as “operat[ing] in perpetual election mode grooming Democratic field operatives across the country.”

These carefully groomed “field operatives” include the same people who founded CTCL and determined its supposedly “non partisan” agenda and grant policy during the 2020 election.

On December 2, 2012, Whitney May, Christina Sinclaire, and Tiana Epps-Johnson, who would later go on to found and manage CTCL, were excited to host their very own RootsCamp panel in Conference Room 144c.

May, Sinclaire, and Epps-Johnson’s words suggest an overall disdain for election law, their political opponents, and the norms of election administration, along with their intent to disrupt and subvert the normal election process in order to promote “progressive” ideals.

The goal of these three CTCL founders and directors—to disrupt the electoral system in favor of far-left candidates and progressive causes—eventually came to fruition as a result of CTCL’s $350 million investment in the 2020 election.

On November 6, 2020 as it became increasingly clear that the election was inexplicably slipping away from Donald Trump, Whitney Quesenbery, Executive Director of CTCL, seemed to exult in the knowledge that her organization’s work to increase absentee vote-by-mail had another effect beyond allowing “safer” voting during COVID-19: It was part of a carefully designed plan to defeat Donald Trump and the alleged “fascists” who voted for him.

Quesenbery’s implication that Donald Trump and his supporters are “fascists” appears in a social media post that involves a clever tribute to the folk musicians Woody Guthrie and Pete Seeger, with a replica of Guthrie’s famous slogan affixed to a mailbox rather than to his acoustic guitar:

Homage to Woody and Pete https://t.co/liUPSaeYQU

Vickie Selkow, manager of “Strategic Initiatives and Community Partnerships” for the city of Racine, Wisconsin played a key role in organizing CTCL’s first major grant recipients—the “Wisconsin Five”—and coordinating between their election offices and CTCL officials in July, 2020. She continued in the vein of publicly equating Trump voters with an imaginary “fascist” threat in the United States, echoing the fevered claims of much of the far Left in 2020.

I would give about a gajillion dollars to flip to the end of this super intense & stressful story, “Democracy or Fascism: America’s Choice 2020” to see how this turns out. #VoteBlueToEndTheNightmare #Elections2020

When defeating “fascists” is the objective, subverting an election probably seemed like a small price to pay for CTCL officials and their contacts in key election offices such as Racine’s.

Most noteworthy, given that we are talking about elections, is her endorsement of the idea floated by the king of antiracist hustlers, Ibram X. Kendi, that the entire idea of “legal votes” is illegitimate and should be done away with in the interest of the nebulous goal of “equity.” 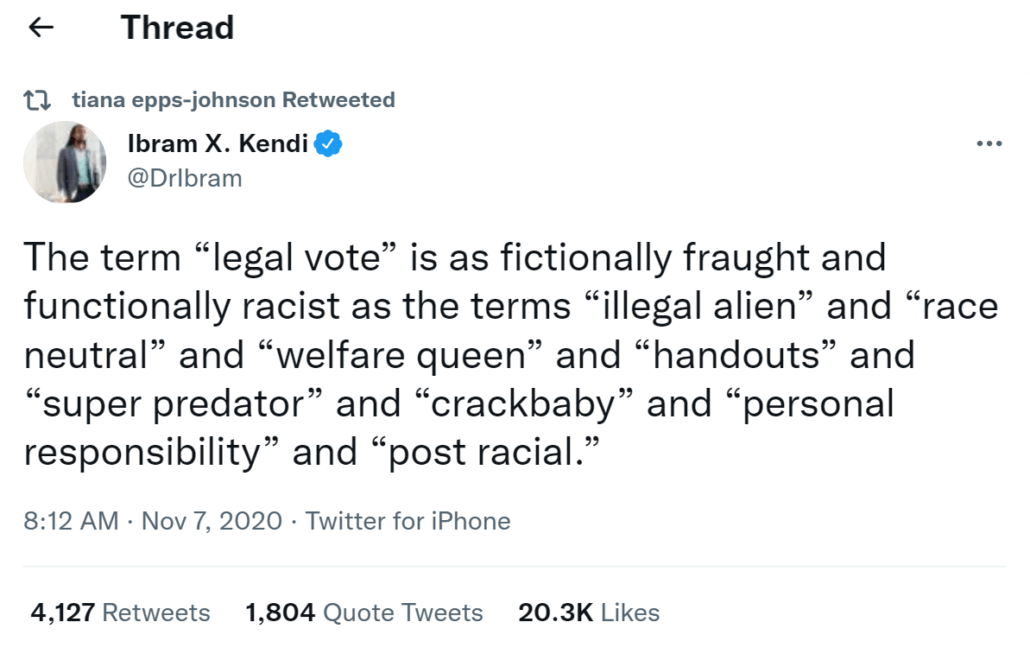 Epps-Johnson also apparently endorses the “defund the police” movement, in its literal, rather than figurative form, suggesting that she also holds the basic institutions of law enforcement in contempt. 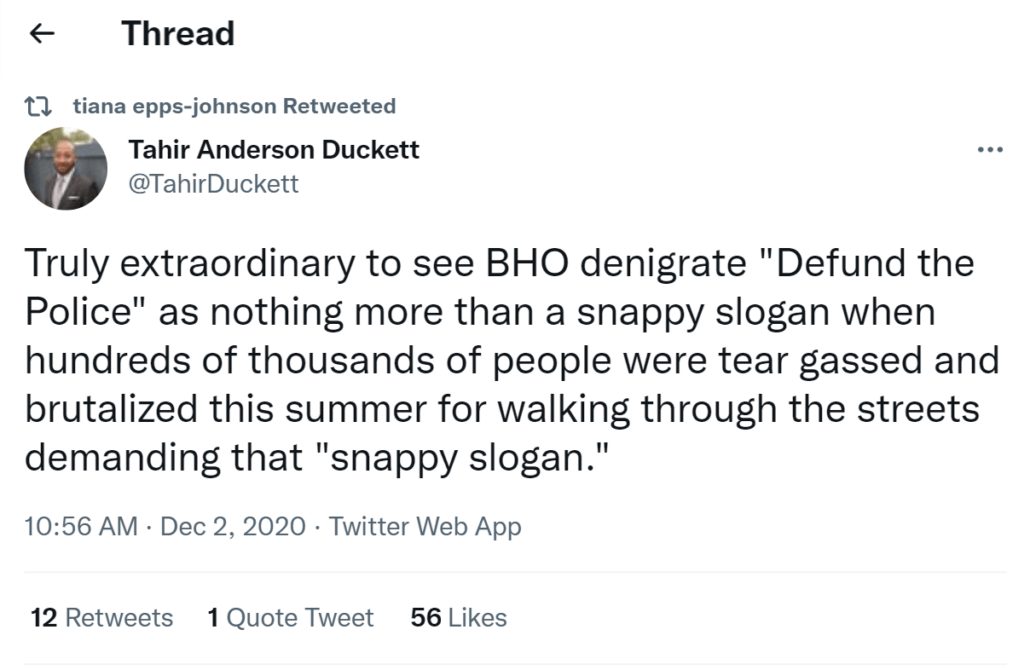 It strains credulity that the ends envisioned by the radicals at CTCL who funded and ran the election offices that were responsible for Joe Biden’s electoral college victory—defeating “racism” and “fascism”—did not justify the deployment of extreme measures that would enable them to achieve their objective.

In 2020, this involved election subversion in its most basic form. Zuckerberg’s millions distributed through CTCL turned key parts of the election system into appendages of the Democratic National Committee, whose major function was to validate the choices of Democratic Party leaders with absentee ballots of questionable and unprovable origin, rather than impartially counting the votes of legal voters.

Make Sure It Doesn’t Happen Again

In my book it’s pretty simple. If you work hard to PREVENT people from voting, you pretty much admit your ideas aren’t popular and you fear the verdict of the people.

As usual, leftists have it backwards. If you are unwilling to adopt even the most basic means to prevent election fraud and illegal election interference, you pretty much admit that your ideas aren’t popular, and that the only way you can win elections is to cheat.

Joe Biden is right in saying that voter suppression and election subversion must be stopped. The problem for Democrats is that they have seen the enemy, but the enemy is themselves.