Doctors across the country are expressing shock and outrage after the Biden regime shut off distribution of monoclonal antibodies, preventing them from treating patients infected with the Delta coronavirus with the life-saving therapeutic.

The Biden administration paused shipments of the monoclonal antibodies because according to the Centers for Disease Control and Prevention (CDC), the treatment isn’t effective against Omicron, which they claim became the dominant strain earlier this month.

However, the CDC has now admits that it seriously miscalculated the prevalence of the Omicron variant in the US, according to the Daily Mail reported, “overblowing the figure by as much as 50 percentage points, sowing confusion as the nation breaks records for new cases.”

The agency released a revised chart on Tuesday showing that the new variant accounted for 23 percent of all COVID-19 cases for the week ending on December 18, as opposed to the 73 percent it originally reported.

The chart showed that the Omicron variant accounted for 59 percent of all new cases for the week ending on December 25, meaning the Delta variant has been accounting for far more infections than the agency initially thought, though Omicron is gaining ground quickly.

While the federal government continues to distribute Sotrovimab, a monoclonal antibody from the company Glaxosmithkline that reportedly does work against Omicron, Ladapo argued that “the federal agencies under your control should not limit our state’s access to any available treatments for Covid-19.”

He said HHS “announced a dramatic reduction in the number of monoclonal antibodies to be allocated to the State of Florida” without providing advanced notice shortly after Florida had treated 100,000 patients with the effective therapeutic.

In conclusion, Ladapo referenced comments Biden made on Monday admitting that there isn’t a federal to end the nearly two-year-old pandemic.

“There is no federal solution. This gets solved at the state level,” Biden said at the time in response to Arkansas Republican Gov. Asa Hutchinson warning the president against letting “federal solutions stand in the way of state solutions.”

“I respectfully request that you allow states and healthcare practitioners to provide treatment options that best benefit the communities they know and serve,” Ladapo wrote. 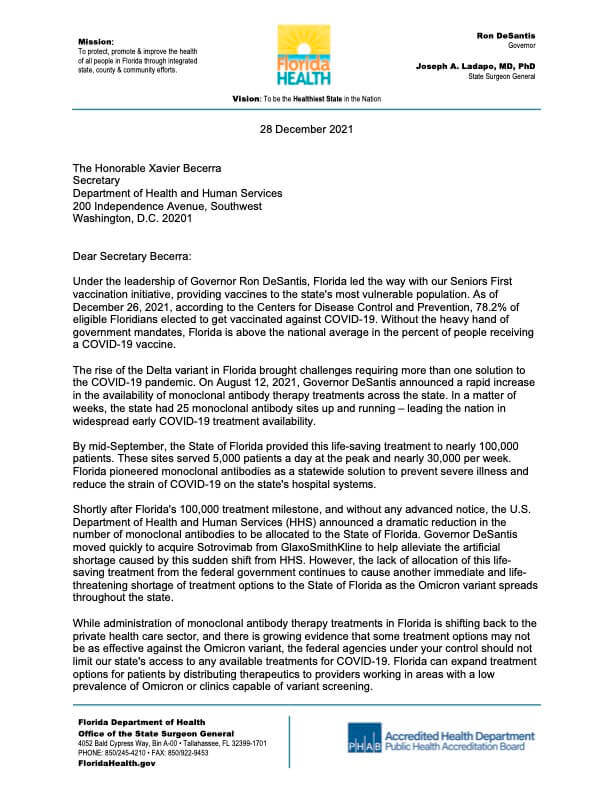 Ladapo, whom DeSantis appointed in September after the former surgeon general resigned, has also made headlines for opposing measures such as school mask mandates.

In September, Florida Gov. Ron DeSantis hammered the Biden administration for overhauling the distribution of monoclonal antibodies in a way that will severely hamper the treatment’s availability in several Republican-controlled states.

The Department of Health and Human Services alarmed authorities in several southern, red states — where the antibodies are widely used — after announcing that the agency would be changing how the COVID-19 treatment is distributed.

Numerous other doctors blasted the Biden administration on social media for withholding distribution of the lifesaving treatment.

“US govt hastily stops monoclonal antibody distribution declaring it ineffective against omicron,” said Dr. James Todaro, an Ophthalmology Specialist from Detroit, on Twitter. “One week later we learn the vast majority of cases are still delta. So we stopped an effective therapy for the more severe variant. They REALLY hate early treatment.”

One week later we learn the vast majority of cases are still delta.

So we stopped an effective therapy for the more severe variant.

“The last 48 hours we hit a record with 27% of our tests coming back positive, tweeted Dr. Mary T. Bowden, an ENT-otolaryngologist in Houston, Texas. “57 people an ENT-otolaryngologist in Houston, Texas.in 2 days who could have been helped by monoclonal antibodies, but since the government has shut off supply, and nothing else is “allowed”, we will just hope they do okay.”

The last 48 hours we hit a record with 27% of our tests coming back positive. 57 people in 2 days who could have been helped by monoclonal antibodies, but since the government has shut off supply, and nothing else is “allowed”, we will just hope they do okay.