Senator Richard Blumenthal(D-Conn.) said he was “excited and proud” to help the Connecticut Communist Party celebrate the 102nd anniversary of the founding of the Communist Party USA over the weekend. 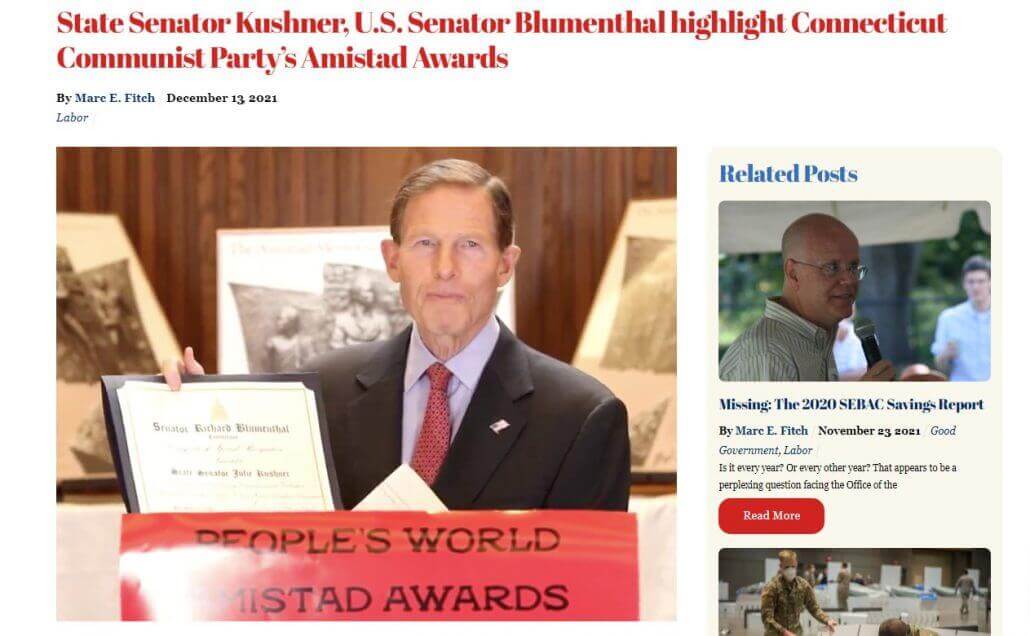 Blumenthal was the surprise guest to help celebrate the occasion, and share his appreciation of the awardees.

“I am really excited and honored to be with you today and share in this remarkable occasion,” Blumenthal gushed after he was introduced.

The awardees were “recognized for their commitment to organizing priorities that address racial equity, climate change, voting rights, and the common good,” said CPWC partners AFT Connecticut in a post about the awards.  “They were also selected for fighting for the rights of essential—and all, regardless of immigrations status—workers during the pandemic.”

Blumenthal stipulated that while one doesn’t have “to agree with anyone and everyone” and every party, he was happy “to honor the great tradition of activism and standing up for individual workers that is represented by the three honorees here.”

The senator had a very high opinion of the three leftists receiving the Communist award.

“I’ve known and worked with all of them. They are extraordinary examples of courage, grace under pressure, ferocious fighting for the rights or working people, and for Democracy,” Blumenthal said.

“I know we’re looking back at past achievements, but I want to tell you that the fight ahead is even more challenging than almost anything we have encountered before because we are at a time when more than any other time in our history, we need to make ‘good trouble’ in the tradition of John Lewis,” he added.

Blumenthal told the attendees that the enemies of Communism (Republicans) are trying to “restrict Democracy.”

“Our opponents are trying to restrict Democracy. They are threatening the right to vote in state after state, congressional district after district all around the country, and the John Lewis Voting rights Act,” he complained. The senator called any restrictions on voting undemocratic, and vowed to fight against them.

“These fights ahead of us go to the core of the lifeblood of our Democracy,” he said, adding that he was “inspired today” (at the Communist event) to redouble his own efforts to abolish the filibuster.”

Blumenthal went on to tout the Build Back Better plan, $15 minimum wage, and the importance of re-electing “Democrats” to Congress.

“There’s a lot to be working for in economic justice, in racial equity, in establishing a $15 minimum wage,” Blumenthal said, “and holding corporations accountable for the basic treatment of the American people. We need to look at our entire tax system, beginning with Build Back Better.”

He thanked his fellow travelers for helping him fight for “an equitable, fair America.”

“The Connecticut Communist Party is headquartered in New Haven and is run by long-time chairwoman Joelle Fishman, who also serves as chair of the CPUSA Political Action Commission,” according to the Yankee Institute.

The Communist Party of the United States of America was established in 1919 after a split in the Socialist Party of America following the Russian Revolution.

As popular as Blumenthal appears to be with the far left, he is widely scorned by patriotic Americans.

Military vets have accused the senator of being guilty of “stolen valor” due to his repeated claims of having served in Vietnam, when he in fact obtained at least five military deferments between 1965 and 1970.

“You should be proud that you shared a uniform with so many brave souls who endured the hardships of war,” fourteen Medal of Honor recipients wrote in a letter to Blumenthal in 2017.  “But instead you chose to attempt to deceitfully and craftily join their ranks with your intentionally vague statements and false claims. Quite simply, it is impossible to “misspeak” about having seen a war.”