A new policy proposal, he said, will “rubberstamp” the “credible fear” loophole that bad actors exploit to run criminal operations in the U.S.

“This is gonna be the biggest change to immigration policy in my lifetime. It’s being done without anybody knowing what’s going on about it and there’s been no coverage for the American people to know what’s going on,” Stevenson said. “There’s no brakes on the car.”

According to the whistleblower, the Director of USCIS sent out an email notifying employees about a rule change that will shift the adjudicative authority of defensive asylum away from immigration judges to USCIS asylum.

Ur Jaddou, Director of U.S. Citizenship and Immigration Services wrote in the email:

The proposed system seeks to reduce processing times by transferring the initial responsibility for adjudicating certain protection claims from immigration judges to USCIS asylum officers. This rule would simplify the adjudication process for certain individuals who are encountered at or near the border, placed into expedited removal proceedings, and determined to have a credible fear of persecution or torture. 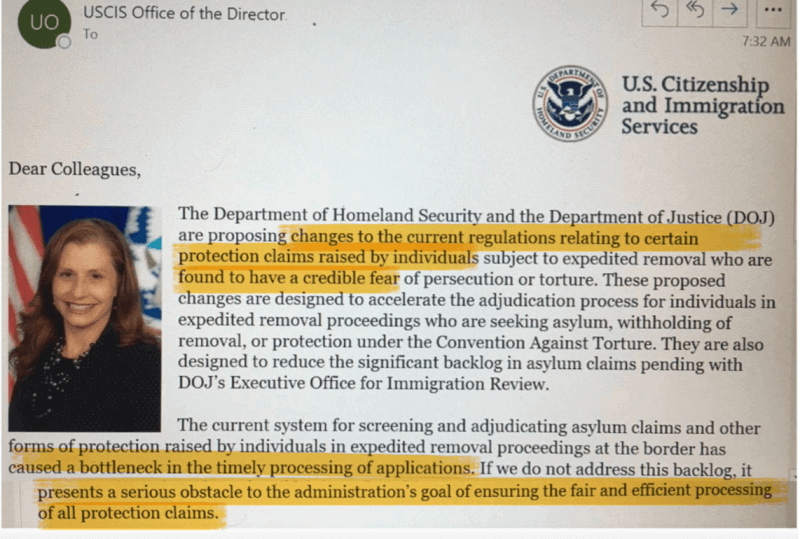 “If the asylum officers get this ability, I will say it’s going to be a rubber stamp of immediately getting ‘credible fear’ or ‘reasonable fear’ [asylum seekers] to be able to stay in the country if they’re going to be deported…also their path to citizenship,” Stevenson said. All criminal aliens have to do is lie about having a “credible fear” of being mistreated in their home country, and United States will take them at their word.

He said that the new shift in policy enables the unaccountable USCIS to adjudicate these asylum claims rather than immigration judges. Known child traffickers, Stevenson said, exploit this loophole to stay in the country.

“USCIS is fee-funded. All of its operations, all of its cover, overhead, everything is based on the fees filed by aliens,” he explained.

“That leaves very little accountability to the public when this kind of operation exists. And when you couple that with giving adjudicative authority away from an immigration judge to an asylum officer, you’re removing any type of public pressure that they could apply on policies they’re creating,” he added.

Stevenson told O’Keefe that the new policy shift is “going to be a rubber stamp of immediately getting ‘credible fear’ or ‘reasonable fear’ to be able to say in the country” and get immediately processed for defensive asylum.

“That’s going to exist very quickly. Also, their path to citizenship, within a year of getting defensive asylum, they can adjust their status to a lawful current resident (LCR). Three years from there, they can apply to be naturalized to a U.S. citizen,” he said.

“So, it’s fast-tracking, and that’s the only thing that this looking to consider in the actual rule proposal. It’s looking to make it quicker. That’s it. They don’t want to backlog. It’s not over until the alien wins.”

Stevenson initially came to Project Veritas anonymously in August to blow the whistle on these “reasonable fear” loopholes that allow sex traffickers and other violent criminals to operate in the United States.

When asked what he thought would happen to him now that he’s gone public, the whistleblower replied, “I will lose my job.”

“Are you afraid of that?” O’Keefe asked.

Stevenson replied: “No, because I think this is more urgent for people to realize — because this policy change is going to continue to drive in any alien that they [federal government] deem fit. This will drive a massive swing in immigration law.”

“This is going to be the biggest change to immigration policy in my lifetime. It’s being done without anybody knowing” – Aaron Stevenson#ExposeDHS pic.twitter.com/gVHvlmy85b