Two explosions were reported in Kabul, Afghanistan, Thursday, killing at least 70 people, and injuring dozens more, including multiple Marines, eleven of whom have died. (See update below for the latest on casualties).

A suicide bomb reportedly detonated outside the Hamid Karzai International Airport (HKIA), and another bomb went off at the nearby Baron Hotel, where Americans have been gathering for rescue and evacuation.

According to reports, U.S. forces exchanged fire with gunmen outside near the “Abbey” gate, where evacuees have gathered in large numbers in recent days.

U.S. officials confirmed to FOX News that at least three U.S. Marines were among those hurt, one of them seriously. U.S. casualty numbers are expected to increase.

Joe Biden last week vowed that “any attack” on American forces or disruption of its operations at the Kabul airport would be met with “a swift and forceful response.”

“We made clear to the Taliban that any attack, any attack on our forces or disruption of our operations at the airport will be met with a swift and forceful response,” Biden told reporters at a White House news conference.

Several countries, including the United States, urged people to avoid the airport earlier in the day, due to an undefined security threat.

A U.S. Embassy in Kabul said in an alert: “U.S. citizens who are at the Abbey Gate, East Gate, or North Gate now should leave immediately.”

Secretary of State Antony Blinken on Wednesday said that as many as 1,500 Americans may still be in the country.

“We can confirm an explosion outside Kabul airport. Casualties are unclear at this time,” Pentagon spokesman John Kirby tweeted.

“We will provide additional details when we can.”

We can confirm that the explosion near the Abbey Gate of the Kabul airport has resulted in an unknown number of casualties. We will continue to update.

Thousands of people have gathered outside the airport in recent days hoping to get aboard evacuation flights being conducted by the U.S. military ahead of its withdrawal from the country on Aug. 31.

The thousands of people still stranded in Afghanistan have been told to stay away from the Kabul airport due to the ongoing terrorist threat.

Earlier this week, White House Press Secretary insisted that the administration’s evacuation efforts can not be called “anything but a success.”

Biden claimed on August 20 that al-Qaeda has been wiped out in Afghanistan, and no longer posed a threat to the nation.

‘What interest do we have in Afghanistan at this point with al Qaeda gone? We went to Afghanistan for the express purpose of getting rid of al Qaeda in Afghanistan, as well as — as well as getting Osama bin Laden. And we did,” Biden said during a news conference.

Pentagon press secretary John Kirby, shortly thereafter disputed his claim al-Qaeda had no presence in Afghanistan, saying: “We know that Al-Qaeda is a presence…in Afghanistan.”   ‘We don’t have an exact figure [of how many members].

Biden later downplayed the terrorist threat in an interview with ABC News host George Stephanopoulos, telling him that al-Qaeda was a bigger threat in Syria and East Africa than in Afghanistan.

At least 13 dead, 60 injured in the explosions, according to reports.

Via the Wall Street Journal: “The U.S. ambassador in Kabul has told staff there that four U.S. Marines were killed in an explosion at the city’s airport and three wounded, a U.S. official with knowledge of the briefing said.”

"The U.S. ambassador in Kabul has told staff there that four U.S. Marines were killed in an explosion at the city’s airport and three wounded, a U.S. official with knowledge of the briefing said."https://t.co/pebQyx1fZL

Fox News is reporting that at 11 Marines and one Navy medic were killed. In a briefing from the Pentagon, Thursday afternoon, Gen. Kenneth McKenzie Jr. stated that the attacks today were perpetrated by ISIS.

The last US casualty in Afghanistan before today was February of 2020.

Additional blasts have been reported in Kabul, and more are expected tonight.

#BREAKING
⚡Another blast reported in #Kabul.

There were increased calls from Republicans throughout the day for Biden to come out and address the situation.

Fox News: “5 hours of silence from the Commander-in-chief."

Where is Joe Biden? pic.twitter.com/GFtHldo1JU

Joe Biden needs to either address the country and take questions from every single journalist from the press corp or resign.

Resigning might be simpler for everyone at this point. https://t.co/NU4RLGbexW

Joe Biden is not hiding at his vacation house.

President Biden has to give a speech in response to today’s tragic events, has to answer direct questions.

Baseline expectation of any US President.

Where is Joe Biden?

It has been over 4 hours, and we have heard nothing from Joe Biden.

Americans have been killed in an act of terror – we need to hear from the President of the United States. This is on him.

Biden will reportedly speak to the nation at 5:00 ET. 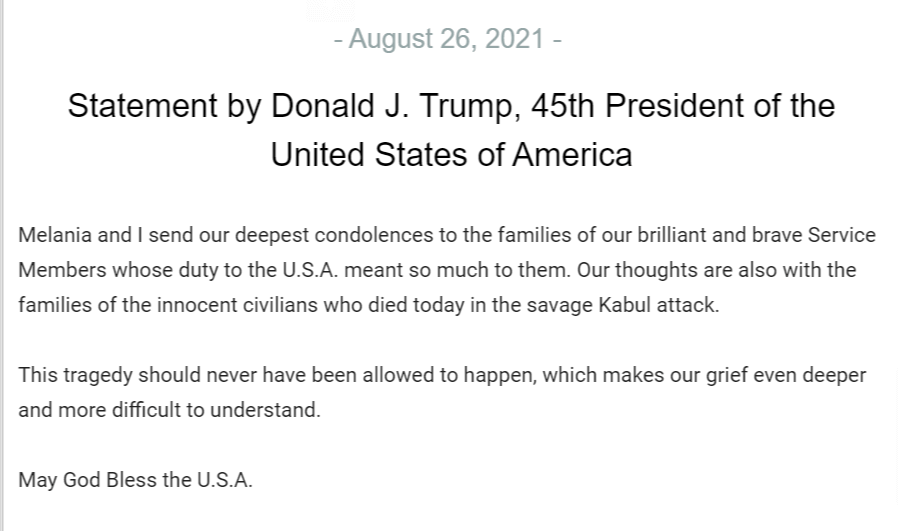 Senator Josh Hawley (R-Mo.) called on Biden to resign, saying he is responsible for the carnage, and is unfit to lead.

To say that today’s loss of American lives in Kabul is sickening does not begin to do justice to what has happened. It is enraging. And Joe Biden is responsible. It is now clear beyond all doubt that he has neither the capacity nor the will to lead. He must resign

Fox News is now reporting that 13 American servicemen perished in the terrorist attack.

Trump releases statement to the American people on the tragedy in Afghanistan today pic.twitter.com/DPBIvwhsrm