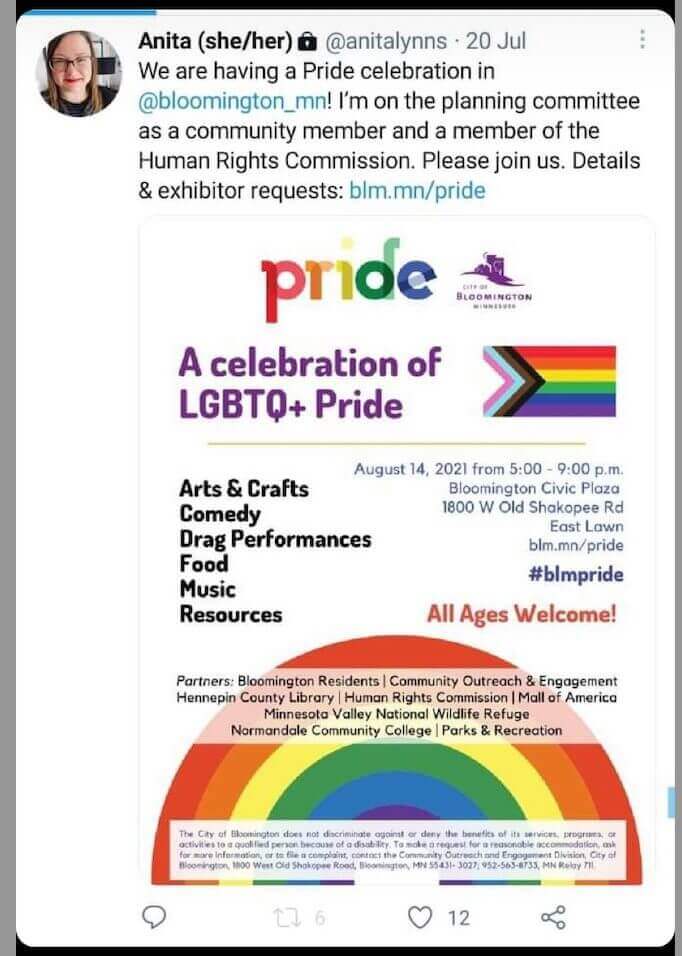 “This man posts videos of himself having sex with ‘younger brother’ on the internet. He has incest fantasies. That’s illegal in the state of Minnesota,” said Becky Strohmeier, the leader of the Bloomington Patriots group at a Bloomington City Council meeting last week. “It’s absolutely disgraceful that nobody did their due diligence on this.”

Bloomington City Manager Jamie Verbrugge said Thursday that the city has decided “to not have that individual among the performers at the Pride event.”

“The city became aware of allegations this past Monday that one of the performers booked for the Pride event has a social media presence that includes explicit material. The city took time to independently verify that the allegation was factual,” Verbrugge said.

Drag queen, Martina Marraccino, was originally scheduled to perform  a “story hour and show” at the “all ages welcome!” event on August 14, according to Alpha News. 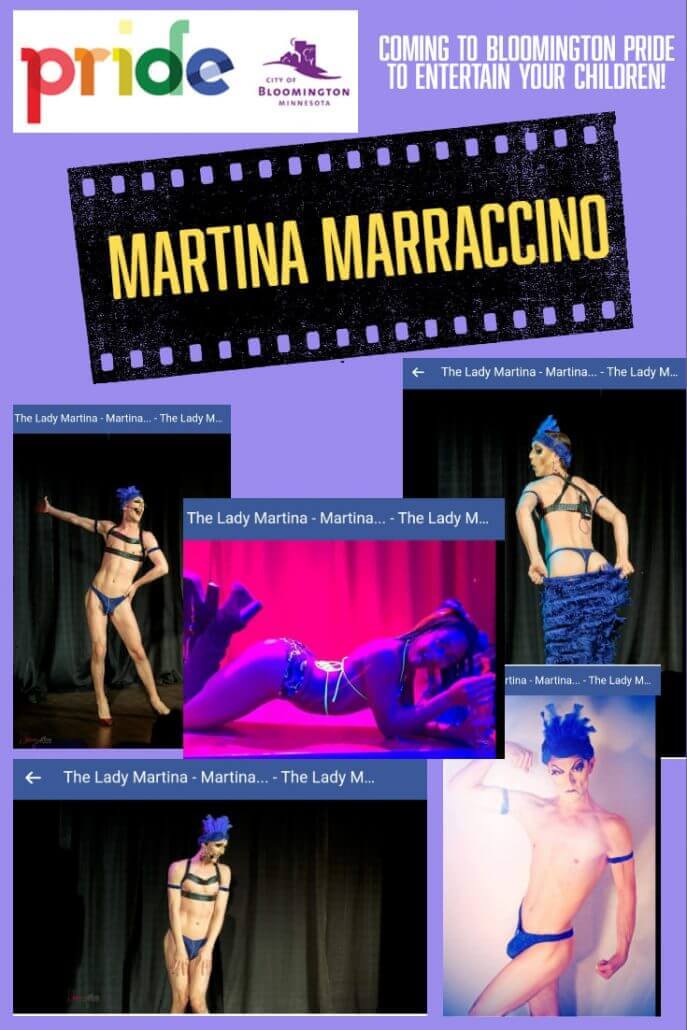 The would-be children’s story hour performer asked his friends on Facebook last month to donate to The Satanic Temple for his birthday.  He followed that up with a “Hail Satan” post, Alpha News reported. 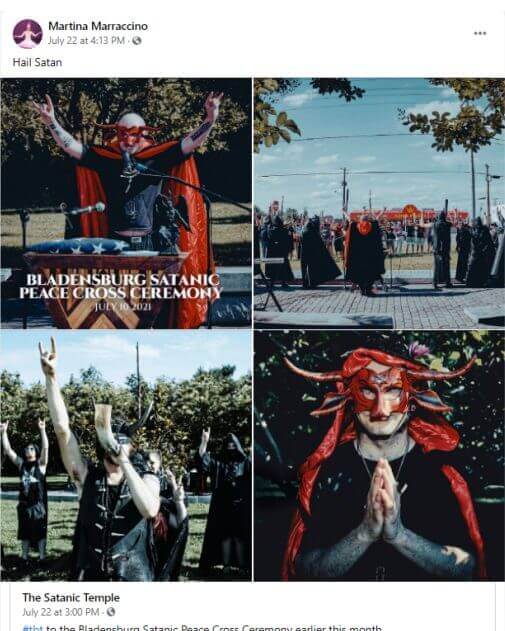 “It’s very clear by his physical appearance that they are the same,” Strohmeier added, noting that Marraccino didn’t deny that Divine was him when he commented on a Bloomington Patriots post about the pornography.

Marraccino responded to her by mocking her Christian faith.

“This is childish and I’m not bothered. Your children crave love and acceptance, you seem to only have room for hate. That’s sad for them, and for you. Jesus would be ashamed of you.”

Strohmeier claimed that Marraccino has uploaded dozens of pornographic videos to XTube, with words like “incest” and “brother” often appearing in the title.

“He also advertises an OnlyFans page where he uploads and sells pornography of himself,” she said.

Strohmeier and her group emailed their local elected officials to express their concerns and heard back from Hennepin County Commissioner Marion Greene, who said she knows Marraccino and could guarantee that he “in no way promotes Satanism and/or sex with minors.”

Yet on July 24, Marraccino seemed to promote Satanism by posting a Satanic Temple message celebrating the anniversary of the installation of a statue of the occultist symbol Baphomet in Detroit.

“Join us tomorrow for a celebration of religious plurality and the shedding of archaic superstition,” the post reads.

In 2015, we unveiled the statue of Baphomet in Detroit. The statue was offered to the states of Oklahoma and Arkansas to stand alongside preexisting Ten Commandments monuments on public grounds, and now it stands in TST’s International Headquarters in Salem, MA. Join us as we celebrate our achievements, and Hail Satan! 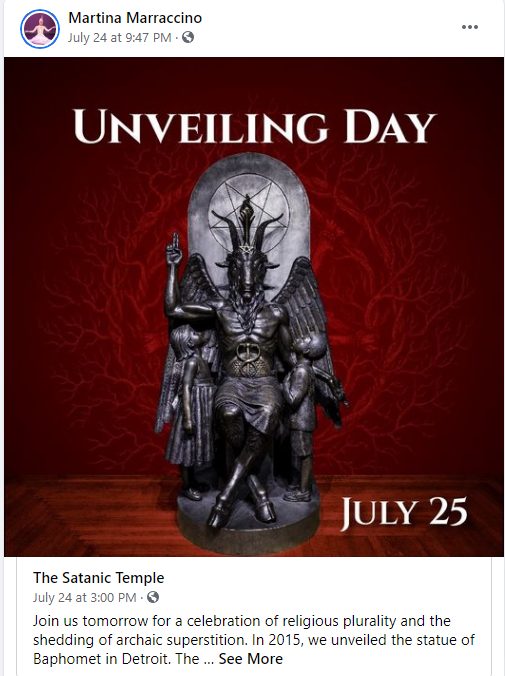 Lucien Greaves, the founder of the Satanic Temple, claims not to believe in a supernatural Satan, but instead uses “the literary Satan as a metaphor to promote pragmatic skepticism, rational reciprocity, personal autonomy, and curiosity.”

Be that as it may, many Satanic Temple adherents appear to be true believers.

In a post in response to the Bloomington Patriot group’s allegations, Marraccino referred to his involvement with the Satanic Temple as “his religious beliefs.”

“It’s not the first time that I’ve been persecuted for my identity and religious beliefs, and I’m sure not the last,” he said. “I am exactly who I want and intend to be, your disapproval tastes like honey.”

Jamie Verbrugge, the Bloomington City Manager blamed the poor decision-making on an outside “event planner/producer who was unaware of the social media content related to the performer.”

“I’m disappointed this happened. It was an entirely avoidable error that put Bloomington in a bad light, and it distracted attention away from the goal of hosting a fun, inclusive, and welcoming community event,” added Bloomington Mayor Tim Busse.

Marraccino appeared to take the rejection in stride on Facebook.

“See you all this Saturday! I may not be performing but I’ll still be there exercising my rights and my religious freedom,” he said. “Please come out and support this event in the face of their attempts to invalidate us.”