Nobody likes a whiner, right? The Navy was explicit about where I could go to look for sympathy: between shit and syphilis in the dictionary.

This is why I’ve delayed responding to the insightful March 4 kickoff of Chris Buskirk’s Vital Signs newsletter, “So You Want to Win Elections?” The essay spoke to me in a personal way, and I hope my reaction has general relevance.

“Things stopped working in this country about 50 years ago,” Buskirk writes. . . . I like to date the beginning of the decay to the summer of 1969.”

“On the night of August 8, the Manson Family broke into Roman Polanski’s Hollywood Hills home and murdered his pregnant wife, Sharon Tate, their unborn baby, and three friends who were in the house.” 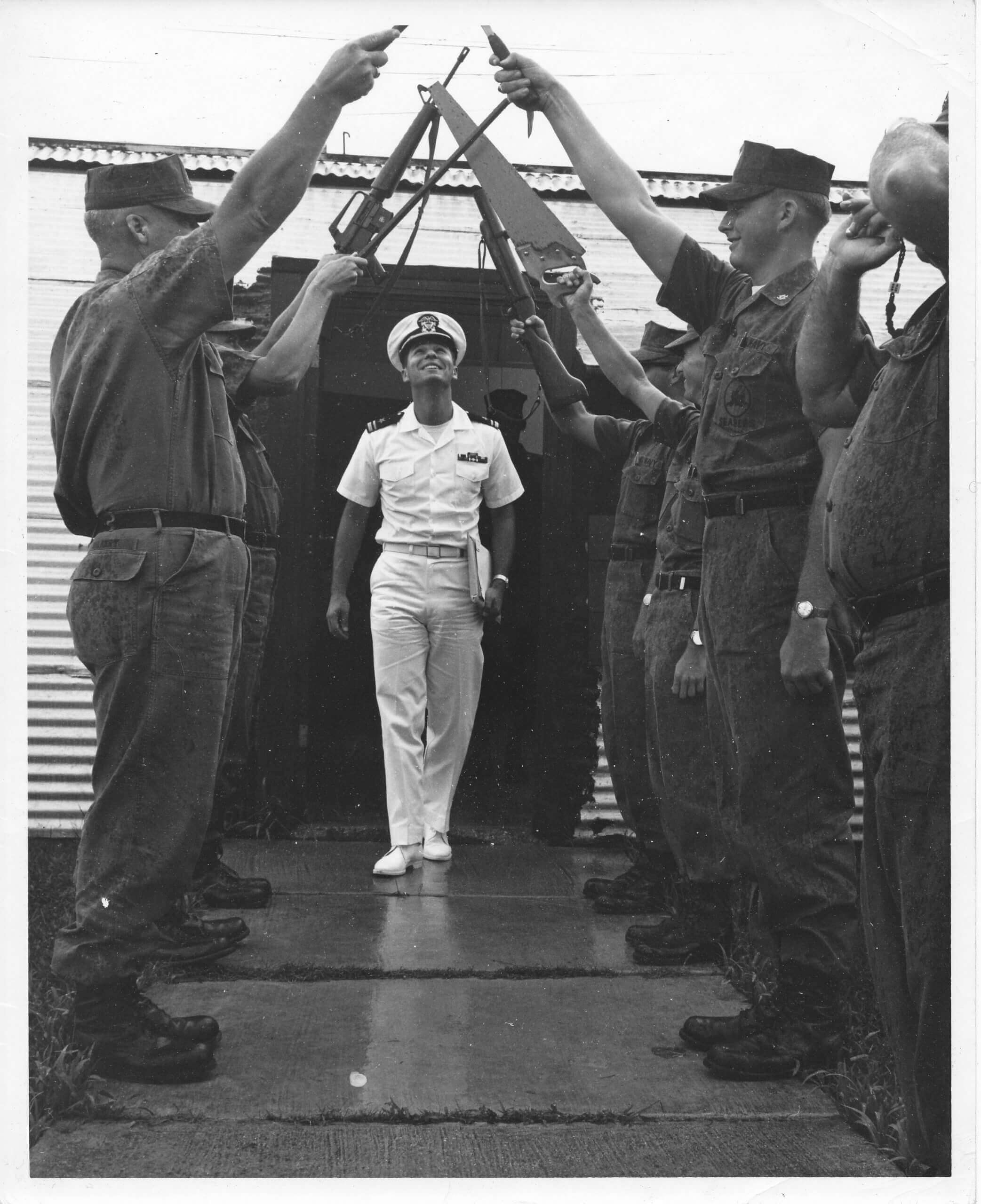 See the happy guy in the white suit, above? I’m leaving Camp Kinser, Okinawa, on my way “home” to the United States and separation from active duty. I was filled with hope and optimism after more than three years away, most of that time in Vietnam.

I expected to marry, have children, support my family with a good job, maybe buy a starter house with a VA loan, and be a respected member of the community. In short, I wanted to be just like my parents.

As near as I can figure, the Manson murders were taking place just about the time the photo was snapped. I flew across the Pacific and landed at Travis Air Force Base, California. The first thing I remember seeing after deplaning was a newspaper kiosk with headlines screaming of the Manson murders. Of course, no one then knew the identity of the killers, which made things even more creepy.

I felt a cold sickness in my stomach. What had I come home to? Sure, bad things had happened before. But something seemed different about this, and it’s been emblematic for me ever since. I drew the conclusion that my country had mutated, and this crime was something indicative of that transformation.

A lot changed after the summer of 1969, Buskirk writes. “In the early 1970s, the median real wages of American workers entered a period of extended stagnation characterized by exceptionally low growth which made it impossible for the average person to get ahead. It’s still true today, which is why so many families require two incomes if they want to stay in the middle class.”

I returned to my hometown of Buffalo, New York, expecting to build a life, considering myself eminently employable. After all, I was a college graduate and an honorably separated war veteran. But the country and the culture had deteriorated, and the economy had stalled. The boom of the late 1940s that had greeted World War II veterans, driven by tremendous pent-up consumer demand, was nowhere to be found.

Things were slow. I didn’t seem to be in much demand at all on the job market. And my Vietnam service was more of a detriment than an asset. But in America, education was always the key to advancement, right? It had been for my father. So in January, 1970, I enrolled in graduate school at SUNY Buffalo. Later I would realize that grad school is the snooze button on the alarm clock of life.

I had received a series of slow-motion “Dear John” letters while in basic training. Now, at 26, I considered myself overdue for marriage. What better place than the university to look for a wife? But by 1970, men like me were out of fashion. Without getting into detail, things didn’t work out.

Buskirk writes that the period of economic stagnation that began in the early 1970s “either causes or exacerbates a lot of other problems in our country. People who are economically precarious change their behavior: they delay getting married or don’t marry at all, they have fewer or no children than they would like, they may become lonely, isolated, and depressed.”

His policy proposal? “Advocate an agenda to remake America that makes it possible for the average person to get married, buy a house, have a few kids, and send them to school on a single wage.”

Both the Left and the Right stand in the way of this agenda, Buskirk writes. The Left’s obsession with what it perceives as justice “tends to be accompanied, and perhaps preceded, by a sense of divine mission [which] often manifests itself first in preening, then in hectoring, and eventually in self-righteous cruelty. In other words, . . . with seeing justice done to or upon others.” Leftists also see themselves as judges—God’s avenging angels.

The Right, on the other hand, is focused on freedom. This includes a fetishization of free trade that is blind or coldly indifferent to empty factories, boarded-up businesses, and pill mills. And, I would add for the benefit of “family values” conservatives, divorce, depression, mental illness, hopelessness, alcoholism, drug abuse, obesity, deferred medical and dental care, suicide, ennui, and general anomie.

Buskirk believes it would be difficult but not impossible to stop America’s long slide and restore national vitality in an age of decay. But two full generations have reached maturity since the summer of 1969. Most Americans have no memory of what we’ve lost. Decline is normal to them.

Let’s see what practical and realistic proposals Buskirk comes up with. In any case, recovery is impossible without a correct diagnosis. We went off the rails in 1969, and few people alive today even know it.