James Flynn’s last book is covered with a graphic of his own design: a cruise missile labeled “speech code” is streaking towards an academic building. Academia is hoisted by its own petard. An institution that is supposed to be selling ideas destroys itself with censorship, cancellation, and dogma.

That wasn’t the graphic chosen for the book’s initial design. Ironically, Flynn’s study of academic threats to free speech was canceled in June 2019, within weeks of its scheduled publication. The publisher’s letter to the author alleged possible violations of British criminal laws against hate speech and incitement of racial hatred. An American publisher got it released within months, prefaced with Emerald Press’s ridiculous letter, without any legal trouble.

Flynn’s findings of genetic diversity in intelligence attracted woke ire. Part of Flynn’s “radical reform” of the university would include making the facts of genetic diversity a requirement in undergraduate education. He prescribed grade deflation, fewer admissions, more vocational alternatives, and more hard scientific requirements before students would be allowed to declare in the humanities and social sciences. His book doesn’t predict the end of higher education without reform, but, according to his publisher, Paul du Quenoy, that’s only because “he was too nice.”

Flynn died a year after the book’s publication. In a memorial discussion, the panelists all agreed that “the future of academia is at the very least highly uncertain and at the most really quite dire,” as du Quenoy put it.

Charles Murray (celebrated and vilified for proving that cognitive intelligence predicts socioeconomic outcomes better than so-called privileges) was most optimistic. “At some point,” he said, “you are going to have these very weak social science departments, with very mediocre people, saying very foolish things. At some time, the scorn of the grown-ups, who are still doing serious work, is going to become impossible to ignore.” 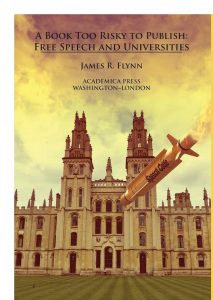 University of Pennsylvania law professor Amy Wax, who faced her own near-cancellation after blaming disadvantages on the denigration of “bourgeois culture,” hopes that Murray is right, but she’s pessimistic. “The number of people who care about getting the facts right and getting at the truth in academia is dwindling by the day,” she said. “That is not what it’s about anymore. It’s about peddling and selling and spreading an ideology.”

Even if faculty want to maintain standards, the institution enables the favored demographics (females and anybody of color) to ignore them.

Although Murray is optimistic in the long run, he foresees Western universities declining behind China’s woke-free competitors in the short run. And the “short run” could last years.

“We are looking at a decade that will probably decide whether the university as we know it—as we have known it historically—is going to evolve into one in which you have a serious university, which consists of the arts, [hard] sciences, and a collection of additional faculty members who have no real relevance to any important questions; or whether you are going to see the social sciences suck it up, and incorporate biology into their analysis,” Murray said.

Murray identifies biology as the discipline that should ground the social sciences, given that they focus on human issues. Biology is a hard science, although even biology is in danger of being captured by the woke. This is best illustrated in medicine. In 2008, the Medical College Admissions Test (MCAT) added a question about the wage gap between men and women, to which the correct answer is “sexism” (the other options being: bigotry, racism, biological differences). Another question is about the “lack” of African American and Latinx university faculty, for which the correct answer is institutional racism (the other options being: symbolic racism, hidden racism, personal bias).

This was before the viral campaign in 2020 to #defundscience, sponsored primarily by Black Lives Matter. A survey published last fall found that a quarter of college students are afraid to discuss BLM. Meanwhile, 62 percent agree that “the climate on their campus prevents students from saying things they believe,” up from 55 percent in 2019.

Stilted free speech means a stilted education. Flynn’s book contains an acid description of university students “whose minds are more akin to those of the late nineteenth century than to those conditioned by the rise of the scientific ethos over the last 150 years.”

Woke students seem fine with this. Yet they also seem blind to its counterproductivity. For instance, gendered messaging discourages women from taking the most valuable degrees, where they have been told the patriarchy is stacked against them. Instead, they are encouraged into useless degrees, where they can feel empowered.

Wax memorably complains that admissions officers have students and parents “by the balls.” The ranking of the university relates to the ranking of the employers who will recruit there. The actual education matters little.

Murray agrees that employers prefer to recruit at Harvard not because Harvard gives a great education but because the students were likely brilliant in the first place.

Murray, optimistically, wonders whether universities “may solve this for us.” If brilliant students looked for useful education instead of high ranking, Harvard’s brand would collapse.

Any Room for Freedom Over Fashion?

Wax “hopes” Murray is right. But she points out that Harvard doesn’t depend on student tuition and fees. Wax urges private donors to stop endowing the Ivy League (even though she works in it). Insulated from the market, elite colleges are enabled to put ideology before education.

Wax told me of “a trend already underway” for elite institutions “to debase their brand by undermining meritocratic selection and promotion among students and faculty.  Of course, that won’t do much for changing their tilted ideology—that pressure will have to come from students, parents, and outside organizations, and will require more courage, conviction, and concerted action than they seem to be able to muster in the current climate of ‘woke’ ideology and intimidation.”

That pressure is not coming from the mainstream media or (since the election) from government. The newspapers and journals that rank universities are really ranking wokeness. The usual way to achieve this is simply to survey academics on what they think the best universities are. Since most academics are woke, the survey is confirmation bias. Add in some questions about diversity, inclusivity, etc., and your job is done.

Thus incentivized, universities go out of their way to signal wokeness: affirmative action, mandatory training in unconscious biases, endless tweeting about social justice, requiring new students and staff to sign up to woke values, firing anybody who questions the consensus.

Reform has many challenges, even after considering the ethics of intervention. The panelists agree on the need to restore the sciences, and that restoring the sciences involves restoring Western culture. Since the woke believe the West is systemically racist, and science is a Western construct, they oppose both.

Charles Murray wittily describes The Bell Curve as his “most abused child,” and describes Human Accomplishment (a defense of Western exceptionalism) as his “most neglected child.”

These metaphors are useful at a higher level: woke universities are abusing students; non-woke students are neglected. The non-woke need alternatives. Some rare colleges buck the trend—Hillsdale College in Michigan, and the College of the Ozarks in Missouri, for instance. Yet their circumstances are rare: antique heritage, fully private, no dependence on public funds, well-endowed.

Why doesn’t somebody found a new university committed to free ideas and opposed to woke fashions? Well, Stephen J. Blackwood, a Canadian-American philosopher, is halfway there. He constituted Ralston College in Georgia with a commitment to freedom of speech, although it doesn’t have any faculty or students yet.

Setting up new colleges is not easy. But market differentiation offers rewards. Otherwise, non-woke talent will go to non-woke universities abroad, taking much of this country’s talent and good sense with them.