While every town and hamlet probably sees itself as the “real” America, traditionally speaking there may be no city and state more American than New York. It was the first hub of the young nation and its capital from 1785-1790. Since 1790, New York City has been the most populous in the country, while Los Angeles and Chicago traded the next two spots throughout most of the 20th century.

Unfortunately, growth has given way to bloat. Starting in the 1970s, New York’s population began to stagnate and then decrease. Much of this trend can be attributed to the lax law enforcement practices and precarious financial administration policies under a string of mayors beginning with John Lindsay in the late 1960s and ending with the resurgence of the city under Rudy Giuliani after 1994.

But the current administrations of both the city under Mayor Bill de Blasio and the state under Governor Andrew Cuomo are yet another regression. Well before the COVID-19 pandemic hit, both executives were leading New York into a ditch with their ineptitude and mutual dislike for each other. In 2020, Cuomo became the media’s darling for his daily press briefings and constant appearances on TV. 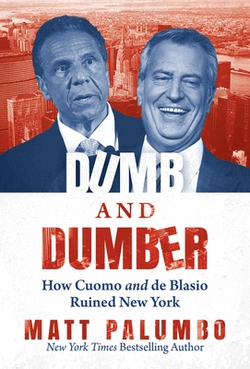 But it appears their stars are beginning to fall, despite all attempts by national media to bolster them. De Blasio is term-limited and loathed by city residents for the decline of safety and sanitation standards, while Cuomo is besieged by probes into his order to place elderly COVID-19 patients into nursing homes and a daily, growing string of #MeToo sexual harassment allegations by former aides and female acquaintances.

Matt Palumbo is an author and fact-checker with the Bongino Report. I caught up with him recently for a chat about his new book, Dumb and Dumber: How Cuomo and de Blasio Ruined New York. Given the parade of ill-tidings about Cuomo and de Blasio, Palumbo may need to put out a new edition much sooner than he anticipated.

The interview has been edited for length and clarity.

Ray McCoy: You begin the book’s first section on New York’s handling of the pandemic by highlighting how Bill de Blasio’s initial response to COVID-19 was incompetent to the point that it stood out even compared to a liberal counterpart like San Francisco Mayor London Breed. Do you think that, as with Governor Cuomo of late, there will be revelations that the mayor’s office concealed what it knew or didn’t know about the threat of the virus throughout February and March 2020? What is the likelihood that he will face consequences and a real investigation?

Matt Polumbo: There’s no reason, or nothing at least to lead you to believe, de Blasio had any intel that would tell him otherwise and you know, obviously that would be a tremendously stupid thing to go and tell people to go out to Chinatown during a pandemic that originated in China at that time [early during the crisis].

But then again, it was a dumb thing to do even without that intel. It’s just kind of common sense that you—at a minimum—want to avoid large gatherings. And while we’re obviously no fan of lockdowns and these onerous regulations, there are certain little things you should do to be cautious or reduce your risk. One of them is not to deliberately go out during celebrations like that of course. All those rules were implemented after that, and then went out the door again during the Black Lives Matter protests and seemed to have conveniently been forgotten.

RM: You invoked Andrew Cuomo’s fawning interview by Savannah Guthrie as an example of the type of flattering press coverage that allowed him to conceal his pernicious role in aggravating the death tolls by housing elderly COVID patients in nursing homes. But even then New Yorkers themselves were discussing that foul-up. Could the media smokescreen have been part of an effort to avoid lockdown protests in Albany of the type that happened to Gretchen Whitmer in Michigan?

MP: With the emphasis now on Cuomo’s nursing home scandal, which came out of nowhere, it seems we’ve known about this as it was happening and all of a sudden in the past two months everyone cares and there’s another AG report. It almost feels like everyone’s trying to call him a scapegoat now because it was almost all Democrats who implemented these kinds of policies. And it wasn’t just him. Our governor in New Jersey did it, Whitmer did it as well as a few others. And it almost feels like they’re trying to take away attention from the rest of them and pin it on Cuomo. As for the why the media played cover for him, I think it was more of a contrasting of narratives: That Trump was doing nothing and we were the worst nationwide at combating this thing and none of our citizens were taking it seriously and all that; and then they kind of use Cuomo as a counter-narrative as an example of someone doing everything right.

RM: The second part of the book deals more with the mismanagement of the taxation and administration of New York by Cuomo and de Blasio. As you pointed out on page 70, Upstate New York has technically never recovered from the job losses and blight caused by the Great Recession. Indeed, there have been proposals at various junctures to split up New York into two or even three states between Upstate, New York City, and Long Island. Now that such separatist movements have gained steam in western states like Oregon, what do you think are the chances of it happening in New York?

MP: That’s the thing. I don’t know if it’ll actually ever happen in this country, but I actually do think it would be one way of healing the national divide. Like everyone’s always talking about secession or people forming their own enclaves. It will never work. Even in a deep red state there are still going to be areas where there are a lot of Democrats, and even in California, there are Republican havens. So breaking up individual states to make them a liberal mecca or a right-wing mecca I don’t think would work. But, you know there is an obvious urban-rural divide. If you look at most presidential elections and how Illinois votes, it’s usually every single county except where Chicago is located votes Republican. And then only Chicago is Democratic and that’s enough to make it a blue state. If you broke that up and you had more of a city-state model I think it would work. But will that actually ever happen? I, unfortunately, don’t think so.

RM: As of today six women have now accused Governor Cuomo of varying degrees of inappropriate sexual behavior. I find it important to remember that in 2018, he was challenged in the New York primary by actress Cynthia Nixon, and the overwhelming majority of Democrats voted for Cuomo in what was seen as a battle between two different bases of the party. In some ways de Blasio is a symbol of the #woke side and Cuomo of the old-school machine Democrats. Do you think if Cuomo succumbs to the current scandal, there could be a total #woke takeover as has happened in other states?

MP: Yeah, I was gonna say that I feel like Cuomo is the more Frank Underwood character while de Blasio is the ideologue. The sad thing is a lot of Democrats who are calling for Cuomo’s removal are from the woke crowd. It is the far, far-Left, and would I rather have the grandma killer or them? It’s a tough call, I suppose. And that’s the thing about a state like New York. Yes, it is theoretically possible a Republican could become governor. In fact, we see Republicans become governors of blue states all the time. Vermont is the most liberal state in the union, and they have a Republican governor. But it’s not the kind of Republican that you and I would be that happy with. It’s going to be a liberal Republican. So that’s a tough thing about politics in those kinds of states.

Your best bet is someone who’s kind of a RINO, but is a bulwark against the Left’s craziest factions. As for how this will play out, Cuomo is obviously refusing to resign, but actually, he could face consequences for both scandals. He has retained a lawyer for this and it was a lawyer who defended Harvey Weinstein. So this is something that’s being taken seriously, and ironically Cuomo signed a law two years ago that lowered the threshold for what counts as sexual harassment. Effectively a woman just has to reasonably be uncomfortable, and that can count. It would be ironic if that law is what ends up hanging him. Now the nursing home cover-up I think is going to become the crime, and unfortunately, crummy policy isn’t a crime.

Overall, Dumb and Dumber is a useful and readable guide not only to the current plague of mismanagement of large state and municipal authorities associated with the pandemic but of the ongoing blight suffered by New Yorkers during the 2010s that sees no sign of letting up.

Palumbo covers some of the more well-known issues related to homelessness and the end of gifted programs in public schools by de Blasio, while also reminding the reader of some lesser-known details such as the decision by Cuomo to charge state income taxes on out-of-state COVID healthcare workers brought in to help control the overflow of patients. Listen to more of my conversation with Matt Palumbo here: