As home to highly paid career bureaucrats and medical and other scientific research, MoCo ranks among the top 20 wealthiest counties in the nation (alongside nine others in Virginia and Maryland) ringing Washington, D.C. Full of highly educated residents and nationally ranked public schools, it has a majority-minority population.

It is also known as the “People’s Republic of Montgomery County” for its regulatory and leftist zeal. (Former Democratic National Committee Chairman Tom Perez served on the county council here.) So MoCo draws much of its wealth from redistribution by the federal government, abetted by the state. Maryland’s politics are hopelessly Democratic, with veto-proof majorities in the legislature. The resulting arrogance allows an occasional Republican, like Larry Hogan, to win the governorship, allowing the appearance of fairness.

In brief, Maryland’s plan for COVID-19 vaccine distribution ranks among the worst in the nation. This was not due to specific malign intent, but rather a systemic failure to steer policy according to basic, accepted facts.

COVID-19 kills the elderly (those over 75) at an enormously higher rate than the young. While people of any age with underlying conditions are vulnerable, the general rule is that the elderly often have underlying conditions (diabetes, heart, and impaired circulation) that may make the virus particularly dangerous if not fatal. So getting the vaccine first to the elderly is a solid rule. States that stuck to the age rule and made efficient distribution systems (using the National Guard) were able to make full use of the vaccines received. States as diverse as Hawaii and West Virginia adopted this sensible procedure.

While Maryland made age a major criterion, it—and MoCo—added so many other considerations that young, healthy people (grocery store workers) got vaccines while the ill and elderly waited anxiously in befuddlement for their turn. This monstrous enormity came about as follows: 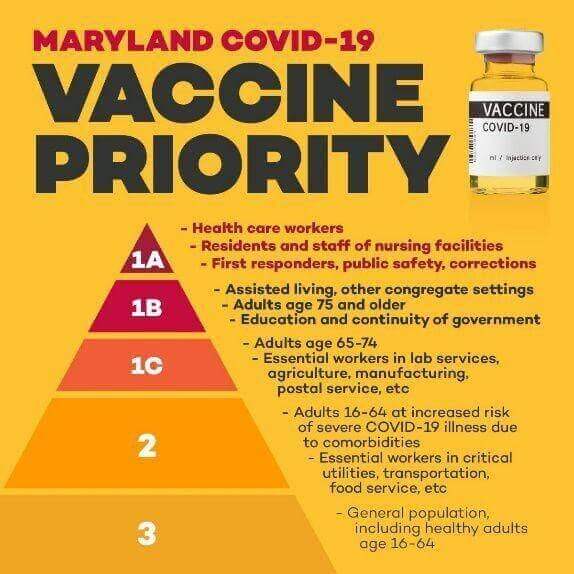 The pyramid illustrates the priorities that made obtaining vaccinations so frustrating for Marylanders and for those in Montgomery County in particular. Moreover, MoCo essentially replaced the pyramid with a more complicated scheme—adding 1A.1, 1A.2, 1A.3; 1B.1, 1B.2, 1B.3; 1C.1, 1C.2, 1C.3; with subgroups and sub-subgroups for the rest to be decided later. MoCo has only now moved to 1C.1.

In its 1A, tier 1 group, MoCo was no Cuomo, and wisely focused on nursing homes. Unlike the state, the county shifted public safety and health workers to another category. This is consistent with a focus on age. Most residents of nursing homes, of course, would be 75 or older, though a few would be younger (as was the case in the one in which I volunteered for 10 years). In practice, it would make sense to do the entire nursing home, plus its staff, since the vaccine would be brought there.

But problems arise with the added groups. MoCo’s 1A, tier 2 includes emergency medical personnel, vaccinators, and others in public health. They are followed by doctors, police, and fire, and some social workers in group 1A, tier 3. Who are healthcare workers? In practice, this meant the inclusion of medical school students, who might have some contact with patients. Masseuses were out but morticians and “lab workers” were in, in a nod to the county’s biotechnological industry. The state’s pyramid-model becomes unstable as the tip swells with corporatist categories and becomes top-heavy.

All these exceptions to age—to be accompanied by other exceptions, as allowed above for nursing homes—are of course subject to more exceptions. All of these categories have some rational claim to be prioritized over the general public—but surely not over those age 75 and above! Keep in mind that the original COVID crisis, which brought about the widespread shutdown of businesses and schools, was to prevent healthcare facilities from being overwhelmed with desperately ill patients, who might then suffer triage or worse.

Opening to the Aged, With Caveats

After the 1A tiers, we finally get an age level, 1B, tier 1, those 75 and older. But these elderly are not automatically offered appointments but must compete with those involved in 1B, tier 2, who include educators, not only K-12 but university level as well (including faculty who teach virtually). Thus young and healthy teachers, whose unions may not even want them back in classrooms, may advance over the old.

I know of a school crossing guard who received the vaccine, despite students not being back in the classroom. Also included in this tier 2 are those who work in grocery stores, public transit, and the postal service, as well as the homeless and prisoners. Tier 3 involves manufacturing workers. It’s obvious that unions and various interest groups played a major role in these preferences. (A few weeks ago I overheard a young stocker at Trader Joe’s complain about his early Sunday vaccine appointment time.)

As for actually getting that shot in the arm, each individual has to preregister with MoCo’s Department of Health. In addition, there is a growing list of hospitals, pharmacies, other health care providers, and mass sites that offer vaccinations.  At the county appointment site (there are only two), if the individual is not on “the list,” the enforcer will turn that person away, even if she is in her late 80s and waited outside in the 25-degree weather for an hour. The enforcer’s printout was wrong but no matter. Yet others who knew people who knew people who knew people got in. (The bending of the rules occurs at the lowest bureaucratic level.)

Compounding the cruelty, those in education and in the health professions are far more likely to be computer literate than those over 75. So the elderly suffer not only the debilities of age but from insufficient survival skills in the computer age. Montgomery County finally added a phone line for those not computer savvy. I know one woman in her 60s who has neither a cell phone nor a computer but is trying to get her ailing father, in his 90s, an appointment. A neighborhood widow is also without computer service and a vaccination appointment. And there is amazement about “racial equity” in vaccinations?

A month ago, the state and county opened up class 1C, those over 65 and those with “high-risk” medical conditions and a hodgepodge of homeless and those living or working in COVID-infected places or industries. Picture thousands, even tens of thousands, of highly educated Montgomery County residents waking up at early hours or staying up late (to catch the times all the different providers supposedly release their appointments) and getting on their computers, smartphones, and other devices.

Tens of thousands of people collectively spend hundreds of thousands of hours in search of a vaccine site among the dozens of locales offering them. On statewide and neighborhood websites, strangers exchange advice and rumors about when to snag the vax. (See Maryland Vaccine Hunters’ Facebook Group and Maryland Vaccine Hunting.) All have in common their slavery to screens and their accepted place in line alongside the homeless and behind convicted criminals. How is Rawls’ “least advantaged” “difference principle” ethic working for you today?

For some reason, Montgomery County, despite its population and state fairground (not to mention closed public schools), lacks a mass vaccination site. So one must drive hours away, to a drugstore or a stadium across the state—time doesn’t matter. The desperate denizens of MoCo even out hustled neighboring Prince George’s County residents to occupy the sites of this predominantly black and Hispanic area. The socialist republic’s virtue-signaling egalitarianism was abandoned like all other morality in previous plagues. So what of the lagging statistics of black and Hispanic vaccine recipients? There quickly followed a county resident preference rule. Who would come to MoCo anyway?

Perhaps in a few weeks, the remaining state and county age and occupations categories will be opened up, further increasing competition with the elderly.

Of course, a pricing mechanism, with profits plowed back into making the vaccine accessible to the poor, would have made sense, been humane, and kept many MoCo residents in their lanes. The Kaiser healthcare group, while following MoCo guidelines, took all who applied but preferred its participants, who paid for their membership through monthly premiums. That de facto pricing was one element of rationality in this madness.

I have been trying for weeks to get an elderly immigrant to let me assist him and his wife in their search for the vaccine. At first, he was anxious about whether to get it, and then he was eager to have access. But after weeks of frustration, he has given up. He wants nothing more to do with the mad scramble anymore and would rather talk with the deer in Rock Creek Park than associate with the human world.

It is hard to blame him. What MoCo has established is just a taste of the administrative state this country is headed for—appealing to the low instinct for survival and cajoling the educated to behave slavishly, all under one-party domination. This time it’s the vaccine, next it will be over gasoline or potatoes.

The general public has no union and, by itself, forms no interest group other than chump taxpayers, who shrug off increases. I blame no one for taking advantage of what their status gives them. Yet the common policy result may be that of Governor Andrew Cuomo. People will die whom science and common sense could have saved. The administrative state kills, and MoCo is a living example.