A new term has entered the political lexicon in recent months, and it appears to have left-wing activists sputtering with rage.

Conservatives on social media have been using “Blue Anon” to describe Democrats who believe in various government-sanctioned conspiracy theories, leading some on the Left to attempt to censor the potent term.

The very first sighting of “Blue Anon” on Twitter was in August 2018, according to the pseudonymous Twitter user “Max Nordau.”

Oh, and some call them #BlueAnon

In the wake of the rigged 2020 election, and the storming of the Capitol, Democrats and their allies in the corporate media have sought to pigeonhole the Republican Party as the party of conspiracy theorists.

In a series of tweets last month, Nordau used the term “Blue Anon” to frame the left as the most prolific conspiracy theorists.

"Who paid Brett Kavanaugh's debts?"
"Why did Justice Kennedy resign?"
"The Capitol riot was planned by Republicans, and Capitol police collaborated."
"Detention centers are concentration camps."

and, obviously: "Trump is a Russian asset."

Since then, mocking left-wing conspiracy theorists with the term “Blue Anon” has become a popular pastime on Twitter.

Over the weekend, the following definition of “Blue Anon” was submitted to Urban Dictionary by . . . , well, me, under the name of “Mrs. Tibbs.” 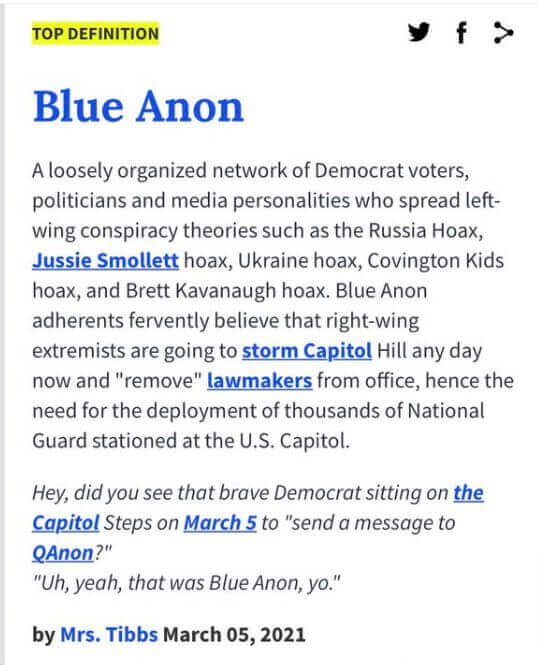 Conservatives on Twitter naturally reacted with shock and delight that this subversive message against the liberal establishment was allowed on Urban Dictionary’s platform. The term “Blue Anon” quickly became a “top definition” on the platform, and trended on Twitter.

Ladies and gentlemen, we did it pic.twitter.com/AFzdDbKXlV

By Sunday morning, however, the term “Blue Anon” had been removed from Urban Dictionary, most likely falling victim to a mass flagging campaign.

Wokies at Urban Dictionary zapped Blue Anon because it was too powerful! https://t.co/sec4ZUMKce pic.twitter.com/8gxxx9C6J3

It is also possible that someone within the company objected to the definition and had it deleted, or someone powerful from outside of the company demanded its deletion.

Urban Dictionary allows many controversial terms and definitions on its platform, including very lewd and profane entries, as well as those that contain politically derogatory definitions.

Google also appeared to be censoring the term, according to James Lindsay, a math Ph.D., founder of New Discourses, and bestselling co-author of Cynical Theories: How Activist Scholarship Made Everything about Race, Gender, and Identity—And Why This Harms Everybody.

After Blue Anon was removed from Urban Dictionary, Lindsay and many other users posted the definition on Twitter:

On Monday, the dam seemed to break, and 14 Blue Anon entries emerged on Urban Dictionary, most of them similar or identical to the original post. The original post by “Mrs. Tibbs,” however, was still missing. 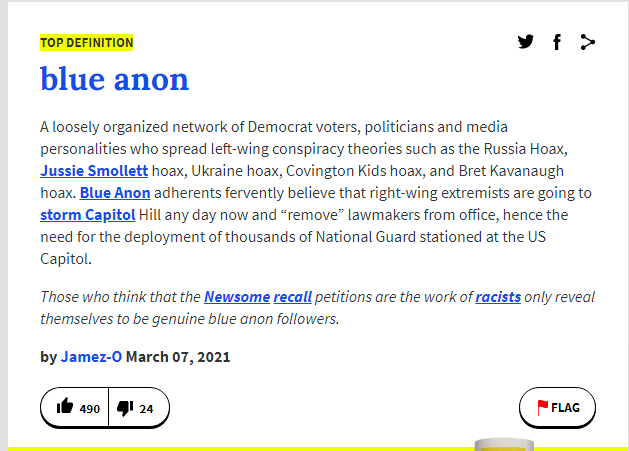 American Greatness has asked the platform to explain why the original post was removed. We have yet to receive a reply.