Democrats and left-wing activists are blaming “white supremacy” for the recent surge in violence against Asians in cities across the country.

The lawmakers blamed former President Trump for an alleged increase in white supremacy nationwide, which they claim has led to the increased attacks on Asians.

“White supremacy is the biggest bucket of concern when it comes to domestic terrorism, so this issue is specific to these individuals and how we want to help them, but it’s also part of a bigger picture,” Pelosi said.

On Saturday, hundreds of left-wing activists in New York City rallied for “unity and understanding” amid the uptick in violence.  They took their cue from congressional Democrats, and blamed the attacks on white supremacism.

In a poster advertising the rally, organizers demanded “justice for Vicha Ratanapakdee,” an Asian senior who was murdered in San Francisco.

However, it was a black teenager, not a white supremacist, who was arrested and charged with the murder.  Antoine Watson, 19, allegedly charged Ratanapakdee and knocked him to the ground in a horrifying attack that was caught on video.

The 84-year-old was just out taking his morning walk when Watson ran up and knocked him down.

The deadly assault of an elderly Asian American man in San Francisco is being blamed on white nationalism by left-wing activists. Antoine Watson, the suspect arrested over the homicide, is black. pic.twitter.com/HcqG79kQYL

This protest is in response to anti-Asian/AAPI violence happening in New York and across the country. pic.twitter.com/Qy3kG3tRiK

“The current justice system is pitting Black and Asian communities against one another, just like how news sources did during the L.A. Riots,” said rally organizer Rohan Zhou-Lee, according to left-wing website Common Dreams. “We can fight anti-Asian and anti-Black hate at the same time.”

“We have to imagine a new world of justice rooted in compassion,” Zhou-Lee added, “not a system built on the slavery of Africans, the genocide of the Indigenous, the exploited labor of Asians, and the lynching of all the above.”

At a separate rally, state Sen. John Liu (D) and Rev. Al Sharpton reportedly spoke to “a masked and distanced audience at the National Action Network House of Justice in Harlem.”

“We do not need to be anything but unequivocal in standing against the rise in hate against Asian Americans, because we know what hate feels like,” said Sharpton.

Both men blamed Trump for “fanning the flames of bigotry” when he used the terms “China virus” or “Kung Flu” to indicate that Covid-19 came from China.

“Despite the advice of community leaders, of advocates, of health and public professionals, to say that it would be inaccurate and downright derogatory to use those terms, 45 didn’t care, he kept using it,” said Liu.

In a recent MSNBC interview, Janelle Wong, an Asian American studies professor at the University of Maryland seemed to worry that public awareness about the racial nature of the attacks could lead to unfair stereotypes against blacks.  “If addressing violence against Asian Americans entails furthering stereotypes about Black criminality and the policies associated with those stereotypes… we’ve misdiagnosed the problem,” Wong said.

“The ideas that fuel anti-Asian prejudice really come from our nation’s white supremacist history and can’t be separated from that history,” she added. “Engaging in anti-Black rhetoric or blame does nothing to get at the roots of this prejudice.”

While crime statistics show that white perpetrators commit about 24 percent of the crimes against Asians, the majority of the violent attacks in the past year appear to have been committed by black assailants.

Department of Justice crime statistics indicated in May of 2020 that black on Asian crime is 280 times more common than Asian-on-black crime.

In fact, Black on Asian violence has been a scourge for years— long before the Covid-19 pandemic.

City officials, including the Police Department, say these assaults are part of a larger crime picture where gangs of kids take advantage of a vulnerable group of small stature. But Mo participated in a 2008 survey by the Police Department in which about 300 strong-arm robberies were analyzed. “In 85 percent of the physical assault crimes, the victims were Asian and the perpetrators were African American,” she said.

In recent years, the media has been careful to leave the race of the perpetrators out of their reporting, but surveillance video, when available, fills in the blanks.

In Philadelphia last March, a graphic video showed multiple black youths surrounding an Asian man, and striking him in the head causing him to fall to the ground, according to CBS Philly.

In New York City, a black man berated an Asian man on the subway, ordering him to move, and spraying the air with disinfectant.

There's not a single confirmed case of an Asian infected in NYC. Stop discriminating cause the virus definitely doesn't. #racist #coronavirus pic.twitter.com/Wt1NPOuQdy

In perhaps the most horrific black-on Asian attack of 2020, an Asian woman in Milwaukee was raped and beaten to death by a pack of up to eleven black teenagers.

Investigators say that on Sept. 16, Ee Lee was beaten by the group near a tree. She then ran towards a pond, where the assault continued.

The warrant states a group of “younger males” possibly attacked and assaulted Lee near a tree in the park. Lee was able to break away from the group and ran toward the pond. Investigators say several people followed her to the pond where she was dragged and later found beaten, unclothed and unconscious. A hospital examination revealed evidence of sexual assault, the warrant states.

So far only two of the assailants have been charged in the attack.

“Kamare R. Lewis, 17, and Kevin T. Spencer Jr., 15, were charged Tuesday in Milwaukee County Circuit Court with one count each of first-degree intentional homicide and first-degree sexual assault in connection to the Sept. 16 attack. They were charged as parties to the crimes,” the Milwaukee Journal-Sentinel reported. 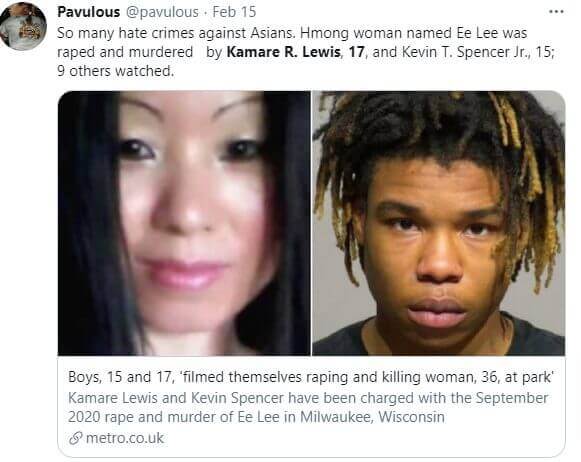 The boys beat Ee Lee to death after they asked her for money and she refused, according to Metro.co.uk.

Lewis and Spencer reportedly began torturing Lee after walking up to her while she sat on a blanket in a park. Then they dragged her towards the pond in Washington Park, where the pair raped and beat her. Metro reported that Lewis recorded the sexual assault on his phone, and sent the video to friends on Facebook Messenger afterwards.

This horrific crime had nothing to do with Trump or white supremacy.