With President Biden and Kamala Harris steering the American ship of state, there isn’t much left at the federal level to stop “woke” politics from encroaching even further into all aspects of American society. In every federal agency including the military, in corporate America including sports and entertainment, throughout the colleges and universities, and even down into the K-12 public schools, “woke” ideology now permeates the culture. It is a seductive, divisive philosophy that emphasizes group conflict over individual competition and achievement. If it isn’t stopped, it will destroy everything that has made America great.

To appreciate how far this ideology has progressed, a good example comes from Christopher Rufo, writing for City Journal, who describes a public elementary school in California that “recently forced a class of third-graders to deconstruct their racial identities, then rank themselves according to their ‘power and privilege.’”

Third graders. And this is happening all over America.

A few graphics borrowed from the woke movement can summarize the progression of woke ideology in America. The first one, found on Wikipedia with multiple citations under “whiteness theory,” traces its origins all the way back to 1996. It is an early attempt at popularizing the now ubiquitous notion of “intersectionality,” the idea that intersecting identities define a person’s position on a continuum that ranges from oppressed to privileged. 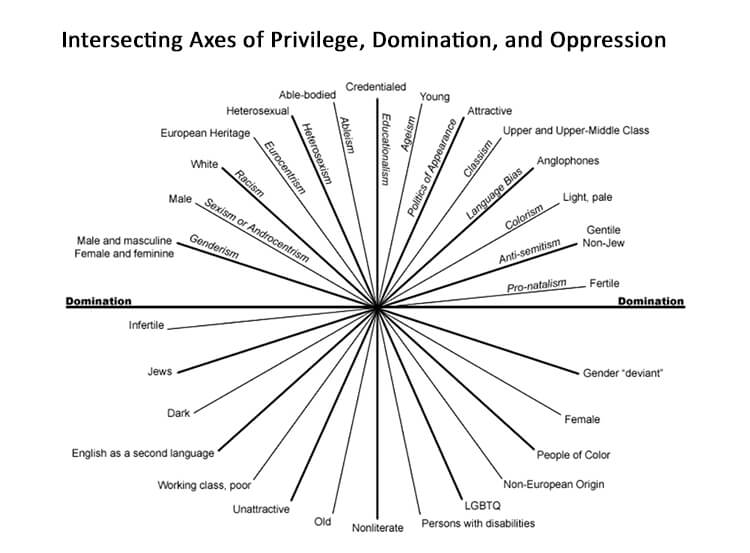 A logical corollary to intersectionality is the concept of implicit bias. The National Museum of African American History and Culture has produced a lengthy online resource for educators called “Being Antiracist.” Included in this guide, which asserts that “To create an equal society, we must commit to making unbiased choices and being antiracist in all aspects of our lives,” there is a graphic produced by the “National Equity Project” to illustrate “implicit bias and structural racism.” 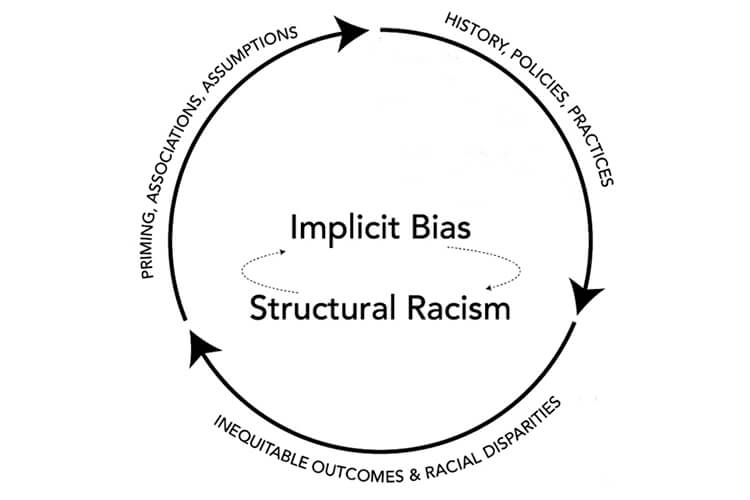 It is impossible to explain this convoluted concept in brief. Its power comes from building on the assumption of an intersectional dominance hierarchy, and proposing that this hierarchy is self-perpetuating. The historical inequity creates ongoing “inequitable outcomes and racial disparities,” which in turn creates “implicit bias” against oppressed groups.

If these concepts—intersectionality, and implicit bias/structural racism—form the foundation of identity politics, what’s new and unprecedented are the extremes to which the American Left is now trying to combat its effects.

One might argue, with cause, that Americans have valiantly tried to institutionalize anti-racism for the last 60 years. The Civil Rights Act. The attempts to desegregate schools. The strict laws against housing discrimination. Affirmative action, hiring preferences and quotas, race-based preferences in government contracts, welfare, and public housing. What was all of this, if not institutional anti-racism?

But despite all these efforts, or perhaps because of them, disparities in group achievement still exist between whites and people of color. Again, never mind the extraordinary achievements of Americans of Philippine, Indian, or Nigerian descent, all three of which are examples of people of color who, as a group, outperform whites in America.

But these arguments fall on deaf ears. For the woke warriors, if a disparity exists, racism exists. Their remedies have now moved beyond merely attempting to enforce aggregate equality across groups, which itself is an absolutely futile, horrible strategy. Now, in parallel with an unprecedented level of aggression in calls for equality in outcomes—more quotas, more forced integration through “inclusive” residential zoning laws, and “reparations”—they have turned to denigrating white culture itself.

A notorious example of this is a chart entitled “Aspects and Assumptions of White Culture,” briefly published and distributed by the National Museum of African American History (a museum that is part of the prestigious Smithsonian Institution), before taken down after withering criticism. But the fact that this chart didn’t survive on this website does not diminish its value in explaining just how absurd the woke mentality has become. This chart, and others like it, survive on websites promoting woke values all over the United States. From one of them, here it is: 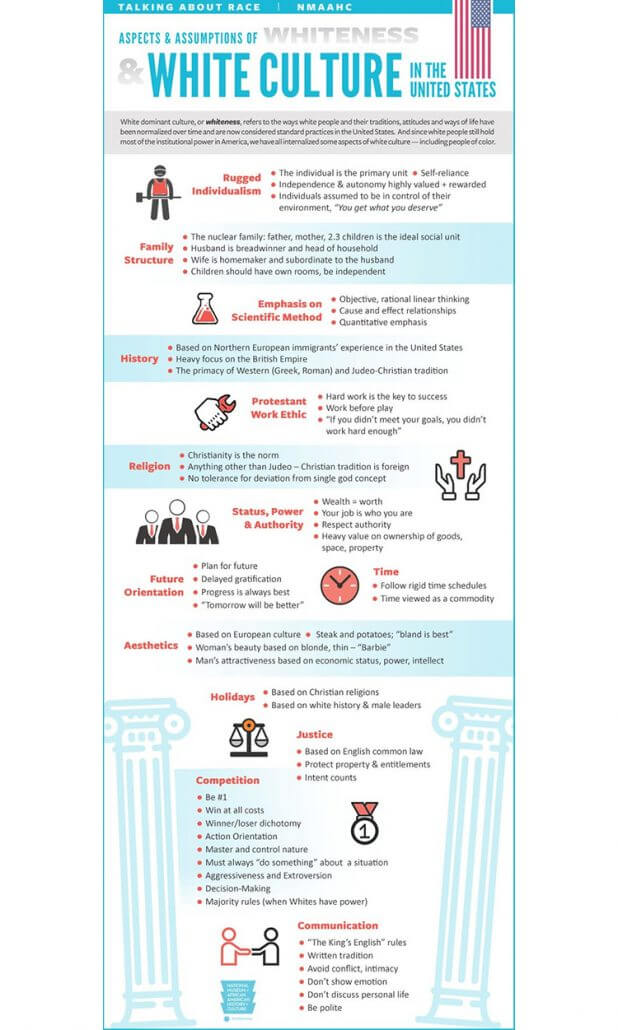 It’s difficult to review this chart without wondering how else a society is supposed to be organized. One might simply say, again with cause, that these values define American society and the optimal course of action for anyone joining American society would be to emulate them, as Filipinos, Indians, and Nigerians assuredly have done. But why wouldn’t everyone, in any healthy society, want to adopt these values: hard work, strong families, the scientific method, precise language skills, competitiveness, respect for private property, or being polite?

Among the true believers in the woke movement, the rejection of these values rests on one immutable fact: people of color—blacks and Hispanics in particular—have lower group achievements than whites, and therefore white racism is to blame. To cure this racism, practical steps to enforce equal outcomes are not enough, “whiteness” itself has to be called out as inherently toxic, and whites must be reeducated.

A very recent example of how far this has come is in the next chart, dreamt up by Mark Federman, a New York City high school principal. It’s fair to wonder at this point if these guys are just trolls, playing an easy game in exchange for 15 minutes of fame. But let’s take Federman at his word, since, sadly, what he’s come up with is not extraordinary, but a typical example of where the woke mob is taking this country.

As reported in the New York Post and elsewhere, Federman sent to the parents of his students a handout asking them to “reflect on their whiteness.” The material described “The Eight White Identities,” as developed by Barnor Hesse, an associate professor of African American Studies at Northwestern University. The graphic accompanying Federman’s handout is displayed below. At one extreme, in the red zone, is the “White Supremacist.” At the other extreme, in the virtuous green zone, is the “White Abolitionist,” i.e., the fully woke white person who is committed to “changing institutions, dismantling ‘whiteness,’ and not allowing whiteness to reassert itself.”

Where is all this leading, and what’s really going on? Matthew J. Peterson, editor of The American Mind, in an essay published during the height of the nationwide BLM/Antifa rioting last summer, described the true agenda of the “woke” movement as follows: “A complete overhaul of the principles of our justice system to put group ‘identities’ above equal individual rights, the erosion of private property and private education, and the destruction of traditional families and moral culture.”

Peterson, writing for the initiated, only mentions “oligarchs” once in his essay, which instead focuses on the Marxist roots of the contemporary woke movement. But the funding of violent leftist radicals is not coming from grassroots communists. It is coming from global corporations and leftist billionaires. The intent is to destroy the sense of shared identity that defines America. By doing this they will eliminate unified opposition to their agenda, which is to remake America into a mere economic unit where the vast majority of residents are of limited means and dependent on government entitlements, the middle class is wiped out, and the upper class exists to serve an elite oligarchy.

America’s ruling class of oligarchs are well on their way to achieving this goal. Their strategy is to import tens of millions of unskilled and semi-skilled immigrants into the nation, most of them nonwhite, relying on them to drive down wages and vote for bigger government. At the same time, they wage a relentless campaign to convince America’s roughly 40 million citizens descended from African slaves that they have no hope of success against “systemic racism” and must instead depend on government handouts and mandates. It takes extraordinary individual character for anyone, no matter what their heritage may be, to resist these incessant lies.

To assure this process continues, America’s public schools refrain from offering immigrants useful, marketable educations so they can achieve economic independence and assimilate into the population. Instead they indoctrinate these immigrants to resent anyone who is white as having unwarranted privilege based on a legacy of oppression, and to consider themselves to be victims of that oppression. Immigrants who do well in the United States, and there are many, do this in spite of everything they consume in the public schools or mainstream culture.

Meanwhile, the whites who speak out against the loss of national identity, sovereignty, economic freedom and prosperity and try to expose the exploitative roots of it all, are ruthlessly suppressed as hateful racists. It’s that simple. And it’s working.