“Full unlawful assembly in display. Never seen anything like this,” said Elijah Schaffer, a videographer on the scene.
“Insane. Thousands occupying.”

The storming of the Capitol building happened soon after President Trump gave a rousing speech at the massive Trump rally on the National Mall in Washington DC. The president noted during his address that some 250,000 supporters were in town for the March for Trump rally.

Schaffer noted in a subsequent tweet, that the MAGA horde had torn down “four layers of security fencing.”

“Trump supporters have breached the Capitol building, tearing down 4 layers of security fencing and are attempting to occupy the building — fighting federal police who are overrun … This is the craziest thing I’ve ever seen in my life. Thousands, police can’t stop them.”

BREAKING: Trump supporters have breached the Capitol building, tearing down 4 layers of security fencing and are attempting to occupy the building — fighting federal police who are overrun

This is the craziest thing I’ve ever seen in my life. Thousands, police can’t stop them pic.twitter.com/VVdTUwV5YN

The Trump supporters chanted “USA, USA, USA!” as they clashed with the police.

The Capitol reportedly went into lockdown and staffers were evacuated amid the chaos.

Police are going door to door yelling at people to evacuate in US Capitol buildings. https://t.co/DxX93VRPPp

URGENT – Protesters have entered the US Capitol. pic.twitter.com/UgdBSz0qvJ

House members have reportedly been instructed to put on masks as police deploy tear gas inside the U.S. capitol dome.

The U.S. Senate chamber is being evacuated and senators taken to a secure location, according to Disclose T.V.

JUST IN – Protesters smashing the doors to the U.S. House chamber.

BREAKING: revolution in process as Trump supporters break into the Capitol building, attacking police, breaking windows, and knocking down doors

The people have pushed through & are storming to main chambers pic.twitter.com/NW6VDDNBQw

BREAKING: I am inside Nancy Pelosi’s office with the thousands of revolutionaries who have stormed the building

To put into perspective how quickly staff evacuated, emails are still on the screen along side a federal alert warning members of the current revolution pic.twitter.com/m24YjtWIXh

Everything in the Senate just stopped after an aide just whispered “protestors are in the building” pic.twitter.com/qR2gSokK5v

Video from the chamber. pic.twitter.com/UKF7MScHKN

Wow! Watch the protestors storm the US Senate floor. pic.twitter.com/sfHNSa4QBT 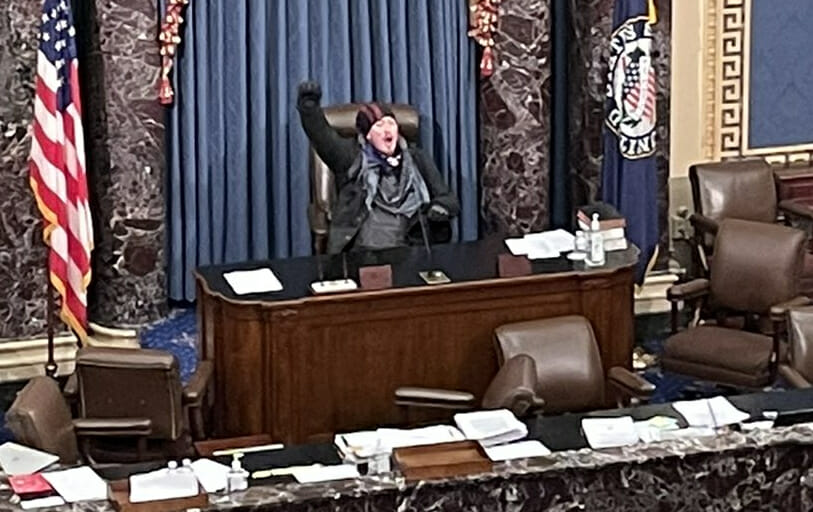 Trump protesters just discharged a fire extinguisher outside Senate chamber. Many protesters are inside building, and most people are hiding from them pic.twitter.com/0y2sk8LHWd

GRAPHIC: MSNBC shows video of a person being wheeled out of the Capitol on a stretcher, covered in blood and in very bad shape. pic.twitter.com/W6jKaXDudK

At 2:13 p.m. President Trump took to Twitter to urge his supporters to be peaceful and to follow the law.

“Respect the law and our great men and women in blue,” Trump tweeted.

I am asking for everyone at the U.S. Capitol to remain peaceful. No violence! Remember, WE are the Party of Law & Order – respect the Law and our great men and women in Blue. Thank you!

Trump’s allies quickly echoed his call for law and order with tweets of their own:

These actions at the US Capitol by protestors are truly despicable and unacceptable. While I am safe and sheltering in place, these protests are prohibiting us from doing our constitutional duty. I condemn them in the strongest possible terms. We are a nation of laws.

This scene at the US Capitol is shocking and disgraceful. The mob violence the left has habitually engaged in these past years is despicable, but in no way excuses these crimes. We are a nation of laws, not anarchy. We are all Americans first. 🇺🇸 Pray for our country!

Anyone participating in violence must be arrested. Immediately.

This is unacceptable. And unAmerican.

We are the party of Law & Order – prosecute anyone who crosses that line to the fullest extent of the law.

The violent thugs attacking the U.S. Capitol and law enforcement today are no better than the left-wing scumbags that attacked the federal courthouse and LE in Portland daily for months.

It's all wrong and it all must stop immediately.

At President @realDonaldTrump’s direction, the National Guard is on the way along with other federal protective services.

We reiterate President Trump’s call against violence and to remain peaceful.

Peaceful protest is the right of every American but this attack on our Capitol will not be tolerated and those involved will be prosecuted to the fullest extent of the law.