It would be hard to find anyone in politics who has tried harder than Joe Biden to surround himself with appointees who are either not white, not male, or not heterosexual. Biden’s journey down diversity lane began in earnest when he announced he would select a “black woman” to be his running mate. True to his word, Biden selected Kamala Harris, the Democratic senator from California who is not only a black woman, but also part Asian. Score!

The real reason Biden chose Harris was to tap into her connections to the trillions in wealth to be found in California. Whether it’s the aristocracy of old San Francisco (Getty, Pelosi, Brown, and so many others), or the nouveau riche billionaires of Silicon Valley (Mark Zuckerberg comes immediately to mind), or the liberal moguls nestled in the Hollywood Hills, Harris has every one of them on speed dial.

Good choice, Joe. Harris checks three diversity boxes and she taps all the money on the Left Coast.

As we will see, when it comes to cabinet picks and White House staff, Biden has done a great job making choices that “look like America,” and as of Sunday, he’s almost done. In the cabinet, only three vacancies remain, the attorney general and the secretaries of commerce and labor. In the White House, only two high profile jobs remain vacant: director of central intelligence and the small business administrator.

To get an idea of what Biden is aiming for, the following chart shows the ethnic makeup of America. Drawn from 2019 U.S. Census Bureau data, it is sorted not only by ethnicity, but also by age group. 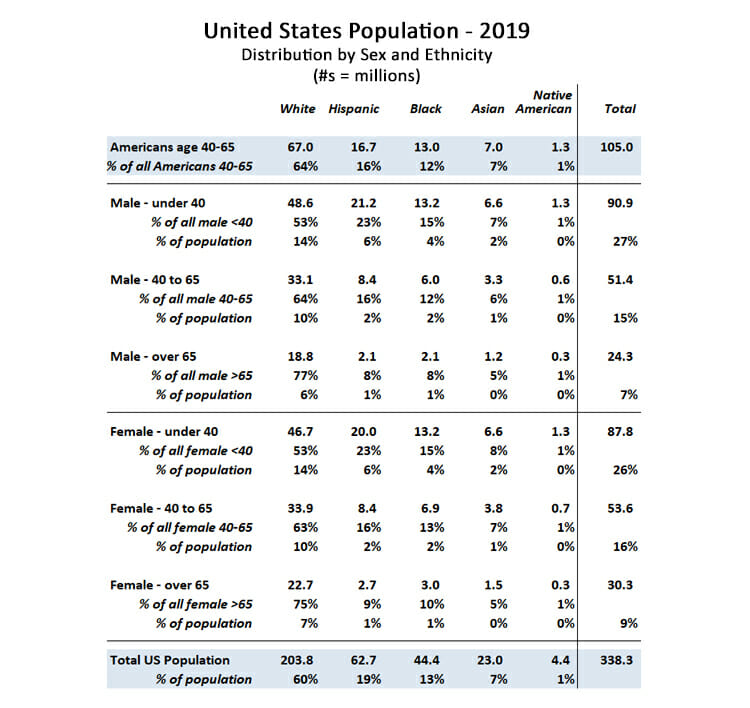 The first thing to note about this demographic snapshot of the United States is the arbitrary nature of the categories. In 2019, 17 percent of newlyweds in the United States were “mixed-race” unions, but how are the children of these marriages classified? As it turns out, in marriages where one of the spouses is white, the U.S. Census Bureau classifies their offspring as identifying with the race of the nonwhite parent. Depending on just how militant one feels about skin color and “whiteness,” the impact of this choice by the Census Bureau may serve to understate the percentages of whites in all age categories. Similarly, “Hispanic” applies to anyone with a Spanish surname, despite the fact that a significant percentage of American Hispanics are as white as “whites.”

Also arbitrary is the definition of “Asians.” This category includes people from places as dissimilar as Saudi Arabia and Japan, and everywhere in between. With that in mind, and in the interests of full disclosure, to eliminate one column and simplify the chart, the Census Bureau category “Hawaiian/Pacific Islander” was consolidated with Asians, since “Hawaiian/Pacific Islanders” only constitute one-half of one percent of the U.S. population.

What Diversity Parameters Is Biden Aiming For?

When adhering to diversity mandates, “proportional representation” is everything. But proportional to what?

After all, when searching for people to fill top positions in the federal government, most of the people evaluated are between the ages of 40 and 65. Sure, there are wunderkinds under 40 who make it, and there are plenty of Americans over 65 who can still do the job, but most candidates will fall in the 40-65 age group. The two shaded sections in the chart above show both distributions—the top shaded section shows the distribution by sex and ethnicity for Americans between ages 40 and 65, the bottom shaded section shows the same breakdown for Americans of all ages.

So how did Joe Biden do? The next chart shows his cabinet picks and White House staff appointments so far, categorized by sex and ethnicity.

When viewing this chart, two points jump out. On just cabinet appointments, men outnumber women two-to-one, despite being divided more or less 50-50 in the general population. With apologies to Jordan Peterson, James Damore, and many others who might identify reasons other than sexism for this disparity, Biden is off his game. More women!

Also obvious at first glance is the fact that whites are underrepresented. At the least, 60 percent of the appointees should be white in order to be represented proportionally. But in both the cabinet and White House staff selections, whites represent only 50 percent of Biden’s picks. Then again, we might refer to the above chart that shows that among Americans under 40, whites (narrowly defined) only constitute 53 percent of that younger age group, and assume Joe Biden is taking into account America’s future.

Heck, if Joe Biden looks ahead far enough, he might find it appropriate to not allow any whites onto his cabinet or White House staff. 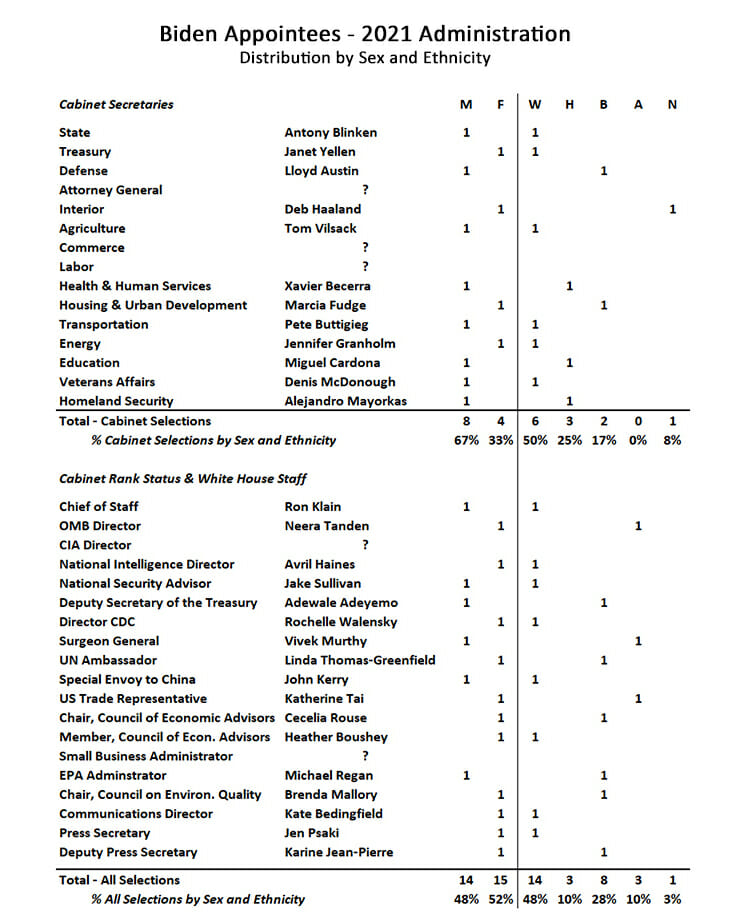 What else is worth observing as we descend into the rathole of proportional inclusion or else? It appears the case, especially with respect to cabinet positions, that Hispanics and blacks are overrepresented compared to their share of the U.S. population, and Asians, like whites, are underrepresented. But in general, and according to the terms the progressives have set before us, it seems fair to say that Joe Biden has done a commendable job of achieving “diversity” in his appointments. Or are they?

If you just run the numbers, Biden is doing a pretty good job. But you would not necessarily get that impression from reading the many press reports on Biden’s effort to ensure “diversity.” And there is no shortage of press reports, because who cares if these appointees can do their jobs, as long as they’re “diverse”?

A typical report comes courtesy of the BBC, which asks “Biden cabinet: Does this new team better reflect America?” The author helpfully includes montages of thumbnail portraits, each one representing recent U.S. presidential administrations, including Clinton 1993, Bush 2001, Obama 2009, Trump 2016, and Biden 2021. The graphic artist has helpfully used grayscale to identify the white males, just in case you don’t get the point. Reporter Ritu Prasad, after quoting several still-unhappy progressives on Biden’s choices, makes sure to end on a note of displeasure. “So is this first cabinet diverse enough?” Prasad writes. “It’s progress—but for many of the supporters who delivered Mr. Biden the presidency, he’s not there just yet.”

Prasad is not alone. As reported in the Washington Post, “Members of the Congressional Asian Pacific American Caucus met virtually with some of President-elect Joe Biden’s transition team Monday to express their growing concern that there will be insufficient Asian American representation in top-tier spots in Biden’s administration.”

And according to Politico, “The faces of the economic team President-elect Joe Biden unveiled publicly Tuesday included an African American woman, a man born in Nigeria, an Indian American woman and just one white man. The response from Asian American, Black and Latino Democrats: It’s not enough.”

Scouring news sources for information about the Biden appointees, the focus is overwhelmingly on diversity, with considerations as to competence almost as an afterthought. Nothing is wrong necessarily with being conscious of diversity, but the priorities are flipped. Competence should matter more. When it doesn’t, God help us.

Which leads to the rest of the story when it comes to diversity: you can’t just be “diverse,” you have to be the right kindof diverse.

That attitude is on display in a recent article in Business Insider headlined, “The diversity of Biden’s cabinet will be just for show if it ends up promoting bad policies.” Writer Manny Fidel elaborates: “Just because Biden’s cabinet is diverse, doesn’t mean people of color should get excited for officials who may push policies that hurt their communities.”

But where does that leave the diversity warriors? Which factor predominates? Color and gender? Or political ideology? All we can know for sure is that competence, that old-fashioned, oppressive notion, is the third priority, after identity and ideology.

Apparently, in the world of progressives, both matter. This means two things, both of them bad. First, if you’re a white male, it doesn’t matter if you’ll do all the things the progressives want you to do, you still need to go to the back of the line. Second, if you’re not a white male, and your sincere commitment to the welfare of your community does not embrace the progressive agenda, don’t even bother to get in line—you will not be part of the team.

This is the nonsensical agenda that Joe Biden, a man well past his prime, is dealing with as he picks his team, and he’s going to deal with this agenda as long as he’s president. At least conservatives are allowed to be colorblind. Not so with the progressives. Or as Biden famously summed it up, “if you don’t vote for Joe Biden, you ain’t black!”