White House trade adviser Peter Navarro on Thursday released a damning thirty-six page report on 2020 election fraud, titled “The Immaculate Deception: Six Key Dimensions of Election Irregularities,” concluding that there was either “a coordinated strategy” to steal the election, “or unfairly tilt the playing field in favor of the Biden-Harris ticket.”

According to the report, the outright voter fraud ranged from “large-scale manufacturing of fake ballots, bribery, and dead voters, to ballots cast by ineligible voters such as felons and illegal aliens, ballots counted multiple times, and illegal out-of-state voters.”

A table in the report shows how the six battleground states exhibited the six dimensions of election irregularities. 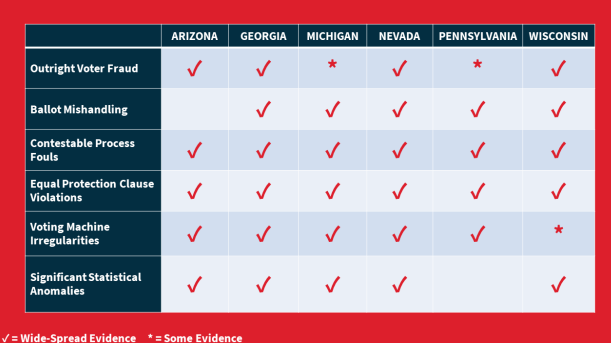 Navarro also alleges that the “significant irregularities appear to be ubiquitous across the six battleground states.”

Only Arizona is free of any apparent widespread ballot mishandling while only Pennsylvania lacks significant statistical anomalies. The rest of the matrix is a sea of checkmarks and occasional stars.

Significantly, the report states that thousands of dead people in Pennsylvania and Georgia appear to have voted.

In Pennsylvania, for example, a statistical analysis conducted by the Trump Campaign matching voter rolls to public obituaries found what appears to be over 8,000 confirmed dead voters successfully casting mail-in ballots. In Georgia – underscoring the critical role any given category of election irregularities might play in determining the outcome – the estimated number of alleged deceased individuals casting votes almost exactly equals the Biden victory margin.

In Georgia, the report goes on to claim, over 20,000 absentee or early voters – almost twice the Biden victory margin – cast their ballots after having moved out of state.

In the voting machine section, the report makes note of a number of improbable vote surges after the election that all went to Biden:

At the stroke of midnight on Election Day, President Donald J. Trump appeared well on his way to winning a second term. He was already a lock to win both Florida and Ohio; and no Republican
has ever won a presidential election without winning Ohio while only two Democrats have won the presidency without winning Florida. At the same time, the Trump-Pence ticket had substantial and seemingly insurmountable leads in Georgia, Pennsylvania, Michigan, and Wisconsin. If these leads held, these four key battleground states would propel President Trump to a decisive 294 to 244 victory in the Electoral College.

At least one instance of a large and inexplicable vote switching and vote surge in favor of Joe Biden took place in Antrim County, Michigan – and it is associated with the controversial aforementioned Dominion-Smartmatic voting machine hardware-software combo. In this Republican stronghold, 6,000 votes were initially, and incorrectly, counted for Joe Biden. The resulting vote totals were contrary to voter registration and historical patterns and therefore raised eyebrows. When a check was done, it was discovered that the 6,000 votes were actually for Donald J. Trump. A subsequent forensic audit of the Antrim County vote tabulation found that the Dominion system had an astonishing error rate of 68 percent. By way of comparison, the Federal Election Committee requires that election systems must have an error rate no larger than 0.0008 percent.

In Georgia, there were numerous “glitches” with the Dominion machines where the results would change. The most notable of these changes was a 20,000 vote surge for Biden and 1,000 vote decrease for Trump.

According to the report, these irregularities were more than enough to swing the election in favor of Joe Biden.

Navarro concludes that “patterns of election irregularities . . . are so consistent across the six battleground states that they suggest a coordinated strategy to, if not steal the election, strategically game the election process in such a way as to . . . unfairly tilt the playing field in favor of the Biden-Harris ticket.”

The entire report can be read here.