“For they have sown the wind, and they shall reap the whirlwind.”

The U.S. House of Representatives in June passed a bill in favor of statehood for the District of Columbia. In response, historian Nicole Hemmer wrote, “should Joe Biden win the presidency and bring with him majorities in the House and Senate, he should make statehood for D.C.—and for Puerto Rico—a priority for his first 100 days in office.” Also in June, The New Republic published an opinion column stating “D.C. Statehood Is a Test of Biden’s Political Courage.”

The supposed moral rationale for adding two states to the Union has always been based on “providing representation” to these American citizens. But Puerto Rico ought to become an independent nation, and perhaps the outer portions of Washington, D.C. can be trimmed, with the trimmings absorbed into Maryland and Virginia. And “representation” isn’t the real reason Democrats want to turn Puerto Rico and Washington, D.C. into states, anyway. They want more Democratic senators, and they want more Democratic congressmen.

Now that President Trump is going to attempt to fill a vacancy on the U.S. Supreme Court, supposedly defying precedent because it is so late in his first term, Democrats in the U.S. Congress say “all bets are off.” If fact, some Democrats, such as former Bill Clinton spokesman Lanny Davis, are returning to the party’s roots and are calling for blue state secession while mocking red states as incapable of self-government.

Less-radical Democrats are merely threatening that if their party regains control of the White House and the Senate, they will turn Puerto Rico and Washington, D.C. into the 51st and 52nd states, before moving on to abolishing the Electoral College and packing the Supreme Court.

When it comes to being governed without having a voice, there are plenty of acute cases across America. As any votes-by-county map of the United States that tracks the last several presidential elections will attest, a handful of large cities control the fate of several state legislatures and, all too often, the U.S. presidency.

These cities are run by public sector unions, leftist billionaires, extremist environmentalists, and—if they behave—multinational corporations. They have concocted an agenda relying on racial tension and resentment, along with environmental fear-mongering, to con overwhelming majorities of their brainwashed urban populations into voting Democrat, year after year after year.

The Great State of Jefferson

Two examples of underrepresented populations in America are in rural California, which is controlled by voters in Los Angeles and the San Francisco Bay Area, and in rural Oregon, which is controlled by voters in Portland. In the rural heartland of these states—thanks to the passed down by the urban voters who outnumber them—productive, beleaguered residents struggle to survive.

They face punitive taxes to support the urban poor, who are themselves victims of utterly corrupt “programs” supposedly designed to help them but actually designed in ways that only pour money into the hands of bureaucrats and cronies. They face an impossible array of environmental regulations that have made them unable to productively earn a living on their own land. And more recently, they’ve seen thousands of square miles incinerated thanks to years of state harassment that made it impossible for them to thin their forests.

There is a solution to this oppression. Form new states. 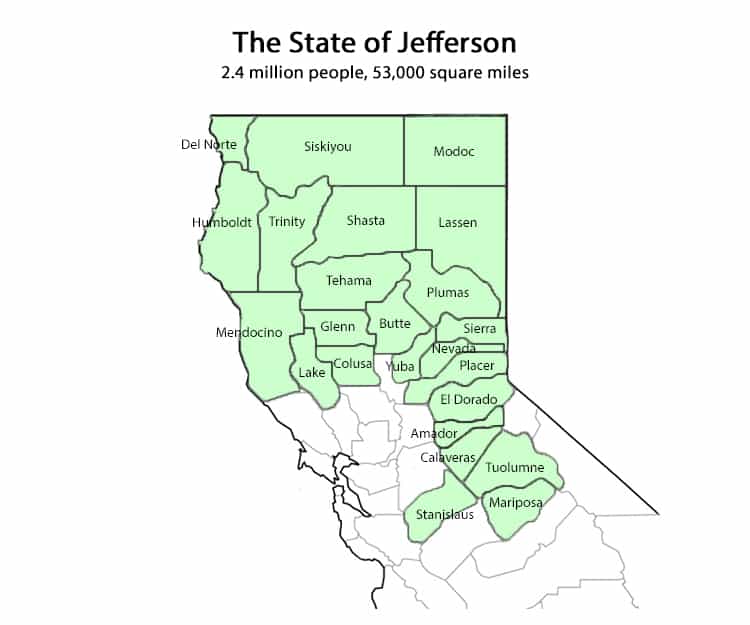 This is what a growing majority of citizens in rural counties across America are concluding may become necessary, and in California and Oregon, considerable progress already has been made. The state of Jefferson is rural California’s answer to oppression from the state legislature.

The proponents of the state of Jefferson have produced a map slightly different from this one; their latest does not include the counties of Humboldt or Del Norte. Nonetheless, as momentum grows for secession, there’s a good chance the freedom-loving free spirits of California’s far northwestern counties will embrace the opportunity. The other 22 counties shown on this map appear on the state of Jefferson movement’s website as being “counties with declarations.”

One thing is certain: if you drive the highways and back roads in these counties, “State of Jefferson” signs are everywhere.

The State of Greater Idaho

And then there’s the state of Greater Idaho. This movement, based primarily in eastern Oregon, is motivated by the same grievances that animate California’s secessionists. In this case, the area in and around Portland, where nearly half of Oregon residents live, elects the representatives who control the state legislature, and it makes their lives miserable.

While the “Greater Idaho” movement today wishes to become absorbed by the state of Idaho, should Puerto Rico and Washington, D.C. become states, they will attract more support from across the United States if they decide to form their own new state.

And why not? With more than 1 million people and sprawling over 78,000 square miles, they’ve got a population larger than six states, and they’re virtually tied with two more—Montana and Rhode Island. 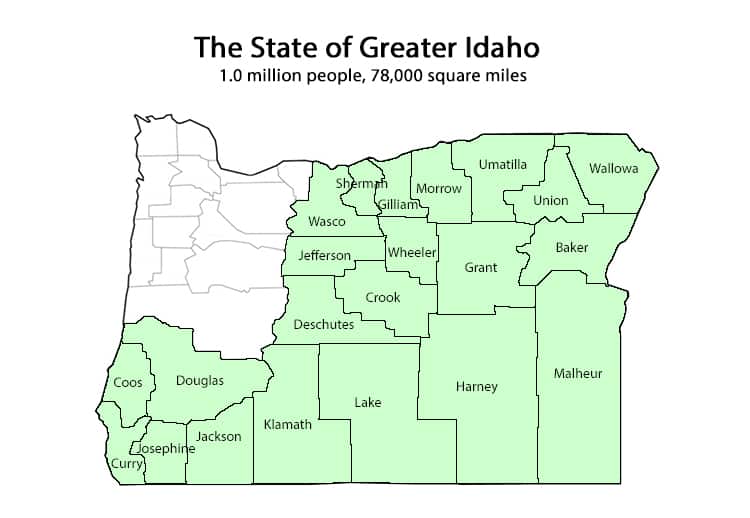 But other names can apply. “Cascadia” has been proposed as the name of a new state to be carved out of Oregon, although that movement appears to have a diverse assortment of proponents, with widely differing objectives. For example, some supporters of Cascadia want to become a new independent nation, with Oregon and Washington seceding from the U.S. and merging with British Columbia, which would secede from Canada.

The Political Viability of Breakaway States

Proposals to add two new states with conservative rural populations will attract substantial new support in the event of a Biden victory combined with a Democratic takeover of the U.S. Senate. There would be an explosion of new support even in the absence of statehood for Washington, D.C. and Puerto Rico, because if Democrats acquire total control of the federal government, the oppression rural residents are feeling in blue California and blue Oregon is going to be felt all over America. Movements by rural areas to secede will become popular from Southern Illinois to the backcountry of Minnesota.

As rural residents in states dominated by urban Democrats begin to visualize what life would be like if they could govern themselves, the populist momentum could become uncontainable.

Imagine living in a forest community, where if you haven’t yet been run off your land, you’re all just waiting to burn to death because you can’t afford to hire “permit application facilitators” and other assorted high-priced experts, along with litigators and lobbyists, in the hope that you will get a forest thinning permit from a faceless, indifferent, multi-headed, implacable bureaucracy, staffed with malevolent fanatics and insatiable leeches, who barely work four days a week, live in virtuous condos in carbon-sipping virtuous cities, and have been taught their entire lives that you are the problem.

What if, instead, you just round up some crews in trucks with chainsaws, and, for example, clear the fire roads. You just go do it. Instead of spending millions and waiting decades, you send a few men into the hills and the job is finished in a couple of weeks. Without any fuss. Then you cut firebreaks. Then you send in revitalized timber companies to thin the forests, and open a new mill.

That’s how things used to get done in America. Apply that example to everything. Farming. Logging. Ranching. Mining. Construction. Water and power infrastructure. Hospitals. Universities. Schools. Police. Crime and punishment. Government. As described, it’s all messed up today. But it doesn’t have to be.

Up until about 30 years ago, common sense and honest work mattered. Results mattered more than process. Actions mattered more than words. Things got done, they were affordable, and they didn’t take forever. But then the Democratic Party began its final, ignominious slide into what it is today—a festering parasite eating away the heart and soul of America.

3 responses to “Two New U.S. States? The Case for Jefferson and Greater Idaho”