Although Joe Biden continues to lead President Trump in most national polls, the enthusiasm gap between the two candidates could not be more striking. The situation is reminiscent of the 2016 race, only there is even less enthusiasm for Biden than there was for Hillary Clinton.

This was a Trump rally in Pa & you think Trump is losing to Biden? pic.twitter.com/ZWPas57vD2

Ok so I went to check out the Trump rally in Vegas. Even though we went early, we only made it to the additional overflow of the main outside overflow area. Despite that, thousands were singing, dancing and cheering. Haven't seen that many happy people in a long time…

As American Greatness previously documented, massive grassroots pro-Trump boat parades have been a thing all year, although they have been mostly unnoticed or ignored by the national media.

Since this spring, tens of thousands of Trump supporters (at least!) have participated in these massive, record-breaking nautical events, giving conservatives an opportunity to support the president safely and have a ball at the same time.

There have been countless more boat parades for the president all across the nation since Labor Day weekend:

Just a part of the Great American Boat Parade on Lake Lanier in Georgia. Around 1,200 boats expected ???????? #lakelanier @realDonaldTrump pic.twitter.com/ndIZu1BHso

An estimated 1,600 boats participated massive boat parade on Table Rock Lake near Branson, Missouri on Sept. 5. On the opposite side of the lake about 300 more boats sailed in support of the president, according to the Branson Globe. 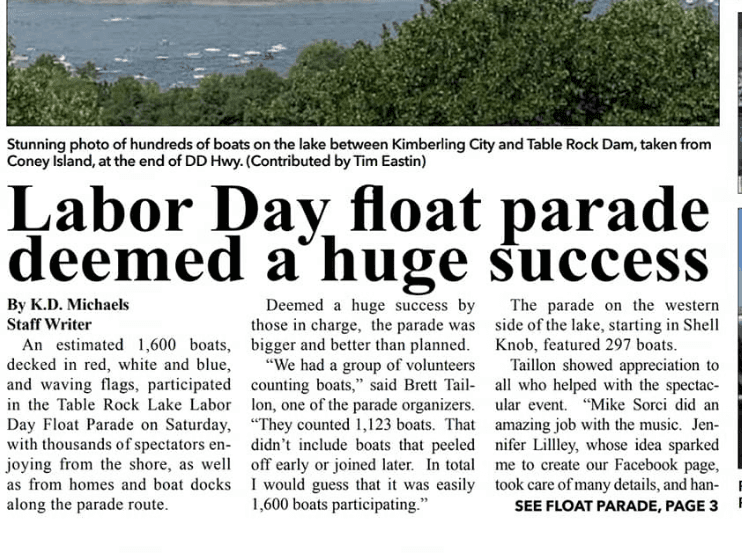 A “Trumptilla” made waves in the Washington DC area over labor Day weekend:

And they keep coming: hundreds of boats on the Potomac this afternoon in support of President Trump’s campaign as part of Trumptilla from Alexandria to the Memorial Bridge. The rally is planned to go until 5 this evening. ⁦@wusa9⁩ pic.twitter.com/dSaPFrpdV8

They just keep happening all over the place.

Thousands of boats and patriots gathering this morning in Daytona for a huge Trump rally! #MAGA ⁦@realDonaldTrump⁩ #AmericaFirst pic.twitter.com/HEuQzEFdXi

The media did its best to ignore this latest round of Trump boat parades, but a flotilla on Lake Travis in Texas did catch the New York Times’ eye because a few small boats capsized due to the massive number of vessels producing giant waves.

After ignoring the boat parades all year, The Times jumped on the Lake Travis story because it delivered that delicious anti-Trump schadenfreude its liberal readers crave. At Least 4 Boats Sink During ‘Trump Boat Parade’ in Texas, the headline sneered.

Newsweek meanwhile tut-tutted that the Labor Day weekend pro-Trump boat parades were being held “amid the COVID-19 pandemic” as if the boats were somehow guilty of violating social distancing rules.

In addition to the flotillas, conservatives have also been holding patriotic caravans to show their support for the president. These massive displays are another pro-Trump phenomenon that are being massively ignored by the MSM.

Cars, Trucks and Motorcycles for Miles! Massive Turnout for Trump Parade on I-275 Loop Around Cincinnati via @gatewaypundit https://t.co/2m1YrgvYNT

“I don’t think this enthusiasm is being properly measured in polls,” said Cuban-American director/producer Robby Starbuck.

A friend in Los Angeles happened to drive by on Ventura Blvd. in the valley as a huge group of Trump voters drove by. She filmed for 5 minutes and it was still going. @realDonaldTrump — I don't think this enthusiasm is being properly measured in polls. ???????? pic.twitter.com/qC9jnSur9D

Over the weekend, Hispanics held a massive pro-Trump caravan in Miami.

Meanwhile in Las Vegas, a city that is nearly 33 percent Latino, Biden supporters were unable to muster even 20 vehicles for a caravan that was supposed to showcase Hispanic support for the former vice president.

The caravan has arrived in front of Trump International Hotel, where they’re honking and turning around back to Las Vegas Boulevard. Everything has been peaceful thus far. pic.twitter.com/DQ52KW3ufn

The Las Vegas Review-Journal dutifully covered the modest pro-Biden event, making sure to note that the puny parade at least ended “peacefully.”

“The roughly 20-car caravan drove down Las Vegas Boulevard to Trump International Hotel, where they honked their horns, waved their signs and played patriotic music before heading home peacefully,” the Review-Journal reported.