A Washington man with a history of left-wing agitation was arrested Wednesday evening after he allegedly started a fire in the brush along a highway near Tacoma.

Jeffrey Acord, 36, was charged for reckless burning in the second degree. He is now reportedly also a suspect in two other Washington wildfires.

Acord appears to be a man of the left, according to his Facebook page.

Acord called 911 to report the fire he apparently started himself, and then livestreamed what ensued to his Facebook page.

Joint team effort!! WSP, Fife Pd and Puyallup PD just arrested a 36yr old Puyallup resident. He was caught in the median on SR-167@ Meridian setting a fire! He is currently on his way to jail! Great job everybody!#playstupidgames pic.twitter.com/8N3wHcT5kJ

Accord had drawn attention to himself earlier in the day by walking around the highway holding a lighter, according to Q13Fox.

State patrol said they had spoken with him earlier on Wednesday morning when a woman called to report a man walking on the highway in Sumner holding a lighter.

The Sumner Grade Fire in Sumner and Bonney Lake has burned more than 800 acres and was 20 percent contained as of Thursday morning.

When an officer questioned Acord, he claimed that he was looking for his $1,000 recording equipment because the camera case had supposedly fallen out of his backpack while he was biking the previous day.

“I’ve been out here all day searching for my camera,” Acord told police. “I’m trying to cover the area thoroughly.”

During his Facebook Live broadcast, Acord did an Oscar-worthy job sounding alarmed by his fire.

The fire was contained to the interstate and extinguished by the local fire department, although Puyallup Police were forced to close the northbound ramp.

“There’s nothing you can connect to me to this at all,” Acord stated before the video cut out. “I was literally calling this in.”

Acord was detained in the Puyallup City Jail with bail set at $1,000 and then transferred to the Pierce County Jail where he was booked under a separate burglary charge.

The suspected antifa militant has a history of anti-police protesting and encounters with law enforcement, court records show. According to his Facebook, Acord also attended a Black Lives Matter march in Seattle on June 5 of this year.

Previously in 2014, Acord was caught with a cache of weapons and arrested during the Ferguson Decision Protest. Officers found the man carrying a 7-inch knife in his backpack, a box of ammunition, an assault rifle, a shotgun, and a box full of illegal fireworks in his car, according to a KOMO news report. When officers contacted Acord, he admitted to carrying a loaded gun without a permit. His bail was set for $10,000. The following charges were levelled against him.

In the 2014 incident, officers reportedly found Acord carrying a 7-inch knife in his backpack, a box of ammunition, an assault rifle, a shotgun, and a box full of large fireworks in his car. 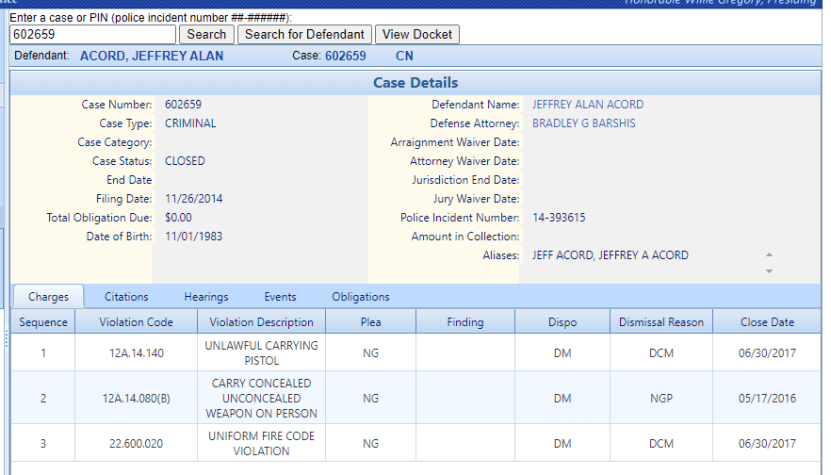 Acord attempted to justify the 2014 case as “a misunderstanding” to arresting officers during Wednesday’s arrest.

According to Protester Privilege, sources say Acord is now a suspect in two other wildfires in Washington, including the Bonney Lake fire that has burned more than 800 acres.

The Oregonian reported on Wednesday that a group of wildfires in Lincoln County may have been caused by human activity, as opposed to lightning or other natural ignition sources. These massive wildfires have have destroyed more than 2,400 acres.

At least five other individuals have been arrested for starting fires in Washington, Oregon, and California in recent days, although a connection to left-wing domestic terrorism has not yet been established.

“I am getting a lot of reports from residents of Washington State that the current wave of wild fires in Washington and Oregon may be caused or at least made worse by politically motivated arsonists,” he said. “How could their motives be political? To set fire to blame them on climate change?”

We have pretty good evidence that several of the major fires burning recently in Washington were human made but not arson. However, a larger number of the fires burning in Oregon seem to have suspicious origins and a growing number of people in Washington are reporting suspicious behavior on the part of strangers and visitors which raises concerns.

Residents of Bonney Lake told Kiro 7 news that they found broken glass with newspaper in the brush. Residents of Buckley Washington have reported similar claims in neighborhood social media groups.

According to Law Enforcement Today, federal law enforcement sources say that some of the people who started the fires may be connected, and more attacks could be on the way.

“We are reacting to a coordinated series of attempts to start fires anywhere and everywhere in Oregon. Public and Private lands, incorporated and unincorporated areas.

By all indications so far in the preliminary stages of these investigations there is a coordinated effort on the part of these individuals to start fires in areas that are the least protected and most vulnerable then slowing working their way into more populated areas and neighborhoods.

Please take this information as an advisory for you own account and welfare and please act in good faith with due diligence to plan accordingly for your own safety and the well being of your community.”