In case anyone still thinks it is, the COVID-19 pandemic is not a hoax. How and why it originated may never be known for certain. How societies ought to respond to it, and who are most vulnerable to the disease, are both topics of intense debate. But deaths in America from all causes are up year-to-date by over 200,000 compared to recent years, and while we may hope the worst is behind us, this is not over.

The single most authoritative source for statistics on deaths in the United States is the CDC website, and a way to eliminate any doubt about the cause of death is simply to bypass the categories and look at deaths from all causes.

If that number is only marginally up this year, then you can argue that COVID-19 is overhyped. If that number is up significantly, then something terrible is going on, and COVID-19 probably accounts for most of that. As it is, for 2020 through the end of June, deaths from all causes are up by 15 percent over the average for the past six years, even adjusting for population growth.

The chart below shows deaths from all causes by week, starting when flu season starts in October, with data displayed through September for the six most recent previous years, and through August 26 for the 2019-20 flu season. The pattern of deaths from all causes tracks pretty evenly across the years, roughly 50,000 people per week die in America, except during flu season, when that number increases to somewhere between 55,000 and 60,000.

While comorbidity is a factor that can trigger legitimate debate regarding who is dying and how they are dying, these overall death statistics defy manipulation. Dead is dead. And starting around January 2020, deaths in America hit around 60,000 per week, which is within the normal range but on the high side, then spiked all the way up to an unheard of 78,641 during a horrible week in mid-April, before apparently dropping to a low of 57,154 during the week of June 25, then trending slightly up after that. 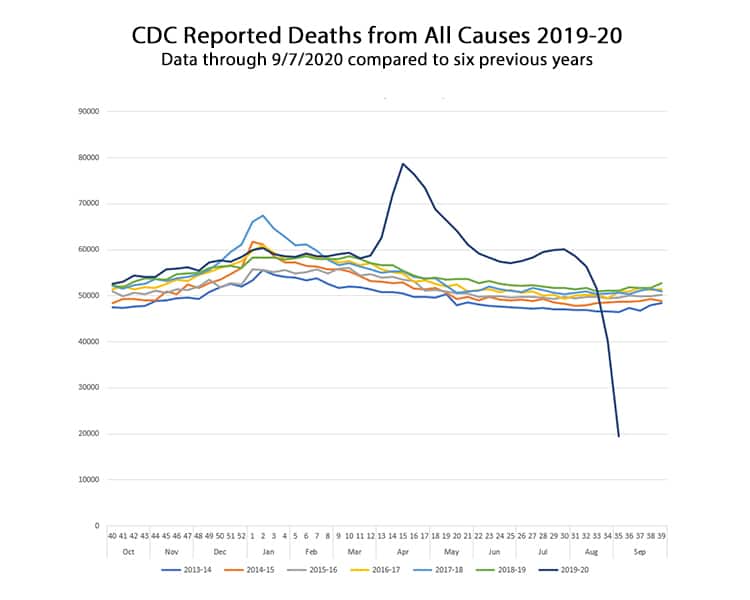 Anyone viewing the above graph needs to avoid concluding that the downward slope of the blue line representing the 2019-2020 death trend is indicative of reality. CDC data, for whatever reason, lags up to eight weeks behind. This means that any 2019-2020 weekly totals appearing on this graph after the first week in June are inaccurate and are going to rise significantly.

The next chart can provide an idea of what this means. It compares CDC data for 2019-20 as reported through June 24 (week 25) to more recent CDC data as reported through September 7 (week 35). The only reasonable conclusion is that the death rate in America in 2020 is set to remain significantly above average for at least several more weeks. 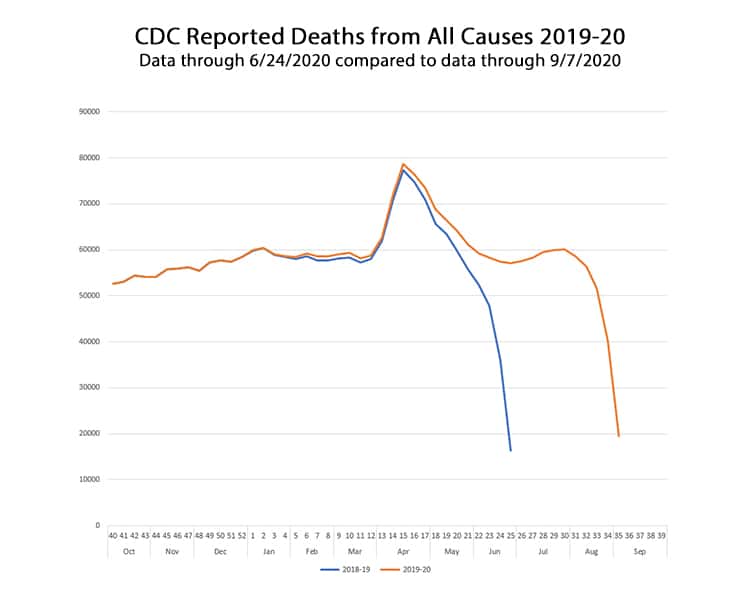 As can be seen by looking at the blue line on the chart above, the CDC on June 25 reported deaths so far for that week at 16,283. But by September 7, with most of the data for that week now submitted, the CDC reported deaths for that same week of June 25, shown on the red line, had risen to 57,154. This is an invariably consistent pattern. Weekly deaths are initially reported at a level one-half to one-third of what will become their eventual total once most of the data come in. This process takes at least eight weeks.

This chart graphically depicts the implications of this delay in reporting. A new peak is forming on the week of July 29 (the red line), with total deaths reported so far at 60,159. But this is only five weeks ago, which means the eventual total will be higher still. Subsequent weeks, where the reported numbers plummet, have diminishing predictive value.

What is beyond doubt right now is that while the unprecedented levels of death seen back in April may not be repeated, for now they are settling at a plateau around 60,000 per week which is well above levels in previous years.

Another unknown surrounding COVID-19 is whether or not a vaccine can ever be sufficiently effective to wipe it out. The disease clearly has various mutations, some more virulent than others, and flu vaccines are typically only 40-60 percent effective. Equally to the point, before a vaccine is available, and certainly afterward as well, more people will die without effective therapies to treat COVID-19.

On July 21, I described the shameful, organized suppression of public debate, or even access to information about the drug hydroxychloroquine. Ongoing trials around the world continue to indicate this drug, taken in conjunction with zinc and the antibiotic Azithromycin, has therapeutic value in treating COVID-19, although more information and study is required. But as I detailed in July, the CDC, WHO, and reputable medical journals have all dismissed this therapy as useless, even dangerous.

Just a few days later on July 25, a group of doctors held a press conference to challenge the anti-HCQ narrative, claiming it was an effective therapy for their COVID-19 patients. That video, after getting nearly 20 million views in only a few hours, was removed by Facebook and YouTube, and their website was shut down by its ISP. Versions of that video still survive on BitChute.

The next graphic isn’t included because it’s accurate. Maybe it is. Maybe it isn’t. It was found online on a Twitter account with the handle @MisaAlvo. In the discussion accompanying the graphic, there are comments that appear to question some of the data.

But showing this graphic isn’t to attest to its veracity. It’s to ask a very simple question: Why isn’t the WHO or the CDC compiling this data, and presenting this chart? Why do we have to go to “Misa Alvo,” an unknown entity existing somewhere in the vast Twittersphere, to see a report that uses such an informative layout? 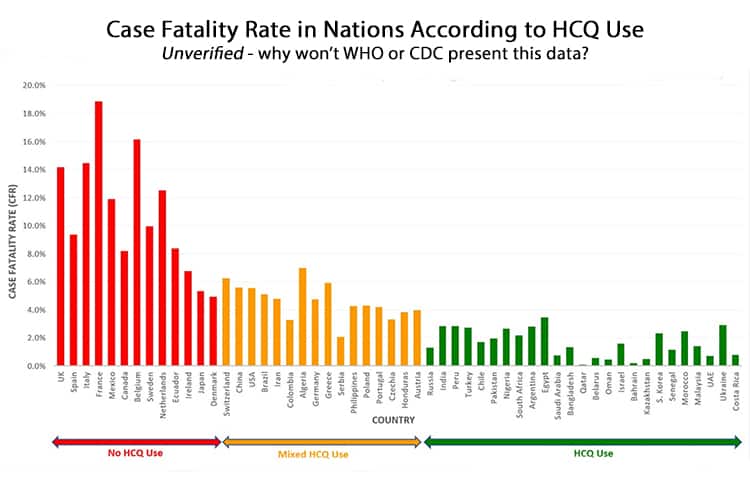 Another alternative therapy called Ivermectin shows some promise. Will information about this drug also be discredited and suppressed?

Why aren’t we hearing more about this drug? Why isn’t it being tested all over America?

We may never know what caused the COVID-19 outbreak. We won’t know if it was engineered or arose spontaneously. We won’t know if it was released deliberately or by accident. If it was deliberately released, we will probably never know who was behind it. We may never even know which precautions we took as a society were the most effective, and which ones were unnecessary or even counterproductive.

Amidst this profound uncertainty, however, we can be sure of one thing. The systematic denial of information on cheap and possibly effective therapies undermines trust in America’s institutions. Big Tech, Big Pharma, and the so-called deep state are all implicated. With people dying in numbers that are significantly and indisputably greater than normal in America, it is hard to think there are not sinister motivations behind the denial of information and access to various inexpensive and possibly life-saving treatments.

Instead, only hydroxychloroquine’s detractors have the mic, and they sprinkle their arguments with obvious, discrediting lies, such as the lie that HCQ constitutes a serious danger to the health of anyone who takes it as prescribed.

What sort of hidden agenda could be behind all this, one might ask? Is it greed? Kill small businesses and let mega corporations take full control of the economy? Develop new drugs that are fabulously expensive, and restrict COVID-19 therapies to these highly profitable choices? Mandate vaccinations and make trillions by injecting everyone?

On the other hand, maybe there’s a shared consensus among elites that now is the time to screw down the freedoms Americans have taken for granted. Or maybe the political chaos and economic misery largely caused by the pandemic can be pinned on the president, which could then result in his defeat this November.

Or maybe all of the above. Meanwhile, people continue to die.