The recent expressions of support for Black Lives Matter by professional athletes can be understood as legitimate reactions to tragic episodes of injustice that occur in the United States. But almost everything beyond that noble sentiment is flawed. “Systemic racism,” to the extent it even exists, explains very little of black underachievement, and the Black Lives Matter organization offers absolutely nothing that will help the black community.

The reality for at least the last 40 years in America is that blacks are beneficiaries of programs—college admissions preferences, incentives for minority-owned businesses, quotas towards achieving proportional representation in corporate hiring and promotions, and subsidized housing, to name a few—designed to lift up the black community. These programs have been administered at a cost that by now probably amounts to trillions of dollars.

If black activists and the politicians who pander to them for votes truly think “reparations” are justified, reparations have already been tried and are ongoing. They’re not working. They actually may have done more harm than good.

Most every citation of “systemic racism” either refers to policies that ended decades ago, or is based on flawed statistical analysis. Slavery was eliminated in 1863. Segregation was abolished in 1965. Redlining was outlawed in 1968. Starting in the 1960s, incalculable sums have been spent on systemic benefits and preferences designed to help black Americans. So much for institutionalized racism persisting in America. If anything, it’s the opposite: institutionalized anti-racism.

Statistics, at least at first glance, tell a very different story. Despite outlawing racist institutions and policies, and despite institutionalizing a comprehensive and extremely expensive assortment of preferences, policies, and benefits designed to compensate for the historical legacy of racism, according to nearly every statistical metric, blacks still lag behind whites in group achievements.

Black Lives Matter activists, along with most liberals, point to disparities in black achievement in academia and economically, as well as disparities relating to law enforcement, and claim this is proof of systemic racism. But a deeper look at the statistics does not justify this conclusion. BLM and a sympathetic media completely ignore statistics relating to law enforcement—the ones that matter—with tragic consequences.

The most prevalent, and incendiary, statistic heard is that black people are being disproportionately killed by police. If some of the politicians and pundits exploiting this supposed fact are to be believed, a genocidal slaughter is taking place. If the consequences of making these outrageous claims weren’t so tragic, they would be laughable. The statistic fails on every level.

As the chart below shows, using data from the FBI, the Kaiser Foundation, and Statista Research Inc., in 2018 a total of 209 blacks were killed by police, the overwhelming majority of them armed. This compares to 399 whites killed by police in that year.

The first thing to understand is that in a nation of over 300 million, these are ridiculously small numbers, although that’s scant comfort to the people and communities affected. The root of the claim of a police war on blacks comes down to this: If you’re black, in 2018 you had a one in 190,000 chance of having a fatal encounter with police, and if you’re white, your chances of the same were only one in 495,000. Hence you will hear that blacks are 2.5 times as likely to be killed by police as whites.

This brings us back to the crux of the issue, which is whether police encounters with blacks result in a disproportionate number of fatalities. If you look at the death per arrest rate, they do not. In 2018 (these statistics are fairly consistent from year to year) the chances of dying while being arrested were exactly the same for whites and blacks, a nearly infinitesimal 1/100th of 1 percent. 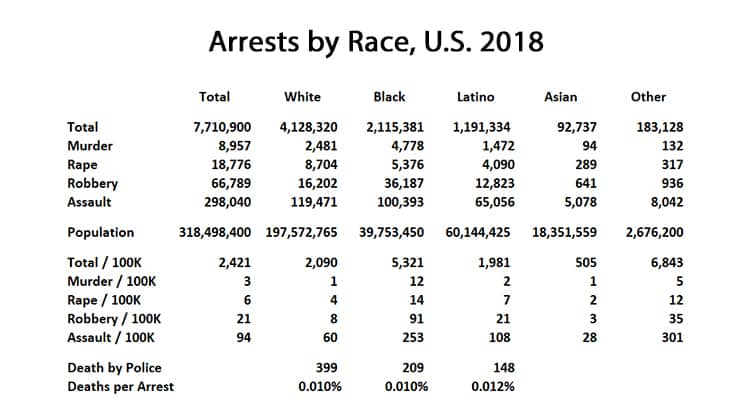 Presenting these statistics is not meant to diminish the impact of any actual police misconduct, or the necessity to reduce it as much as it is possible to do so. But this brings up another sad but inevitable statistical reality. There are nearly 700,000 full-time law enforcement officers in the United States, along with roughly an additional 1 million armed private security guards.

In groups of individuals this big, no matter how carefully screened and no matter how well trained they may be, some bad actors will exist. Similarly, when there are more than 50 million individual encounters between police and citizens every year, a few of them will have an unforeseen, avoidable, tragic outcome. People are not universally good, and everyone is fallible. Just as we shall never perfect any other aspect of our society, because that is impossible, we will never perfect the art of policing.

These are the truths that the BLM movement and all of its supporters ignore. Most know better. And there are many, many sensible alternatives to the current popular agenda, which advocates defunding the police, enforcing even stricter systems of racial preferences, paying reparations, and sliding further towards socialism.

How Professional Black Athletes Can Truly Help Their Communities

The personal qualities that enable athletes to play at the level of the NBA or NFL are not the qualities that define the rhetoric or the mentality of Black Lives Matter activists. Their entire premise, that black people are victims, even if it is true, is unhealthy. Did LeBron James or Steph Curry become two of the best basketball players in history by thinking of themselves as victims?

A black conservative who has explored this theme in-depth is nationally syndicated talk radio host Larry Elder. In a recent monologue, he asked why the work ethic that an athlete would apply to his sport cannot be applied equally to academics. “If you’re willing to spend two hours a day working on your jump shot,” he asks, “why aren’t you spending that much time working on algebra problems?”

This mentality—that individual resolve and self-discipline can overcome adversity—is something a professional athlete can explain with the credibility of his own accomplishments. Other groups in America—Chinese, Indians, Jews, Nigerians—have proven time and again that character can overcome all manner of disadvantages. All of them have aggregate group achievements in academia and household income that surpasses that of whites.

As for changing the institutions that are harming the black community, why aren’t athletes like LeBron James and Steph Curry taking an honest look at public education in the inner city? Why don’t they watch the closing arguments in the Vergara case, where Marcellus MacRae, a black attorney, proves that work rules forced onto school districts by the teachers’ union have had a disproportionate negative impact on low-income communities? Why don’t these athletes demand school choice? Why don’t they denounce the teachers’ unions, which have monopolized and all but ruined public education, especially in the inner cities?

A final argument, considered the clincher, made by social justice advocates and members of BLM is that it is the low-income status of blacks that itself explains their high rates of crime, substance abuse, broken homes, and academic underachievement. This dubious assertion is contradicted by the successful upward mobility of so many other nonwhite communities. An exhaustive data analysis on the website Random Critical Analysis makes a convincing case that racial differences in group achievement are poorly explained by economics. But so what?

Staying sober, staying married, finding a job, studying diligently, obeying the law—these are all choices that people make, and priorities that communities choose to embrace or reject. Why aren’t black athletes going into their own communities and challenging them all to make choices that will help them instead of hurt them? Why are they instead encouraging their brothers and sisters to consider themselves victims? What benefit do they see in placing the blame for black underachievement on whites, when the basis of their accusations is not well supported by data, and the cure is worse than the disease?

LeBron James, Steph Curry, and all the rest of these athletic stars have real power and influence. They are paragons of physical strength and skill. But for them to have real courage, and offer genuine help to their communities, they should review the facts, tell the hard truths, and stand up to the mob.