When U.S. Representative Alexandria Ocasio-Cortez (D-N.Y.) attacked Kimberly Guilfoyle’s discussion of her immigrant heritage at the RNC, she inadvertently reignited the issue of Kamala Harris’ citizenship. 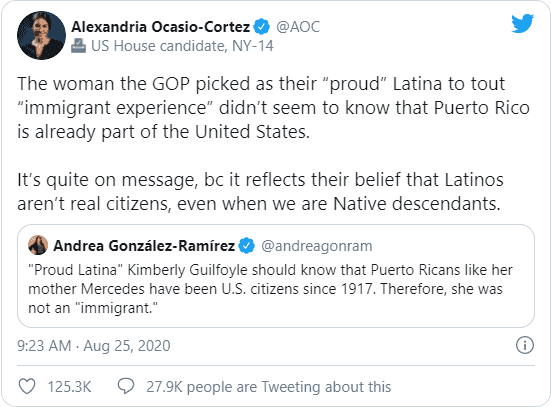 Despite what globalist open-borders advocates like AOC claim, being born in the United States does not automatically confer citizenship under the 14th Amendment. The citizenship status of the parents is crucial to the analysis.

When President Trump was asked about law professor, John Eastman’s Newsweek editorial regarding Kamala Harris’ eligibility to serve as vice president because her “father was (and is) a Jamaican national, her mother was from India, and neither was a naturalized U.S. citizen at the time of Harris’ birth in 1964,” he prompted media outrage by appropriately declining to opine on the legal substance of the question. Interpreting the precise meaning of Constitutional clauses is the role of the judicial branch, not the executive, and it’s up to Congress, not the executive branch, to write immigration statutes.

But when AOC attacked her sister Puertoriqueña regarding citizenship issues, she gave credence to the need to examine Kamala Harris’ citizenship. If Harris’ parents were not lawful, permanent residents in 1964, she was not, and potentially is not, a U.S. citizen and therefore would be ineligible for the office she is currently seeking as well as the one she currently holds.

I had to confront the same constitutional question when I previously ran for the U.S. Senate as a member of a federally recognized Indian Tribe. The 14th Amendment doesn’t make me a citizen, and it may actually fail Kamala Harris as well.

The Supreme Court first examined the jurisdictional element of the Citizenship Clause in Elk v. Wilkins (1884), holding that it was “not merely subject in some respect or degree to the jurisdiction of the United States, but completely subject to their political jurisdiction and owing them direct and immediate allegiance.”

That case dealt with the status of American Indians who ultimately received citizenship when Congress passed the Indian Citizenship Act of 1924. As a tribal member, I am not a U.S. citizen because I was born here but because of an act of Congress. If the 14th Amendment alone granted me citizenship, that act would have been superfluous.

In 1929, Charles Curtis became the first person with non-European ancestry to serve as either president or vice president. A mixed-blood Kaw Indian with Osage and Potawatomi ancestors, he could never have served as vice president if Congress hadn’t passed the Indian Citizenship Act first.

The same issue is true for Ocasio-Cortez. She was also born in the USA but is not a citizen under the 14th Amendment because she is Puerto Rican. Just as federally-recognized Indian tribes have a unique relationship with the federal government, so, too, does the U.S. territory of Puerto Rico. AOC’s U.S. citizenship is statutory—not from her birth in the Big Apple but from the Puerto Rican Federal Relations Act of 1917.

Examining whether a candidate meets constitutional qualifications for office is entirely legitimate. The media seemed to have no issue questioning the status of John McCain or Ted Cruz.

If Kamala Harris’ parents weren’t at least lawful permanent residents—and there is good reason to believe that they were not—then she isn’t a citizen under the 14th Amendment, and likely is ineligible for the vice presidency under the 12th Amendment.

The only other Supreme Court case regarding the Citizenship Clause, Wong Kim Ark (1898), held that children born to legally domiciled aliens (i.e. lawful permanent residents) are U.S. citizens, but that case did not apply to children of aliens on student visas.

Because the 14th Amendment doesn’t grant “birthright citizenship” to everyone, American Indians, Puerto Ricans, or children born to alien student visa holders are not citizens absent an explicit act of Congress.

Perhaps the more frightening realization for fetishists of unrestricted immigration is that if children born to alien parents on student visas are not birthright citizens, then the children of illegal aliens will certainly never be enfranchised to vote in American elections on that basis.

As evidenced by its actions in 1917 and 1924, Congress alone has the power to grant citizenship to those not covered by the 14th Amendment. Democrats’ repeated refusal to consider anything other than open borders torpedoed any chance that such commonsense immigration reform would pass. They may have unknowingly compromised their own vice presidential nominee in the process, with AOC providing additional targeting information.