Online predators have used the same web software as Wikipedia and Wikifan sites to design what they describe as a place to record “our history and our culture” for men attracted to boys, or as they are called by everyone else: pederasts. The site’s administrators are connected to the Free Spirits Council, an international network of people from multiple countries seeking to normalize pedophilia as a legitimate sexual orientation and social behavior rather than the predatory exploitation of children that it is.

In order to shield themselves from professional or legal scrutiny, members of the FSC maintain strict anonymity. The resources provided by this network of websites are specifically geared toward connecting advocates of liberalizing social and legal constraints on pedophilic behavior while skirting the current laws governing them. On the surface this is already disturbing to the rational reader; but it turns out that it’s not illegal. These platforms may act as a venue for others to connect and engage in illegal sexual conduct. Thanks to a lax legal structure and a burgeoning new effort to legitimize deviant adult attraction to children, they may be able to get away with more than just advocacy.

The site in question is called BoyWiki, and along with the Free Spirits, it operates parallel sites in French and German. Like many other pedophile social circles, its log is a maze in the shape of a triangle. The counterpart website for adults attracted to minor girls is called AnnabelleLeigh/GirlChat and functions only as a message board, and states up front concrete rules for speech on the site in order to prevent illegal material from jeopardizing the site.

The creators of BoyWiki call themselves and its intended audience “boy lovers” and on its main page the site has a “Did you know. . .” section informing users of an online message board “for boy lovers all over the world.”

This is not the first such site to attempt to organize information for such a community. Newgon.net, now an inactive site available only in archived form, operated for several years as a wiki website dedicated to the broader purpose of supporting all of the attraction combinations, and it includes pages for debate guidelines on justifying adult-child physical contact and “testimonials” of historical cases that attempt to show such contact in a positive light.

One such testimonial cites a book by sociologist Floyd Martinson in which a girl interviewed describes a forcible rape by her father. The fact that the writer was searching for source material for positive anecdotes and this was the best that could be found is a window into the delusional mentality of the people involved. Newgon.net would also feature articles critical of anti-pedophile “vigilante” organizations such as the defunct blog Absolute Zero United. Both Newgon.net and BoyWiki classify Absolute Zero as a “hate campaign,” even though their function has mainly been to monitor gatherings of pedophiles for illegal activities.

There is also IPCE (the International Pedophile and Child Emancipation) and the better-known NAMBLA (North American Man-Boy Love Association), two advocacy groups that compile long-form academic and literary websites for scholarly discussion about the “emancipation of mutual relationships between children or adolescents and adults.” In the past these groups would attempt to hold meetings where the men involved would gather supposedly to advocate lowering the legal age of consent. The real function of these get-togethers, however, would often be to exchange and distribute sexually explicit materials involving minors.

NAMBLA was formed in the late 1970s just as the gay rights movement was attempting to eliminate sodomy laws and other restrictions. One of the events that triggered its formation was the 1978 arrest of 24 Boston men in a raid where they were discovered to have lured boys between the ages of eight and 14 into their clutches by using drugs and video games. A segment of the area gay community formed a campaign called the Boston/Boise Committee to oppose the prosecution of the men, and NAMBLA eventually evolved out of it. Among those who lauded the efforts of the committee was a little-known Massachusetts state representative named Barney Frank. He would come out as the first openly gay congressman in 1987.

In 1993 Adi Sideman, an Israeli-American sophomore at NYU and child sex abuse victim, filmed “Chickenhawk” which included in-person interviews with NAMBLA members and activists. Considered one of the most disturbing documentaries of all time, the film allowed the subjects to describe their attraction in their own words, often showing the warped way that they misrepresented their interactions with children as young as seven years old as expressions of interest. One of the most haunting subjects of the film, Leland Stevenson, would be arrested on a second child pornography charge in Florida years later. Sideman closed the film, after the credits, with a ghoulish monologue in which he warns opponents of pedophilia that “your day is over . . . when it [suppression of pedophilia] breaks, it is going to break suddenly.”

By this time, the broader gay rights movement had ostracized NAMBLA. According to the group’s leading light David Thorstad, lesbian activists began to urge for a break from the movement as a result of NAMBLA’s inclusion. While Thorstad protested that such adult-child relationships were common between women and girls as well, all available data shows that the overwhelming majority of child sex offenders are men. And while the majority of sexual abuse victims are girls, it is believed that male cases are underreported. In the 2000s NAMBLA was weakened both by the stress litigation and infiltration by activists seeking to expose pedophile identities and activities. It is no longer a functioning organization.

While the “informational” resource provided by BoyWiki is troubling, it is entirely legal so long as there is no explicit sexual content or incitement to illegal activities. But BoyWiki’s supposedly informational purpose masks a more sinister service: networking for members of the community. One article permanently featured on the main page  (unlike Wikipedia which changes theirs daily) is for “BoyLand,” a message board for pedophiles. BoyWiki also has on its main page a link to the Free Spirits Council’s own message board BoyChat. 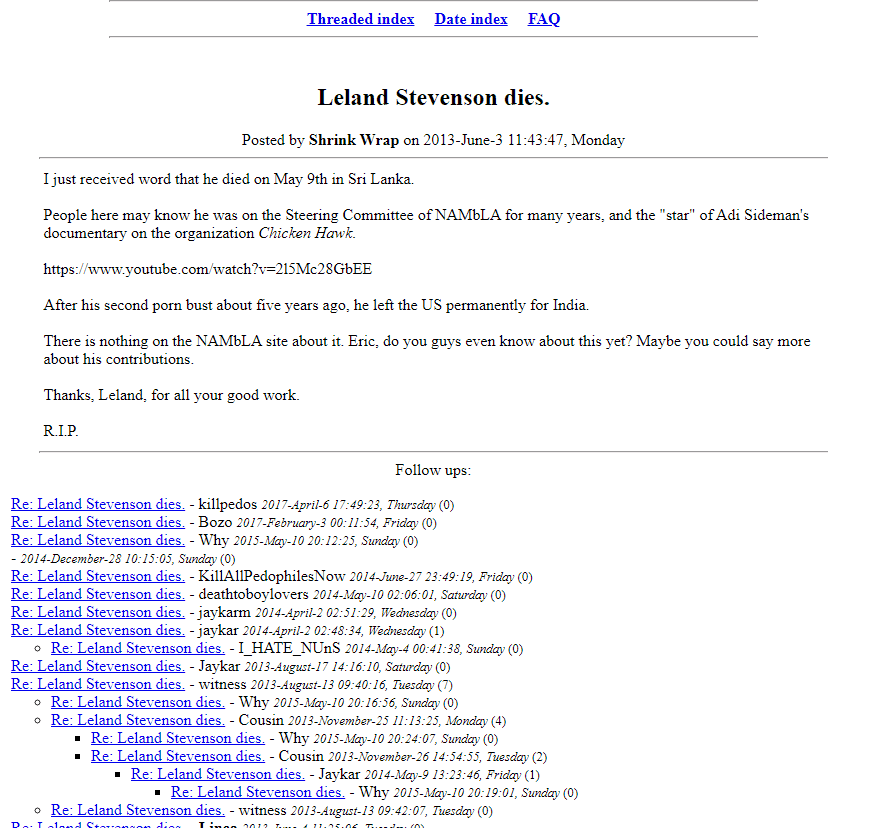 Other resources once used to promote BoyWiki and likeminded forums were the semi-functional WEIRD-PM Radio, Ethos Magazine, and formerly the Enchanted Island. All of these were creations of a person named “Kermie” who according to BoyWiki died in October 2016. These were all used in order to direct listeners and readers about ways to reach out and contact other “BLs” (boy lovers). The news presented on the WEIRD programs invariably skewed to child-centered topics. In his last broadcast before his passing, Kermie referred to a child prodigy and high school graduate as a “9-year-old man.” He would go on to conclude by saying that “the world is changing” and the time is coming when “BLs” would be accepted as any other sexual lifestyle would. If it sounded like he was echoing Leland Stevenson, it may not be a coincidence.

When Stevenson died in 2013, a forum user posted a tribute thanking him “for all your good work.” One of the men paying tribute, Eric Tazelaar, would tweet in 2019 a random photo of a boy wearing a shirt with the caption “Pizza is my jam” and much of his feed concerns what he considers the severe nature of sex offender laws. In a 2016 Vice article on the state of NAMBLA (or what’s left of it), Tazelaar claimed that changing public opinion about such sexual activities would take decades. Thanks to well-meaning but misguided efforts of government researchers, however, his goal is on the fast track in some countries.

In 2018 Madeleine van der Bruggen, a psychologist with the Netherlands’ National Rapporteur on Trafficking which researches child sex crimes, delivered a now-infamous TEDx Talk. “I truly do believe that every person is longing for love at some point in their life,” she said. “And what if this love that you really wish for will forever be impossible? That must be a very lonely situation to be in.” She then went on to deliver a spirited appeal to think of pedophiles as a sexual orientation and called for “clever solutions” and pleaded with the audience to imagine an acquaintance or relative being arrested.

This section will be a lot of preaching to the choir, but adult-child sexual relationships, whatever their level of acceptance in other cultures, are not shown to be healthy according to any existing study. According to a Temple University study in 2019, youth before the age of 18 attain adult cognitive capacity at an average age of 16, but psychosocial maturity only at the age of 18. This “maturity gap” contradicts the notion that younger teens and children who have attained neither of those mental competency levels are capable of making decisions about sexual relationships.

Another study from 2013 featured in World Psychiatry found that adults who had a history as child sex abuse victims were more prone to suicide and that the earlier the abuse occurred, the more frequently the subject would attempt suicide. There is no countervailing evidence that sexual abuse supports mental health. A 2019 Oxford University review of academic literature on the topic reveals that such activity has been linked to more frequent occurrence of later life health problems ranging from borderline personality disorder to obesity.

With the advent of the sexual liberation movement of the 1970s, normalizing previously taboo sexual lifestyles among adults, advocates of adult-child sexual relationships saw an opening to promote themselves as victims of persecution as well. In West Berlin in the 1960s, psychologist Helmut Kentler proposed that denial of sexual urges among children by their parents would make them into “sexual cripples.” Thanks to the receptive government of Mayor Willy Brandt, Kentler was able to receive funding to place homeless children with male pedophiles beginning in the early 1970s and continuing for decades. Many of the men who became foster parents and subsequently exploited the sheltered children were themselves educators at top-flight German universities and an elite private boarding school.

The content of BoyWiki and the Free Spirits Council websites blatantly echoes the same sentiments of NAMBLA and other pro-pedophilia advocates like those of the Kentler study, yet it carefully avoids the sharing of explicit sexual content and encourages users not to disclose private information or their own activities. In preparation for this story, I contacted the National Human Trafficking Hotline, the Internet Crimes Against Children Task Force (ICAC), and local police. An ICAC representative acknowledged by phone this week that the task force is aware of the BoyWiki website, but declined to respond when asked if it is under investigation.