When it comes to memes, “COVID-19 Cured Pneumonia” is a good one. Its obvious implausibility immediately directs the reader to consider the underlying allegation, which is that pneumonia deaths are being deliberately understated in order for the Centers for Disease Control to reclassify them as COVID-19 deaths, thus fanning public panic.

When there’s a meme, there’s an image. To support the phrase “COVID-19 Cured Pneumonia,” there is a graphic representation of CDC data that appears to show a precipitous drop in pneumonia cases at precisely the time when COVID-19 cases were precipitously rising.

Depicted below is the graph behind the assertion that “COVID-19 Cured Pneumonia.” On the surface, it’s awfully convincing. 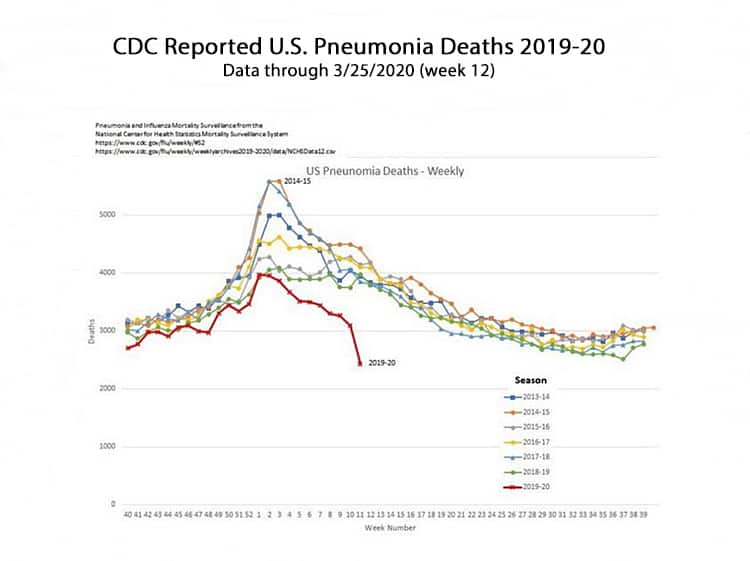 It references an official government source and the data on the downloadable Excel spreadsheet is faithfully rendered in the graph. And wow! Compared to the previous six years, this year far fewer people are dying from pneumonia.

The problem with this graph, and the accompanying meme, is that, as the CDC discloses on their Daily Updates of Totals by Week and State, “it can take several weeks for death records to be submitted to National Center for Health Statistics (NCHS), processed, coded, and tabulated.” The first chart used data as reported to the CDC through March 25. The next chart, below, uses data gathered for an additional three months, through June 24. The differences are striking. 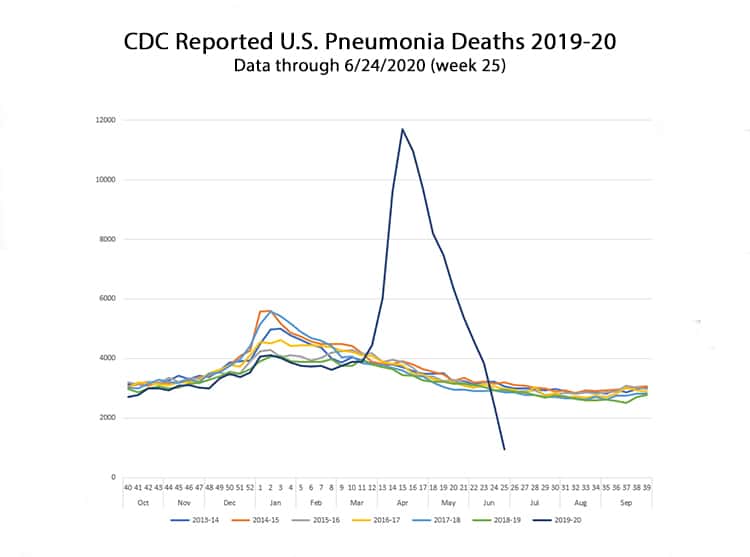 What appears to have happened around the tenth week of 2020, in mid-March, is completely different on the earlier chart compared to the more current one. On the chart that went viral, which purported to indicate what might even be deceit on the part of the CDC, deaths from pneumonia plummeted, dropping from around 3,100 during week nine to only around 2,400 during week 10. On the later chart, using complete data, weekly deaths from pneumonia were averaging around 4,000 per week in mid-March, and by early April had surged to nearly 12,000 in a single week.

For this reason, it is premature to assume that much if any of the drop showing in pneumonia deaths later in April and onward is real. We don’t know yet.

The COVID-19 pandemic is impossible accurately to dissect and analyze. Obviously the differing policy responses and differing media interpretations are evidence of differing political ideologies and agenda. But what happened with the “COVID-19 Cured Pneumonia” meme should remind everyone, regardless of their perspective, to dig beneath the surface.

“COVID-19 Cured Pneumonia” is false both on its humorous surface but also in its clever insinuation. No matter how far you dig into the labyrinth of data surrounding COVID-19, it remains untrue.

When data is inherently difficult to parse, and the consequences of misinterpreting the data are so serious, it is vital to dig beneath the surface of clever phrases and charts. It is imperative to rebuke what is clearly misleading, no matter how much it reinforces our preexisting opinions.

As it is, even the CDC appears unsure of how to characterize COVID-19. There have been allegations that deaths around the country are being reclassified as COVID-19 deaths, and that co-morbidities are present in almost all deaths. This however is why isolating and reporting just deaths from pneumonia is indicative. Clearly this year there are far more people dying from pneumonia than in previous years. In April 2020, pneumonia deaths were more than triple what they had been any of the previous six years.

This is unambiguous data. Prior to 2020, the six-year average deaths from all causes in the United States during the five-week period encompassing the month of April was 266,839, with the largest deviation from that average in any year topping out at only 6 percent. This year, during the same period, deaths are up by 88,560 over the average, a 33 percent increase. Something horrible is going on.

It is important to debate the efficacy of masks, social distancing, hand washing, and the whole shutdown. It is important to point out the rampant hypocrisy of encouraging riotous protests over social justice while condemning any crowd formed in favor of a conservative cause. It’s important to wonder why we’re locking down the healthy instead of just protecting the vulnerable. And it’s probably true that COVID-19 is reasonably easy for a healthy young person to beat. But this disease is a mass murderer, and all debates ought to acknowledge that context.

When President Trump calls COVID-19 the “Chinese virus,” he’s right. COVID-19 was spawned in the Wuhan “wet market,” a horrific public slaughterhouse where virtually any living cellular organism is for sale, ready on-demand to be dismembered while still alive. The Wuhan wet market is a fetid, barbaric throwback that disappeared from developed Western nations well over a century ago.

But who can say so? Who can, with abundant justification, condemn these “wet markets,” in all their filth, squalor, and hideous brutality? Racists? Nationalists? Western chauvinists? White supremacists? Trump’s deplorable minions? Why is it appropriate to throw our Constitution’s Bill of Rights out the window in the name of a health emergency, yet it is stigmatized as racist, and subject to online censorship, to unequivocally identify and condemn the source of this virus?

COVID-19 not only exposes some of America’s cultural absurdities. It challenges both the pieties of the globalist Left, and the principles of the libertarian Right. Because COVID-19, for all the havoc it is inflicting on this nation and around the world, could well be just a prelude.

For all we know, only a distant microbial ancestor of COVID-19 was spawned in the Wuhan wet market. There is evidence it was designed in a Chinese lab, ostensibly in an effort to experiment with vaccines and treatments. If so, was it released from this lab accidentally or on purpose? Mao used to boast that his nation could absorb hundreds of millions of casualties in war, and emerge relatively unscathed. So why not? And the Chinese, for their part, have accused the Americans of creating and spreading the virus.

One thing is certain. Viruses exist today that are capable of making COVID-19 look like a mild cold. Far more infectious, far more persistent on surfaces and in the air, and far more deadly, these designer diseases are stored in labs and military depots all over the world. Should any of them ever be unleashed, Americans will be glad they had a dry run, coping with COVID-19.

This fact should make everyone wonder as objectively as possible about how Americans respond to COVID-19. Maybe we shouldn’t have shut down the economy, this time. Maybe we’re going to be paying for that for many years. But what are we going to do when the big one comes? What sort of collective skills will we need to have as a nation?

To that question, libertarians, as usual, have no answer. “Collective” anything is anathema to them. Nationalists should recognize that next time could be different, much worse, and that what they perceive as an unconstitutional overreaction this time might be a condition of survival next time. And globalists, liberals, the whole woke mob, God bless ’em, will need to shut up when we have to shut the borders, and they will need to stop apologizing for our enemies.