A 33-year-old Black Lives Matter supporter was arrested Tuesday night in connection with the shooting of an SUV driver during a riot in downtown Provo.

Jesse Taggart, of Salt Lake City, “was booked into the Utah County Jail and held on charges of attempted aggravated murder, aggravated assault causing serious bodily injury, rioting, threatening the use of a weapon during a fight or quarrel, criminal mischief, and firing a weapon near a highway, according to Provo Police.

As American Greatness reported on Tuesday, video footage of the altercation on Monday showed someone shooting into a white SUV while it was being mobbed by violent agitators.

Zoomed in and slowed down video of the anti-police militant firing a handgun into the vehicle as it attempted to escape the mob. pic.twitter.com/qsAIb24NG2

The driver reportedly suffered a gunshot wound, but the injury was not life-threatening.

In addition to Taggart, police also arrested 27-year-old Samantha Darling, of Ogden,  “on charges of obstruction of justice and rioting.”

Samantha Darling, 27, of Ogden, Utah, was arrested at the Black Lives Matter riot in Provo. She's been charged with obstruction of justice & rioting. Her social media posts are filled with support for BLM. https://t.co/LG7vv72U8G pic.twitter.com/3t2FVSWbq2

Taggart wrote: “a aggravated driver [sic] drove up and onto the curb/sidewalk to pass 6 or 8 cars held up in the lanes due to protestors [sic] occupying the intersection and declaring first amendment rights of peacefully gathering and assembly of free speach. [sic] Deciding to forcefully and with a lifted SUV [sic] drive into and through the protestors [sic] flinging one into the air and slamming the pavement along with a dozen others rammed to get allegedly shot for doing so. [sic]

“The Provo Police Department extends its thanks to citizens who gave evidence and testimony to investigators and to allied agencies and officers who assisted this investigation, notably Ogden and Salt Lake City Police Departments,” Provo police said in a statement announcing the arrests.

An investigation into other criminal acts connected to the street demonstration in Provo is ongoing, police said.

“If you have information about the identity of persons involved in damage to vehicles, please contact Det. Nick Patterson at npatterson@provo.org,” Provo Police tweeted.

Provo’s Mayor Michelle Kaufusi released a video statement about the violent demonstration Tuesday, saying that “the violent events of the protest were unacceptable” and stressing that she did not issue a stand-down order.

“I have been very upset about the events last night. Crimes were committed, and our police response was inadequate,” Kaufusi said. The mayor added that she has spoken to a family member of the shooting victim, and that she felt terrible for him and his family.

In a Facebook event post. the group instructed the participants to “wear all black”, “wear masks” and “wear protective eye gear.”

Please wear all black
Wear your masks
Bring water
Wear protective eye where if you got it
This is a counter protest to Provo Back The Blue!

“Sometimes you have to pick the gun up to put the Gun down,” the “Salt Lake City Antifascist Coalition” said in its post. 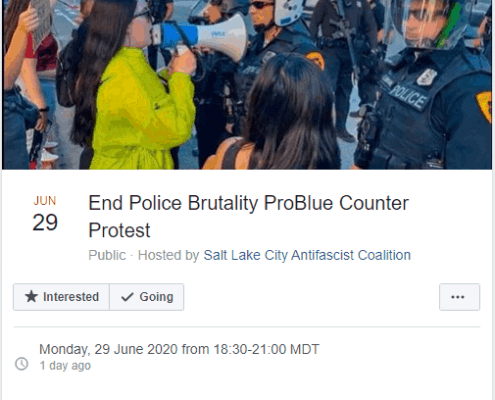