The rains bypassed sunny California in January and February, encouraging talk of another drought. California’s last drought was only declared ended about a year ago, after two wet winters in a row filled the state’s reservoirs. To cope with the last drought, instead of building more reservoirs and taking other measures to increase the supply of water, California’s policymakers imposed permanent rationing.

This predictable response ignores obvious solutions. Millions of acre-feet of storm runoff could not only be stored in new reservoirs but also in underground aquifers with massive unused capacity. Additional millions of acre-feet could be recovered by treating and reusing wastewater, and by joining the rest of the developed nations living in arid climates who have turned to large scale desalination.

All of this, however, would require a change in philosophy from one of micromanagement of demand to one that emphasizes increasing supply.

To understand why a focus on increasing supply is vastly preferable to reducing demand, it helps to know just how much water California’s urban residents consume compared to other users.

As a matter of fact, the average California household purchases a relatively trivial amount of water from their utility, when compared to how much water they purchase in the form of the food they eat. For this reason, reducing residential water consumption will not make much of a difference when it comes to mitigating the effects of a prolonged drought.

Put another way, Californians divert 65 million acre-feet of water each year for environmental, agricultural and urban uses, and the planned permanent 25 percent reduction in water usage by residential customers will only save 0.9 million acre-feet per year—or 1.4 percent of total statewide water usage. One good storm easily dumps 10 times as much water onto California’s watersheds as would be saved via a 25 percent reduction in annual residential water consumption.

Armed with these facts, there’s a strong argument that cutting back on residential water consumption will not make a significant difference in California’s overall water use. Some additional facts could put this argument into an even sharper context: How much water do California’s households consume in terms of the water that was required to grow the food they eat, and how does that amount compare to the water they purchase from local utilities for indoor and outdoor use?

The “Water Footprint” of Food per Ounce and per Calorie

While the information to determine this is readily available, it isn’t typically compiled in this context, so here goes.

The best source of comprehensive data on the “water footprint” for various types of food comes from the Water Footprint Network, a project initially funded by UNESCO. An excellent distillation of that information was produced in April 2015 by Kyle Kim, John Schleuss, and Priya Krishnakumar, writing for the Los Angeles Times. Information on calories per ounce was found on the website “fatsecret.com.” Information from these various sources is summarized on the following table. 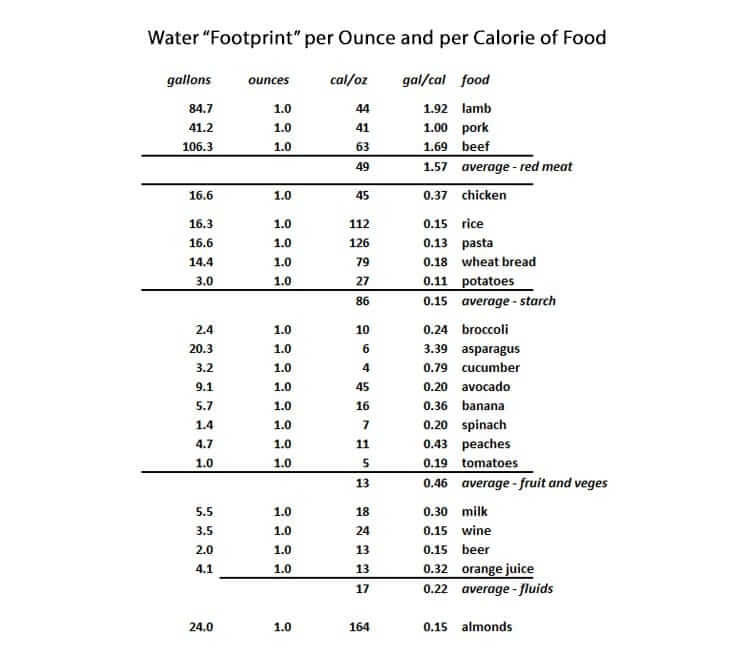 As the chart shows, when evaluating the water efficiency of various food sources, it is misleading to rely only on gallons per ounce, since the number of calories per ounce can be highly variable. But putting these two variables together to calculate a gallons-per-calorie measurement is quite useful.

How much water does it take to feed the average household in California, and how does that compare to the amount of water they buy from the utility for indoor and outdoor use?

The next table provides this estimate based on a typical diet. The estimate of 2,000 calories necessary to sustain the average human (men, women, children) comes from WebMD. The breakout of food consumption by category, while somewhat arbitrary, relies on data on “the average American diet“ compiled by researcher Mike Barrett, writing for the “Natural Society” website. In turn, Barrett relied on USDA and other government sources for most of his data, which is reflected here.

By the way, it is irresistible to point out that drinking water, that quantity each human requires for their daily hydration, based on the 0.5 gallon per day recommendation from the Mayo Clinic, comes out to a paltry 0.0016 acre-feet per year per household—not even a rounding error when compared to the other uses. Think about that the next time you have to ask for your water at a California restaurant.

There Is No Reason Water Cannot Be Abundant and Affordable

For decades, when it comes to water, California’s policymakers have prioritized demand restrictions instead of supply enhancements. This is consistent with their priorities in other critical areas, certainly including energy and transportation.

“Induced demand,” the idea that if you build it, more will use it, is the nightmare axiom that governs this policy. It certainly would never have to do with the possibility they’d rather put all those operating funds into their pay and pensions instead of bolstering and expanding public infrastructure.

The problem with this, however, is that eventually the conservation option begins to yield diminishing returns, and then all you have left is punitive rationing. And once via punitive rationing you have wrung all of the redundancy and surplus out of the system, you have no resiliency if any part of the system fails. That is where California is today. The abundance choice is the only viable option if Californians are to improve their quality of life. In no particular order, here are some reality checks that California’s voters and elected officials ought to consider:

1)  Projects that increase water supply via sewage reuse, runoff storage via reservoirs or aquifers, and desalination, are options that benefit all users, urban and agricultural.

2)  Increasing the supply of water from diverse sources creates system resiliency which can be of critical benefit not only in the face of persistent drought but also against catastrophes that may, for example, disable a pumping station on a major aqueduct.

3)  The energy costs to desalinate seawater, approximately four kilowatt-hours per cubic meter, are overstated. Desalination plants can be co-located with power plants, eliminating power loss through transmission lines, whereas far-flung pumping stations consume significant amounts of electricity. Depending on transmission loss and desalination plant efficiency, the amount of lift beyond which desalination consumes less power than pumping is only about 1,500 feet.

4)  Public investment in water-saving home appliances, for example through tax rebates to consumers who purchase them, by contrast, do not increase the overall supply of water.

6)  One preferred way to reuse household sewage is referred to as “indirect potable reuse,” where the treated water is percolated into aquifers where it is eventually pumped back for household reuse. This practice has the virtue of banking the water against supply disruptions, recharging the aquifer which is especially beneficial in coastal areas where there can be saltwater intrusion, and even, as water is repeatedly cycled through the aquifer, causing an ongoing improvement to the quality of the water in the aquifer as treatment progressively reduces levels of undesirable residual toxins.

7)  While achieving 100 percent reuse of sewage will render indoor water conservation pointless, the virtues of outdoor water use are understated. Healthy landscaping, consisting of abundant vegetation including lawns, reduce the incidence of dust-borne pathogens, reduce the incidence of asthma, and clean and moisturize the air. Replacing grass playing fields with artificial turf introduces toxins, causes more ACL and other sports injuries, and retains heat—often to the point of making these faux fields unplayable unless they are, ironically, watered.

Policies designed to reduce household water use are a good idea, but must be kept in perspective. What has already been done is more than enough, and priorities now must shift towards investment in infrastructure to increase the supply of water. Nearly all water diversions in California, about 90 percent, are either to preserve ecosystem health or to supply agriculture. Indoor water overuse is becoming a myth, and will become entirely irrelevant as soon as 100 percent sewage reuse capacities are achieved. Outdoor water use should not be thoughtless, but allowing grass and perennials to die, or converting landscaping to “desert foliage,” is a cultural shift that is not necessary or desirable.

Along with investing in infrastructure to increase the supply of water, public education to help Californians adopt healthier diets would have the significant side benefit of being sound water policy. A trivial change in patterns of food consumption yields a major reduction in water required for food. For example, a public education campaign that caused a voluntary 10 percent reduction in red meat consumption (from 25.0 percent of all calories to 22.5 percent of all calories) would reduce California’s water consumption by 2.5 million acre-feet per year. By comparison, total outdoor residential water consumption in California is estimated at only 1.8 million acre-feet per year.

Perhaps, in lieu of renouncing escalating and entirely unnecessary mandates to reduce household water use, those of us who love our lawns might at least be granted a waiver if we were to present an annual affidavit to document our below-average consumption of red meat.

Our smart refrigerators might actually submit the report to the utility, sparing us the paperwork.