Both of these practices distract from more important questions: Are student applicants academically competitive? Are faculty applicants experts in their fields? In reality, California’s public universities have moved far away from these fundamentals. And as goes California, so goes the nation.

Prioritizing race and gender diversity over academic excellence has consequences, not the least of which is how those who object to these priorities are intimidated. Abigail Thompson, professor and chairwoman of the Department of Mathematics at UC Davis, is one of the most recent victims.

In a letter published by the American Mathematical Society, Thompson objected to the “diversity statements” that are now required of all faculty applicants, and which she claims have become “central to the hiring process.” Thompson compared these diversity statements to the “loyalty oaths” that were required of University of California faculty members during the 1950s.

One specific example Thompson cites describes how these diversity statements are scored. Using UC Berkeley’s official “rubric to assess candidate contributions to diversity, equity, and inclusion,” she shows how if a faculty applicant asserts that they will mentor and treat “all students the same regardless of background,” they will earn a score of one or two, on a scale where “one” is the worst and “five” is the best.

This example epitomizes the problem with the entire emphasis on “diversity, equity, and inclusion.” It has moved beyond equal treatment to specifying preferential treatment, according to a dizzying array of intersectional categories of disadvantaged status.

As Thompson puts it, making diversity into a political test governing hiring decisions “should send a shiver down our collective spine.”

The response to Thompson’s opinion on “diversity statements” is, if anything, more chilling than the political litmus test she was criticizing. More than 600 people, presumably all math faculty from universities around the country, signed a letter addressed to the American Mathematical Society titled, “The math community values a commitment to diversity.” The letter accuses Thompson of making “dangerous” and “ignorant” claims of reverse racism which have an “unsavory” history in and beyond higher education.

But the letter doesn’t address Thompson’s primary point, which was that “requiring candidates to believe that people should be treated differently according to their identity is indeed a political test.”

Someone who probably typifies the politically correct activist that is even starting to dominate mathematics departments in America’s colleges and universities is Chad Michael Higdon-Topaz, a professor at Williams College. On a since-deleted Facebook post (a screenshot of which may be found in this article) Higdon-Topaz wondered how Thompson would “think this stuff,” characterizing it as “false equivalencies and both-sides-ism.” He recommended his followers “tweet at UC Davis, Thompson’s institution, to provide some good ’ol public shame.”

For his trouble, Higdon-Topaz has earned his own share of public approbation. As political scientist John C. Drew wrote at his “Anonymous Political Scientist” blog:

Academics offended by the extremism of Chad M. Topaz, a woke Williams College math professor, have organized a petition in response to his campaign to silence Abigail Thompson, a white female math professor at UC Davis. You can read and sign the petition here. So far, the petition has been signed by over 725 people including the chairman of his own math department, Richard De Veaux and four winners of the prestigious Fields Medal including David Mumford and Terence Tao. Colin Adams has told The College Fixthat signatories also include eight former presidents of the American Mathematical Society (AMS).

Maybe, just maybe, members of the academic community have had enough. Or maybe not. The diversity bureaucracy in America’s colleges and universities has acquired stunning power and reach. On the Public Records Act-enabled online database “Transparent California,” take a look at these 2018 search results for job titles that include the word  “inclusion,” or “diversity.” Note that taxpayers funded a position for Jerry Kang, UCLA’s vice chancellor for equity, diversity and inclusion, that bestowed a total pay and benefits package worth $468,919 in 2018.

The answer to this FAQ “Why Require an EDI Statement” deserves to be quoted in full:

First, much like a candidate’s CV, research statement, or teaching statement, an EDI Statement provides the hiring committee with relevant, useful information about a candidate’s qualifications and potential for future success. Second, the request signals that the department genuinely values equity, diversity, and inclusion. For new hires, this signal will make it easier to attract a diverse pool of applicants, including individuals from groups that remain underrepresented in the field or discipline. For promotions, this request helps to deliver on the APM’s promise that contributions to equity, diversity, and inclusion will actually be credited and not ignored. Finally, as peer institutions increasingly adopt these practices, failing to ask for an EDI Statement may signal tepid commitment to these values, which could put UCLA at a competitive disadvantage.

Nothing chilling about that.

“Useful information” regarding a candidate’s “potential for future success.” “Signals” that the department “genuinely values equity, diversity, and inclusion.” Easier to attract a “diverse” group of applicants, including “underrepresented” groups. Promises contributions to “EDI” will not be ignored when granting promotions. And, ominously, “failing to ask for an EDI statement” could put UCLA at a “competitive disadvantage.”

The Biggest Flaw of Diversity Mandates

The experience of Asian Americans provides irrefutable proof that “underrepresented communities” can achieve whatever they want in academia, or anywhere else in America, if they are sufficiently talented and possess the work ethic and focus necessary for success.

Here is evidence that race and privilege have zero impact on academic potential if, and it’s a big “if,” members of a culture work to be successful: 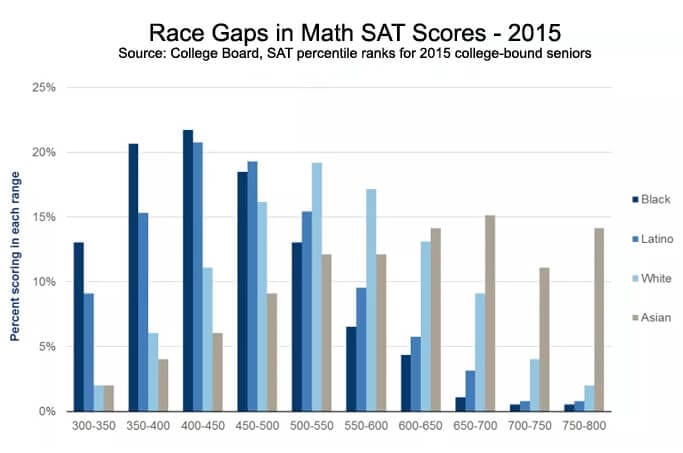 Perhaps Jerry Kang could explain why, as the above chart depicts, nearly 15 percent of his Asian cohorts nearly aced their math SAT, and in 2019 the median score for Asians was 84 points higher than the median score for whites. With this stellar performance, Kang might also explain why Asians might still require the services of his office.

The reason students in some identifiable ethnic groups underperform in school should not be oversimplified. But the experiences of America’s Asian immigrants, many of whom arrived as refugees with nothing but the shirts on their backs, offer strong evidence against the need for an expensive diversity bureaucracy. What was it that Asians brought with them to America that enabled them to succeed despite the supposed depredations of a white racist power structure?

The next chart, below, shows that 82 percent of Asian families with children under 18 have two-parent households. This is higher than whites (73 percent) and far higher than blacks (33 percent). Could it be that intact families, along with cultural values emphasizing hard work and education, might explain nearly all the disparity in academic achievement between ethnic groups in America? Why not? Asian immigrants, by and large, arrived in America with nothing, arguably encountering just as much racism as members of other ethnic groups, yet they are the most successful group in America today. 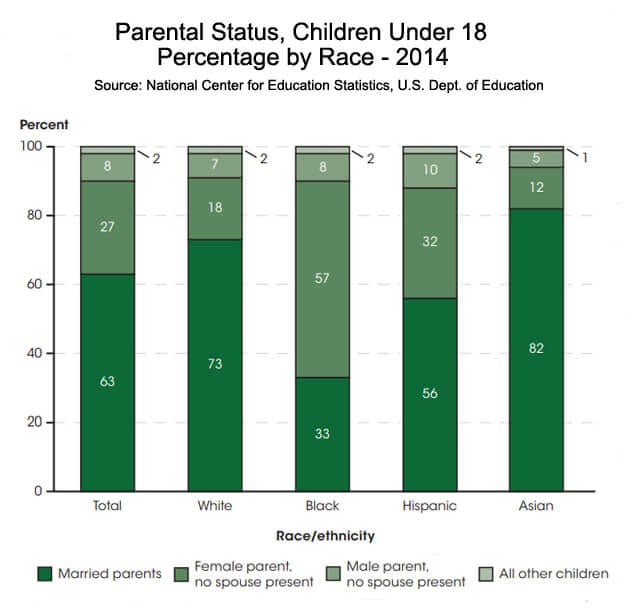 Lowering Standards Instead of Raising Expectations

It is impossible to create conditions of perfectly equal opportunity in any society. Overreaching in pursuit of that goal creates more problems than it solves. Mediocrity, double standards, and mutual resentment are some of the many negative consequences when you lower standards instead of raise expectations.

The diversity warriors say never mind all that. They insist on lowering standards in order to enforce racial quotas in college admissions. Despite the fact that SAT scores are a reliable predictor of success in college, they are being modified and in some cases eliminated entirely. How they are being modified is a classic example of the diversity mentality gone wild. SAT scores are going to have a third section. Along with math and verbal aptitude, there will be an “adversity score.”

While developing an adversity score to skew SAT scores upwards for students from disadvantaged backgrounds has an undeniable appeal to anyone with modern sensibilities about “social justice,” it has nothing to do with measuring a college applicant’s ability to do their coursework.

But many schools aren’t even bothering with an adversity score, they’re scrapping the SAT entirely. This is being done despite the fact that SAT scores are the only completely uniform, totally objective criteria available to admissions offices.

It is delusional to mandate “inclusion” to the exclusion of setting objective standards. Unqualified students are admitted in the name of inclusion and diversity, then fail to succeed academically, while qualified students who could have done the work are denied an opportunity. This harms both of these students, and writ large, it diminishes the intellectual capital of the nation.

And what about the most brilliant professors, experts in their fields, who have no time for filling out “diversity statements” for commissars who make more than they do? Why should they bother? The best among them can work anywhere in the world.

The sad part of the diversity bureaucracy isn’t just the obscene expense that translates directly into higher tuition costs, or the fact that many capable applicants for student and faculty positions are passed over in favor of the politically anointed. It is their delusional message that race and ethnicity and gender matter more than hard work and academic achievement. This runs counter to everything positive in the American experience. It is backed up by selective facts and biased social “science.” It should be challenged at every opportunity.